The recently released #10254 LEGO Creator Holiday Train is so adorable that it basically sells itself. We have already discussed the train in a general review (see: LEGO Holiday Train Review, Thoughts & Tweaks), and I this Brick Breakdown series I would like to discuss some of the interesting building techniques found in the set, which makes it even more special. So let’s take a look. 🙂

When we discussed the #79111 LEGO Lone Ranger Constitution Train three years ago (Brick Breakdown: LEGO Constitution Train), we mentioned a prominent challenge with LEGO trains: on curved tracks there is a limit on how long a train engine or car can be to still be able to handle the curvature of the tracks. The LEGO Creator Holiday Train comes with a full circle of curved tracks, and it includes a number of interesting solutions to address the train vs. curved tracks issue.

While this is not really a solution, but more like avoiding the situation to begin with, keeping the engine and the cars shorter than on a regular train, is definitely something to consider when you are building your own LEGO trains that you would like to run on tight curves. 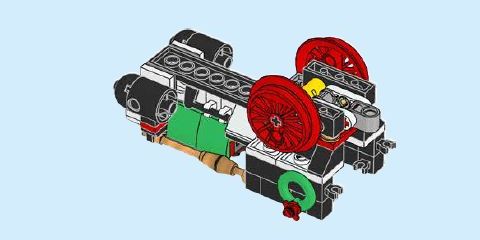 The next feature you will likely notice is that while the big driver wheels are connected together, they are able to move independently. This allows for the inside wheel to turn less, as the outside wheel make up the difference. The only drawback with this technique is that it may make it tough to hook it up to a motorized drive system. 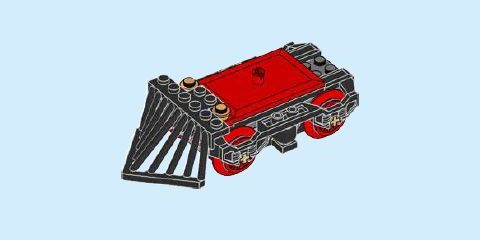 The next method is a common solution amongst not just LEGO train fans but model train enthusiasts in general. The wheel-assembly with the cowcatcher at the front uses both independent wheel rotation and a single pin connection to the body of the engine. This means that the wheels can work apart from the movement of the engine they are supporting. You can use this solution both on train engines and on long train cars. 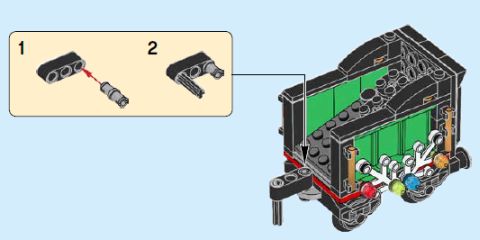 One of the features of the LEGO Winter Village sets that I really like is the inclusion of small minifig-size toys. You can learn quite a bit about LEGO micro-building, and interesting building techniques by studying these small models. Some of these mini toys are better than others, and the LEGO Creator Holiday train includes several mini models that I would consider great, some mediocre, and some not so good.

Let’s take a look at from worst to best. The wind-up toy car in concept is a fantastic idea. It starts like every good miniature; with the smallest identifying detail well chosen – in this case the minifigure roller-skate used as wheels. The body is a single 1×2 jumper-plate topped with a 1×1 clear plate. All is good so far. However the wind-up key added at the top is too big for the mini car, and really throws off the proportions. And because the key is the most distinct piece, it is hard to make out what the rest of the model suppose to be. In short, the whole thing just looks like four pieces connected together randomly rather than anything in particular.

Next up is the little boat. The flag/wing piece definitely makes a good sail. The bar attachment is particularly clever because it connects the sail, while also shapes the prow of the ship. And the rounded liftarms add good shaping and color to mimic a boat’s body. All in all, this is a good design, but the odd connection points are a bit distracting. 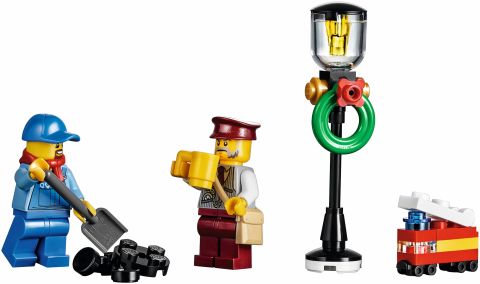 It is very clear with the little fire truck what it supposed to be. It’s nothing fancy, but there is nothing awkward about it either. The colors, the shaping, and the scale are all in line. And it is also a solid little model that won’t fall apart easily. Nicely done.

The small spaceship is built around a single core that is often used for interesting small builds. It has studs on four sides, as well as a small round extension at one end. With a few sloped bricks and plates, it dressed up to become a tiny spaceship. It doesn’t have any moving functions, but it is fun to swoosh it around.

We also get a small toy robot in the set. It has moving parts, distinctive features, and is quite functional as well with clips for arms that can rotate and grab things. A very nice little build indeed.

The largest minifig-size toys in the set is the miniature train that is set up around the Christmas tree. It comes with an engine, a coal car, and three passenger cars. While the cars are not connected, it is easy to line them up on studs so they look like a real toy train. This is another solid micro-model.

With micro-models you do need to make some compromises because of the small scale. First select a key feature that tells people that “this is a …”. Next, choose parts with shapes and colors that support the key feature. Then with some creativity and luck you may be able to add some functionality like a moving ladder, turning wheels or grabbing hands, etc. Finally, you put the model into context. This may be a micro city, a forced perspective section of a larger diorama, or a toy for a minifigure. Stick to these points in roughly the same order, and you will have a reliable guide to creating successful LEGO micro-models.

If you run your LEGO trains on tracks with tight curves, you do need to consider the length of the engine and each of the cars. If they are too long, you can utilize some of the techniques found in the LEGO Creator Holiday Train (and other LEGO trains) to give them more flexibility to handle more difficult curves better.

Miniature LEGO creations are about stripping away the non-essentials to focus on the essence of the model that still keeps them recognizable on a small scale. Once you find that key feature, you can establish the sense of scale, and start building from there. You will have to fully utilize the shape and functionality of each piece, which requires that you are familiar with a wide variety of parts and willing to take the time to experiment with them. You can find the LEGO Creator Holiday Train at the Online LEGO Shop. 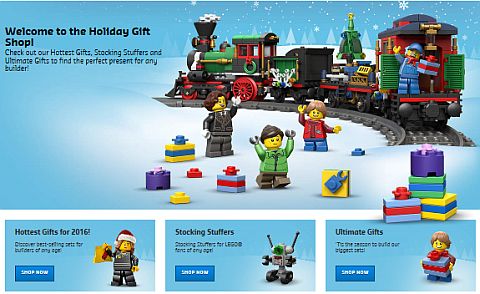 So what do you think? How do you like the LEGO Creator Holiday Train? And what do you think of the building techniques used here? Did you learn something new that you can incorporate in your own creations? Feel free to share your own tips and ideas, or ask questions in the comment section below! 😉