A very interesting set in The LEGO Batman Movie line is the #70904 LEGO Batman Movie Clayface Splat Attack. The main character is the brick-built Clayface, and you also get a couple of regular minifigures. The total piece count is 448, and the price is going to be $34.99 when the set becomes available in January. Considering that this set is pretty much just Clayface, you might wonder if it is worth the price tag. So let’s take a closer look. 🙂 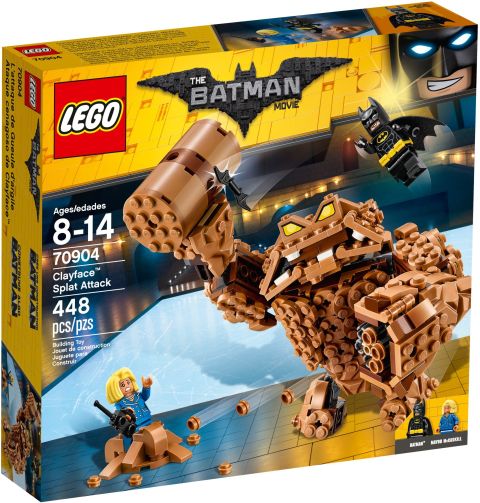 The two minifigures included in the set are Batman and Mayor McCaskill. Batman is the same as in the other sets in the series, with the new yellow utility-belt and a couple of Batarangs. The cape is the newer softer type, which feels nice. Mayor McCaskill comes with a walkie-talkie and a rather nice new hair-piece in a bob cut. Her skin color is what LEGO calls nougat (flesh on BrickLink), which adds some interesting ethnic diversity. She is a completely new character to the Batman Family of titles, and will be voiced by Mariah Carey in The LEGO Batman Movie. Both minifigures have dual faces with different facial expressions. 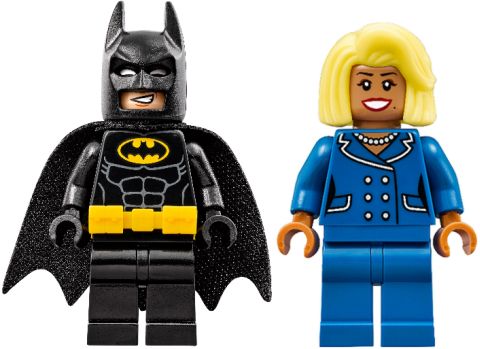 The rest of the set is taken up by the giant Clayface. As a character, there have been multiple Clayfaces over the years. However, the most notable one is Basil Carlo, who was a former movie star turned crazy. Along his journey, he gained the ability to shape-shift and melt people. It is unlikely however, that The LEGO Batman Movie will use his people-melting power.

While in the #70907 LEGO Batman Movie Killer Croc Tail-Gator we previously reviewed (see links at the end of this post) the large figure of Killer Croc is a specially moulded bigfig, Clayface here is completely brick-built. The shaping is mostly done with heavily layered plates, which makes the figure surprisingly heavy and dense. It also worth noting that Clayface looks good from every angle – in contrast with most other brick-built figures, that usually look good from one side only. The layered plates also aid in the lumpy appearance, which is very appropriate for this character. 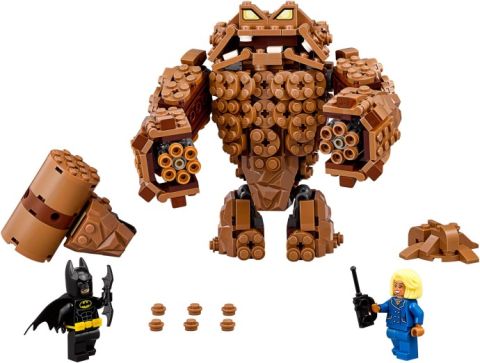 As far as movement, Clayface can turn his head, as it is on ball-mounting. The shoulder-joints are on clicking hinge-joints, which means they can move away from the body, as well as rotate. The elbows and legs are on large ball-joints, so they can achieve fairly fluid motion.

For action elements, there is the small mud trap a minifigure can stand in. Clayface also got two mud hands with built-in mini-guns. Each gun can hold six 1×1 round plates, and with a simple turn they go flying. You can also remove one of the mini-gun hands and replace it with the large hammer hand. In the video-review below you can see how it all works.

The set contains a good amount of interesting parts. First of all, note the large number of plates in that delicious medium-nougat color (medium-dark-flesh on BrickLink) The four half-cylinder panels that make up the hammer are a new part that only appeared in a couple of sets so far. Also, even though Batman’s utility-belt is in practically every set, it is worth mentioning it as a very useful accessory. And as I mentioned earlier, Mayor McCaskill’s hair is a new piece. Also noteworthy are Clayface’s eyes, which are printed on the side of a couple of slopes. 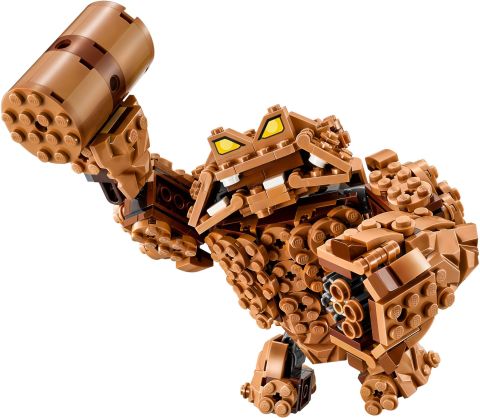 There are a couple of building techniques I wanted to touch upon as well. The first involves sculpting, while the other deals with creating color definition. Both are used in every part of Clayface’s body, and contribute to the very high piece-count of the set. When it comes to sculpting, we tend to find distinct features and then do our best to bring them out. In this case, Clayface is more about a lack of distinction. So two methods were used to soften the features.

First is creating depth. The figure still needs to look like something, so LEGO designers found all the high points that needed to stick out on the character, then gradually sloped away from these points. This gives us the dominant shape of the figure. Next, all the sharp corners needed to be eliminated, so there is a heavy use of rounded plates and slopes. Everywhere there would be a hard edge is replaced with something curved. This tricks the eye into seeing a much softer shape.

The more interesting technique (at least to me) is the creation of high color definition. Because so many round plates are used, it means you can see more of the pieces under the outer layer. So instead of using more of the nougat color and make the model look flat, LEGO designers opted to use reddish-brown and black underneath for extra highlights. To be more precise, black is used for shadowing, and reddish-brown for subtle variation to give the illusion of sharper defined colors. Very clever.

All in all, I would say that this set is surprisingly complex. In fact, it would probably be more enjoyable to older kids, rather than the recommended age-range of 8-14. I think an 8-year-old would probably not appreciate the unique building techniques, and they might even have trouble with some of the more fragile sections during building.

I will also add that I’m not a big fan of the price. While the piece-count does warrant it, and you definitely get your money’s worth in the very substantial Clayface, there is not much else here for LEGO fans to be excited about. I think around $29.99 would be a more reasonable price for those who would really like to get this set for Clayface or the parts. So you might wait a little until the set goes on sale, and in the meantime pick one of the more interesting sets in The LEGO Batman Movie Collection. Some of them can already be found at the Online LEGO Shop.

What do you think? How do you like The LEGO Batman Movie Clayface Splat Attack? Is this a set you are planning to get? Feel free to share your thoughts in the comment section below! 😉