As we have discussed previously (see: LEGO DC Super Hero Girls Sets Revealed!), a new LEGO theme was introduced this month, called LEGO DC Super Hero Girls. The sets are based on a new franchise launched last year by DC Comics and Mattel, where well-known DC Super Heroes are dealing with the awkwardness of growing up and attending high school, with the added stress of having superpowers. The franchise includes a mini-movie series, books, action figures from Mattel, and now LEGO sets. 🙂 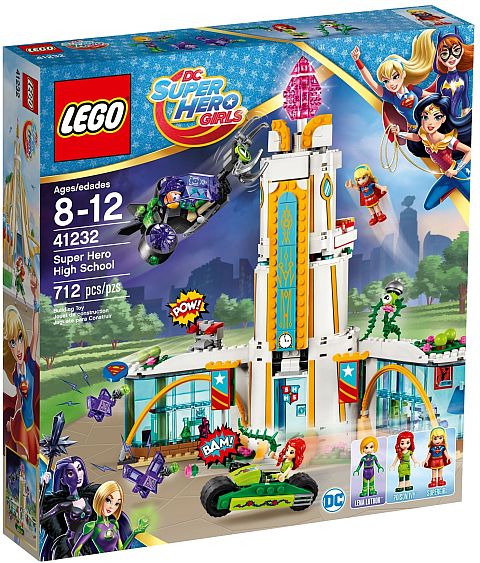 Three of the LEGO DC Super Hero Girls sets have been released already, and there will be more to come next year. As the franchise is aimed at pre-teen girls, all of the sets feature LEGO Friends-type mini-dolls, which replicate the original characters really well. The packaging of the sets is a very nice and gender-neutral light blue with white stars, and the DC Super Hero Girls logo prominently displayed next to the LEGO logo. The sets themselves also have a mixed color-scheme with some interesting combinations. Below we will look at the three sets already available in more detail. 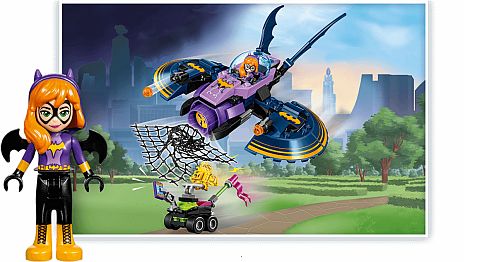 ➡ #41230 LEGO DC SUPER HERO GIRLS BATGIRL BATJET CHASE: This set features a cool dark-blue, dark-purple and lavender Batjet, with a net-shooter at the front, and some stud-shooters at the sides. The vehicle of choice for Batgirl to chase a Kryptomite who stole her smartphone. Sounds like a typical high-school squabble. This set is proving to be very popular with both boys and girls. Who can resist such a sweet little Batjet? Here is the official description: Join in the action-packed LEGO DC Super Hero Girls world as Batgirl battles the yellow Kryptomite for her stolen ePad. This great set features a Batgirl mini-doll figure, the Batjet with opening cockpit, stud-shooters on the wings and a net-shooter at the front, plus Kryptomite buggy with an ePad and a fearful yellow Kryptomite. 206 pieces. Price: $24.99 – BUY HERE 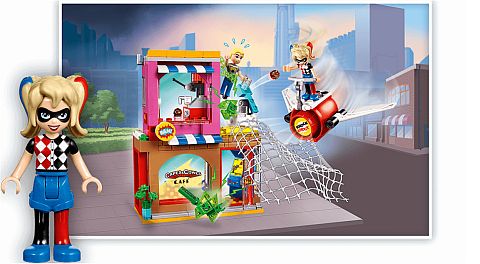 ➡ #41231 LEGO DC SUPER HERO GIRLS HARLEY QUINN TO THE RESCUE: Here we get two mini-dolls and two cute brick-built Kryptomites. The small café is quite colorful, with a cupcake catapult and an arcade machine. Sounds, again, like a typical high school scene. Herley Quinn’s jet is very minimalistic, with a standard LEGO net-shooter outfitted with nothing more than a pair of wings and a handlebar. I would say that apart from the mini-dolls and the Kryptomites, this set is the weakest. It is just too small with not much going on. Here is the official description: Join in the action-packed LEGO DC Super Hero Girls world as Harley Quinn battles the mischievous green Kryptomites at the Capes and Cowls Café. This great set features Harley Quinn and Steve Trevor mini-doll figures, a two-level café building with a cupcake catapult and rotating arcade machine, plus Harley Quinn’s jet with movable wings, a net shooter, and two mischievous green Kryptomites. 217 pieces. Price: $29.99 – BUY HERE 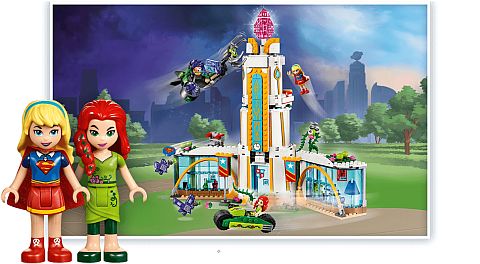 ➡ #41232 LEGO DC SUPER HERO GIRLS HIGH SCHOOL: This is the largest LEGO DC Super Hero Girls set that we know of at this point. The original building is quite difficult to represent in LEGO, due to the dramatically curvy structure (see below), but LEGO designers did a great job capturing the overall shape and color-scheme. I wish though that they used pearl-gold instead of yellow for the highlights at the front. The school measures over 11” (30cm) high, 12” (33cm) wide and 3” (10cm) deep, so it is quite large. And there is a lot going on inside the building as well, with two classrooms, lockers, a cafeteria, and more on three different levels. 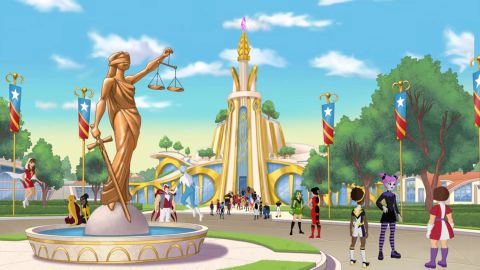 The building has some very surprising transformational features. First of all, the side-wing can be removed and configured in different ways. Also, the not-yet-released #41235 LEGO DC Super Hero Girls Wonder Woman Dorm Room can be attached to make the school even larger. But the most unusual features spring to action when the school transforms into defense mode with a ramp that lowers and launches Poison Ivy’s motorbike, and various hidden shooters. Watch the video review below to see things in action.

And there is more! We already mentioned Poison Ivy’s motorbike with a plant shooter, and then there is also Lena Luthor’s jet with rotating thrusters and rotating gripping-claws at the front. The story here is that Lena Luthor is trying to steal the valuable amethyst at the top of the school building with the help of the purple Kryptomites. This set really does have a lot of fun play-features. Perhaps the only negative I could say about it is the large number of stickers that need to be applied very carefully to look good. 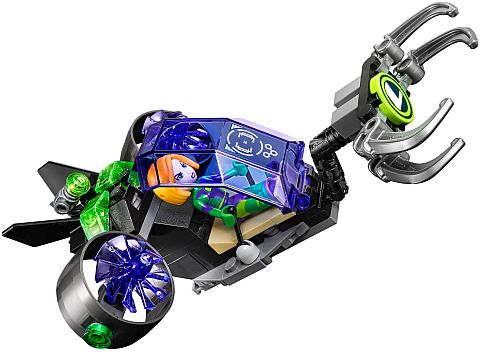 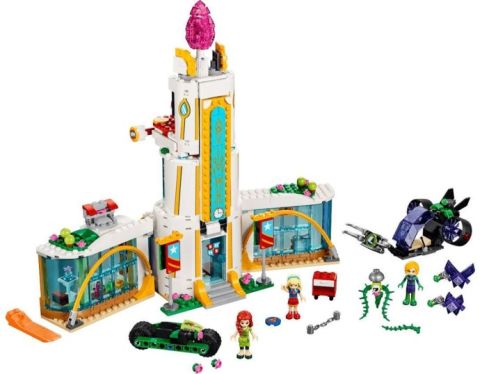 From the three sets released so far, the Super Hero High School appears to be the strongest. It is large, looks good, has a really interesting selection of parts and accessories, and so many play-features. So if you are at all attracted to this collection, the school is a worthy buy. If you just want to try out the sets with something smaller, the Batgirl Batjet Chase is definitely fun. As I mentioned earlier, I feel that Harley Quinn to the Rescue is the weakest in the collection, but it does come with two unique mini-dolls and Kryptomites, even though the building itself is very small. Perhaps adding it to the school would make it more useful.

You may have noticed that I haven’t really said much about the mini-dolls yet. And that’s because they are my absolute favorites. LEGO designers put incredible effort into making these mini-dolls look adorable, and as close to the source-material as possible. I’m particularly excited for the new female hair-pieces, which of course can also be used with regular LEGO minifigs. It is also worth noting that the Kryptonites are a different color in each set, so they can be fun to collect. I don’t think they will ever become as popular collectibles as the baby dragons in the LEGO Elves line, but they do come with interesting translucent and printed pieces.

What do you think? How do you like the LEGO DC Super Hero Girls sets released so far? Did you get any of them already? Or are you planning to? And how to you like the mini-dolls and the Kryptomites? Fee free to share your thoughts and own review in the comment section below! 😉