The LEGO Batman Movie Collectible Minifigures Series was officially released at the beginning of the month (and in some locations it was available even before that), I have been having a really hard time finding them in stores. I guess they are very popular. If you do find them, keep in mind that this series has 20 different minifigures (instead of the usual 16), so it will take a while to identify them all. A nice feature of this series is that the distribution is completely even, so in a full box of 60 minifigures you will find three complete collections. 🙂

Before we discuss how to identify The LEGO Batman Movie Minifigures in the blind bags, I’m going to share with you the video-review of the series by JANGBRiCKS, so you can take a close look at each of the characters, and decide which one(s) you like best. 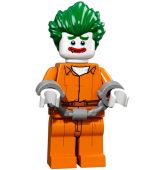 ➡ LEGO Batman Movie Minifigures Arkham Asylum Joker: The easiest way to identify this minifigure is to find the handcuffs. However because Barbara Gordon also comes with handcuffs, you need to take an additional step to differentiate the two minifigs. The best way to achieve this is to feel for the hairpieces. The Joker’s hair is surprisingly large and round with some sharp detailing that lets you know it is just a very stylized hairpiece. Also keep in mind that if you find a small 1×1 round tile or 1×1 square plate, then you have Barbara instead of The Joker. 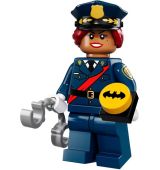 ➡ LEGO Batman Movie Minifigures Barbara Gordon: When I was identifying the minifigures, for some reason I kept finding the 1×1 square plate that comes with this minifig. However because there are a lot of small elements in this series, they are not good indicators for identifying the characters. It is best to either find the handcuffs and then differentiate her from The Joker by the hair, or just directly look for her hat/hair combination with the flat top. I would say that finding the handcuffs is easier. 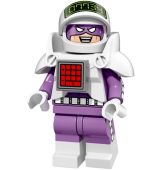 ➡ LEGO Batman Movie Minifigures Calculator: Given all the accessories this minifigure got, I was surprised to find that it was the helmet visor that was easiest to feel for. It sort of feels like a large fingernail clipping (sorry for be gross, but it’s true). The rest of the accessories are too large, too small, too plain, or too similar to other accessories to be of much help for easy identification. 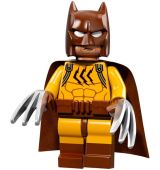 ➡ LEGO Batman Movie Minifigures Catman: This minifigure is difficult to identify, and the process is quite frustrating. This is because the claws, that are otherwise unique to this character, often get tangled up with the new utility-belt – which means that they feel different every single time you try to identify them. If you got either the Wolverine or the Werewolf from the LEGO Monster Fighters sets, you would be familiar with how the claws feel, but it is still easy to mix them up with Vacation Batman’s flippers. In my experience, it is best to focus on finding the utility-belt. It’s the size of a 1×2 plate, but has some edges. Just be warned that if the piece is entangled with the claws, it will be harder to identify. 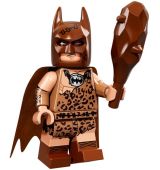 ➡ LEGO Batman Movie Minifigures Clan of the Cave Batman: The big club is the ticket to find this minifigure. It is like a thin rod on one end, fat and bulby on the other end, with a bit of texturing on the surface. There is no similar accessory in the entire series, so it can’t be mixed up with anything else. This is one of the easiest minifigures to identify. 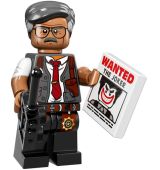 ➡ LEGO Batman Movie Minifigures Commissioner Gordon: Chances are you will find the 2×2 tile, which is easy to identify. However there are two other minifigures in this series (Eraser and Harley Quinn) with 2×2 tile pieces, so it is not the best way to narrow down this character. Instead, it is best to look for the walkie-talkie. Its thin antenna and two-stud base with handle should be recognizable by most LEGO fans. 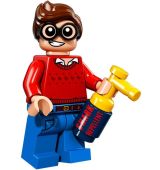 ➡ LEGO Batman Movie Minifigures Dick Grayson: Not very many accessories here, so the best way to find this minifigure is by looking for the small tap that makes up the top part of the shark repellant can. It’s that little “L” shaped piece with a round end that is often used as a faucet in LEGO kitchens. It is probably the most unique small accessory in the entire series, so should be easy to identify by anyone. The hairpiece feels too generic, and the 1×1 round brick is too similar to the accessories of other minifigures. 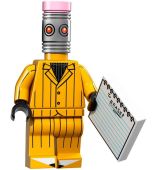 ➡ LEGO Batman Movie Minifigures Eraser: Finding this minifigure is a two-part process. First, locate the 2×2 tile, but remember that two other minifigures have this piece (Commissioner Gordon and Harley Quinn). So, we will confirm Eraser by looking for the head, which feels like a standard 1×1 round brick. You might also find the small 1×1 round tile, but most likely you will find the head first as it is larger. Don’t go just for the head though without the tile, because it can easily be mixed up with Dick Grayson’s shark repellant can. 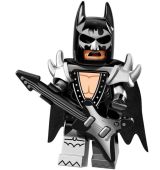 ➡ LEGO Batman Movie Minifigures Glam Metal Batman: This minifigure is very easy to find. Just look for the guitar. The neck of the guitar is a standard bar, and it flairs out a bit on one end, and more at the other end. Sort of like a LEGO double feather piece, but larger. I would also note that this is a new print for the guitar, which collectors will likely appreciate. 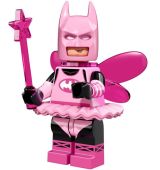 ➡ LEGO Batman Movie Minifigures Fairy Batman: While there are a number of interesting accessories that come with this minifigure, my preference is to feel for the wings piece. It is large, so you can’t miss it, and the shape is quite distinct. The wand is a decent second choice, but might get confused with Pink Power Batgirl’s Batarang. So best is to stay with the wings. 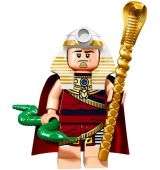 ➡ LEGO Batman Movie Minifigures King Tut: You will most likely find the headgear as it is pretty large, but because of the unusual shape, you might find it confusing. The scepter is another options, but it can be mistaken for the guitar. My suggestion is to look for the snake, as it has a very distinct shape that is easy to feel for, and can’t be mistaken for anything else in the series. 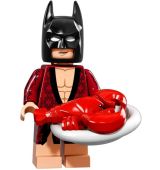 ➡ LEGO Batman Movie Minifigures Lobster-Lovin’ Batman: This minifigure is very easy to identify. Just look for the large plate. You won’t mix it up with the ducky inner tube of Vacation Batman, because you can easily feel the bottom of the plate. Don’t worry about trying to find the lobster, as it is a new piece, and would be hard to identify by touch alone, plus it is very similar to Zodiac Master’s crab. 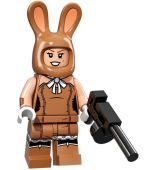 ➡ LEGO Batman Movie Minifigures March Harriet: She has two accessories that are easy to feel for. The gun is quite large, and feels like a Tommy gun. And you can also search for the bunny ears headgear. Both pieces are big enough, so you won’t have to fumble around for long to find them. Also, there are no other accessories to distract your search. 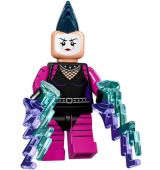 ➡ LEGO Batman Movie Minifigures Mime: While the lightning pieces are fairly large, they are so thin it is easy to miss them as you search around the packets. For this reason, I would suggest looking for the Mohawk instead. It has a slightly rubbery texture, which prevents it from moving around too much. And it kind of feels like a miniature taco, and I love tacos! 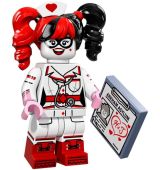 ➡ LEGO Batman Movie Minifigures Nurse Harley Quinn: It is best to look for the 2×2 tile first, as this would narrow the choices down to three minifigures (Harley Quinn, Eraser, and Commissioner Gordon). Once you got the tile, you can search for the hairpiece. The large pigtails are fairly simple to pick out. I like to grab one pigtail, then see if I can find the other one by working my way down the piece I’m holding. There is also the nurse’s cap, but it is so small, it may take a while to find. 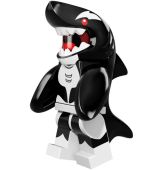 ➡ LEGO Batman Movie Minifigures Orca: If you ever searched for the previously released Shark Suit Guy, you know what to look for. The large shark/Orca costume is has a big, bulbous head, and distinct set of fins. I like to grab the tail and work my way up to find the mouth to be sure. The piece is so large that it bulges through the baggie, which is another indication that you might have the Orca. 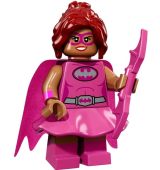 ➡ LEGO Batman Movie Pink Power Batgirl: If you have the LEGO Disney Collectible Minifigures Alice or Mini Mouse, you would already be familiar with the skirt piece. It is hard plastic, oval shaped like paper cupcake baking cups, and has ripples. If you are not sure, you can also feel for the Batarang. It is a small bar-like piece with little wings at both ends. 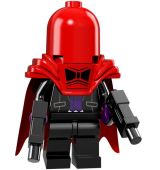 ➡ LEGO Batman Movie Minifigures Red Hood: The big, oddly shaped dome piece used for the head is what you want to look for. It is very distinct, and can’t really be mistaken for anything else. Another piece you might run across is the gun. If you find that first, look for the dome piece to confirm that you have Red Hood. The shoulder armor is a strange piece and can be mistaken for other accessories. 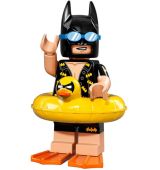 ➡ LEGO Batman Movie Minifigures Vacation Batman: The inner tube is rather large and round, so you should be able to find it easily. To make sure it is the inner tube and not the plate of Lobster Lovin’ Batman, go around the rim to find the ducky’s head. The flippers are other pieces that you might want to feel for, but they could be mistaken for Catman’s claws. 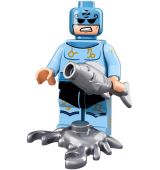 ➡ LEGO Batman Movie Minifigures Zodiac Master: The best accessory to look for is the fish, as it has a very distinct shape that you are probably already familiar with. The crab is a larger piece, but it can easily get confused with Lobster-Lovin’ Batman’s lobster. So best is to just stick with the fish. This minifigure has no other accessories, which means fewer distractions. 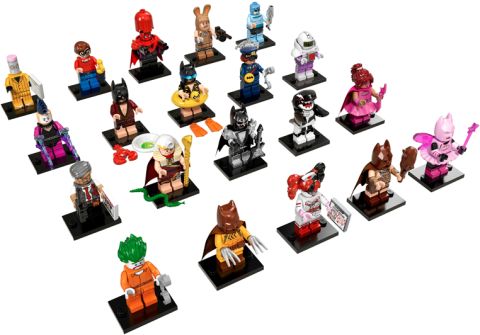 One way to quickly identify the above mentioned parts and accessories is to first shake the baggies so that all small parts fall into one corner. This way you can identify them quickly. It is also a good idea to have a printout of the minifigures with accessories that you can look at as a reference while you are searching for the minifigs you want. You can go through a whole box of Collectible Minifigures quite quickly following these simple methods, and as a bonus you will also improve your tactile skills!

Hope this helps with hunting for The LEGO Batman Movie minifigs! They should be available at all LEGO retailers and are also listed at the Online LEGO Shop. If you have your own tips and tricks on identifying them feel free to share in the comment section below! 😉

Next post: Build your own working LEGO Nerf gun!