Last week LEGO announced an interesting new robotics system called LEGO BOOST. It is aimed at kids as young as 7 years old, who are not quite yet ready for LEGO MINDSTORMS, but would like to get into programming. LEGO BOOST is also cooler looking than LEGO WeDo, the curriculum-based classroom product available to schools. Below is the press-release with detailed information, as well as a video-introductions. 🙂 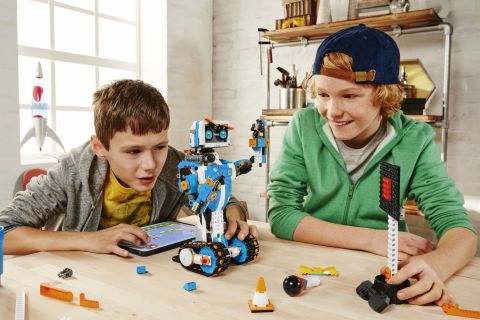 Combine the versatile LEGO building system with advanced technology to boost your creativity with the awesome LEGO BOOST Creative Toolbox.

Download the free tablet app to your device and follow the step-by-step instructions to build and code any of the 5 multifunctional models. Experience Vernie the Robot—a moving and talking robot; the M.T.R.4 (Multi-Tooled Rover 4)—a robust, versatile rover with 4 different tool attachments including a spring-loaded shooter; the Guitar4000—a musical instrument with pitch bend and sound effects; Frankie the Cat—an interactive pet that plays, purrs and expresses its mood; or the AutoBuilder—an automated production line that really builds miniature LEGO models!

Bring your creations to life with the app’s intuitive, icon-based coding interface and complete an array of exciting activities designed for each model. This set also includes a playmat for use with specific activities, and a LEGO BOOST wall poster!

Take your LEGO play to the next level with the amazing LEGO BOOST Creative Toolbox. Build and code interactive, motorized robots, models and creations with distance, color and tilt sensor technologies. 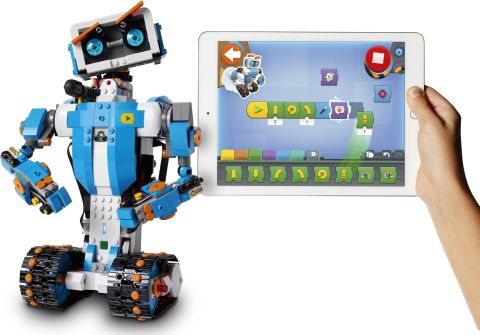 ➡ Build the creation you want – LEGO BOOST combines the endless play opportunities of a traditional LEGO set with an endless variety of movement and sound capabilities made possible through an easy-to-use, app-based coding environment. LEGO BOOST has been developed for children ages 7 and older by an international team of LEGO designers. Using familiar LEGO elements and simple coding language, LEGO BOOST delivers an intuitive approach and opportunities for quick success.

Powered by a Move Hub, a LEGO stud-covered brick with built-in tilt sensor upon which children can add LEGO elements, motors and a sensor that combines color and distance detection, LEGO BOOST brings movement to any LEGO creation. The set includes building instructions for five diverse models; Vernie the Robot, Frankie the Cat, the Guitar 4000, the Multi-Tool Rover 4 (M.T.R.4), and the Autobuilder, each designed to give children the basic building and coding skills needed to express their creativity by personalizing whatever they build.

“We know that children dream of bringing their LEGO creations to life, and our chief ambition for LEGO BOOST is to fulfill that wish. Once children build a LEGO creation, we give them simple coding tools to ‘BOOST’ their models by adding personality,” said Simon Kent, design lead for the LEGO Group. “We want children to first and foremost have a fun and limitless play experience, adding the coding opportunity is the means to get there.” 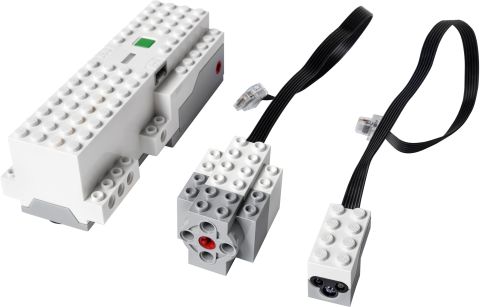 ➡ Coding brings your creation to life – LEGO BOOST introduces children to coding through a free downloadable app that contains the guidance, building instructions and simple coding commands to bring to life five LEGO creations, one at a time. Much like building with LEGO bricks, children build behaviors and actions by linking digital coding blocks in an easy-to-understand horizontal layout. To further personify the experience, LEGO BOOST lets children add voice recordings to their creations, adding personality without requiring spelling and typing. The app also includes more than 60 activities designed to inspire additional building, coding and play. 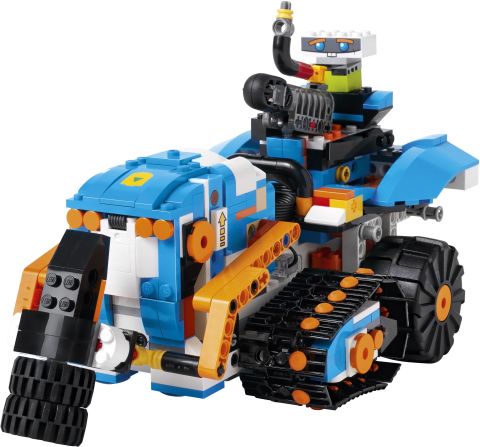 ➡ Creative canvas lets you boost any LEGO creation – To further inspire creative building and coding, the LEGO BOOST app includes a “creative canvas” that includes basic building instructions for three simple base models that children can use to customize their own LEGO creations. The three bases available at launch include: a walking base for making animals like a dragon or a pony, a driving base for building vehicles like a dune buggy or rover, and an entrance base so that children can make their own castle, fort, or even a futuristic space station. Once children are comfortable with building and coding the various LEGO BOOST models, they can use the kit to “boost” any LEGO creation – from LEGO City and LEGO Friends to LEGO Ninjago and The LEGO Batman Movie. 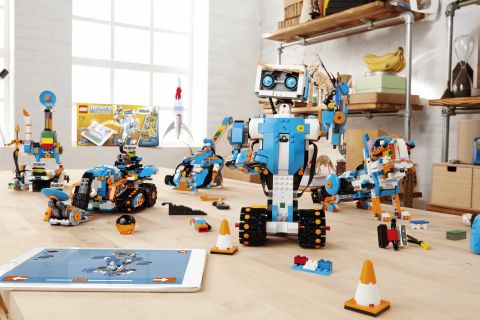 LEGO BOOST will be available at most stores and online shopping sites where toys are sold, through select consumer electronics retailers, and at LEGO Stores and shop.LEGO.com in the second half of 2017 and will have a suggested retail price of $159.99 USD $159.99 (EUR) and $199.99 (CAD). For more information, visit LEGO.com/BOOST.

I find this to be a very interesting development. While LEGO MINDSTORMS is definitely popular and extensively used in school programs and after school activities, the $350 price-tag, the 10+ age-range, and LEGO Technic-based building system didn’t make it accessible to everyone. The LEGO BOOST hardware seems to be more similar to the LEGO WeDo educational kit, and they also both use mostly regular LEGO system bricks instead of just LEGO Technic. So it seems like LEGO BOOST is a simpler, friendlier and cheaper version of LEGO MINDSTORMS, but cooler, fresher and more accessible than LEGO WeDo, which is geared towards schools. I just hope it won’t end up lie LEGO FUSION, which also sounded excellent and had great potential, but ended up being full of problems. 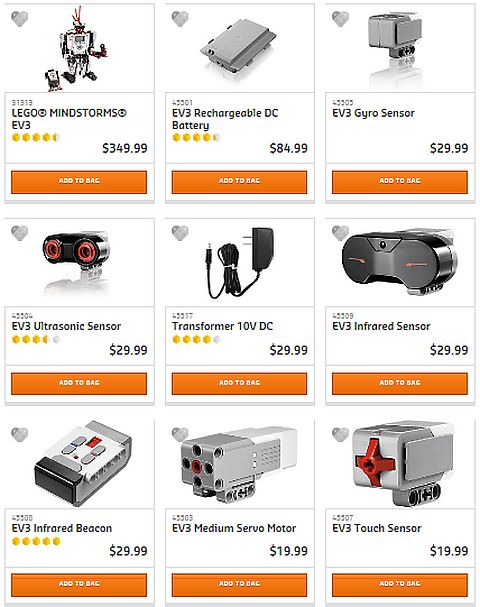 What do you think? How do you like the LEGO BOOST Creative Toolbox so far? Is this something you are interested in? How do you think it compares to other LEGO robotics kits? Feel free to share your thoughts and discuss in the comment section below! 😉