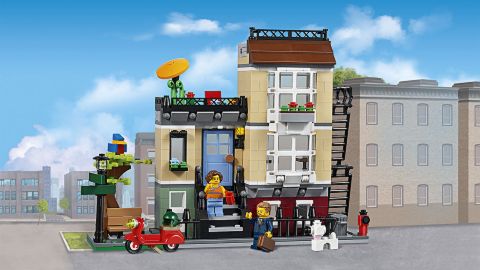 All of these LEGO Creator houses are 3-in-1 sets, meaning that they can be assembled in three different ways. So if you have three of the same set, you can create a really nice and cohesive street scene, as you can see it done with the #31065 LEGO Creator Park Street Townhouse in the picture below by JANGBRiCKS. And of course, the sets in the series can also be mixed and matched for all kinds of configurations to add to a LEGO City layout, or can be used to set up a similar but smaller street as the LEGO Modular Buildings.

In fact, because these smaller LEGO Creator buildings are still considered minifig size and are similar in style and colors as the LEGO Modular Buildings, they can be added to the same street with their big brothers, either as they are or with some modification. The small LEGO Creator buildings open up like a doll-house instead of the stacked design of the Modulars, but this is simple to rectify. They can also be made taller, to match the roofline of the larger buildings. In the picture below you can see the #31026 LEGO Creator Bike Shop & Café next to the #10243 LEGO Creator Parisian Restaurant, so you get an idea of the scale. 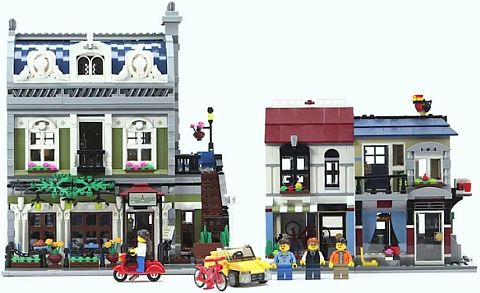 The #31026 LEGO Creator Bike Shop & Café was received enthusiastically by LEGO fans due to its nice design and sweet colors. It contained 1023 pieces with the original price of $90. The following years LEGO cut the piece-count and price by half, creating less substantial, but still excellent looking buildings. The #31036 LEGO Creator Toy & Grocery Shop is 466 pieces with a price of $40, and the #31050 LEGO Creator Corner Deli is 467 pieces with a price of $40. I believe that LEGO might have felt that the first building in the series was too close in piece-count and price to the LEGO Modular Buildings, and releasing smaller sets made more sense to appeal to a different customer base. 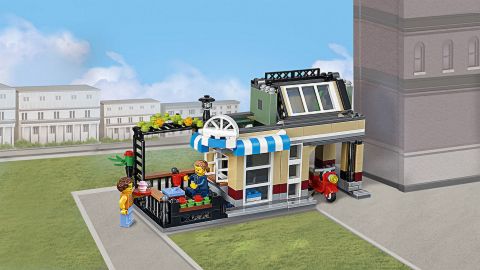 For 2017 we get the LEGO Creator Park Street Townhouse, which is 100 pieces more than the sets in the last couple of years, and $10 more expensive. I’m sure LEGO will eventually find the right contrast between these smaller sets, and their big brothers, while also keeping them compatible. Below is the official description. 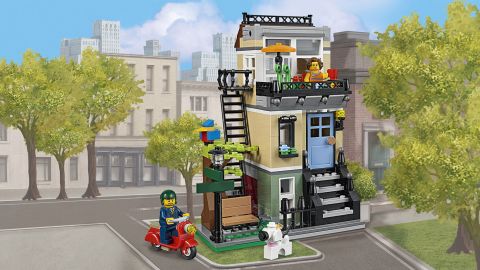 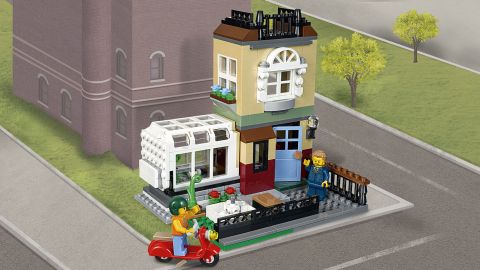 As you can see, this set has a really nice color-scheme with sweet details both on the inside and the outside. It is also interesting to see how the same pieces are reused in the alternate models. Also, I haven’t mentioned this, but the dollhouse style opening of these buildings give them another look, so they are technically 6-in-1 buildings. In the video-player below I have included JANGBRiCKS review of this set, so you can see it better. And I have also added reviews of the previous three sets for your convenience.

In summary, these smaller LEGO Creator buildings are an excellent option if you don’t have the display-space or the fund to get the larger LEGO Modular Buildings. And the sets can also be used to add additional buildings to the Modulars. Plus, they each have three alternate buildings in two different layouts, so they are extremely versatile. You can get all of them, or multiples of one of them, or just one, and you will have plenty of fun. The #31050 LEGO Creator Corner Deli and the #31065 LEGO Creator Park Street Townhouse are both available under the LEGO Creator section of the Online LEGO Shop. 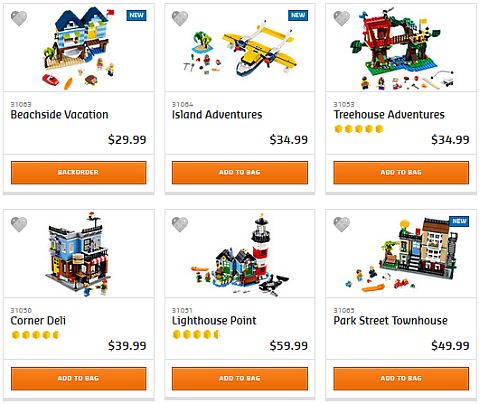 Next post: LEGO BOOST – a new type of LEGO robotics