If you would like a little something different in your LEGO collection, or you are looking for a gift for a LEGO fan who already has it all (is that even possible?), it’s worth checking out some of the novelty items related to the hobby. This includes such items as T-shirts, mugs, notebooks, pens, keychains, watches, plushies, costumes, and more. While these products carry the LEGO logo, most of them are not made directly by LEGO, but by other companies under license from the LEGO Group. We have talked about a number of these items previously (see links at the end of this post), and today we will focus on LEGO timepieces made by ClicTime – manufacturer and licensee of LEGO watches and clocks. 🙂 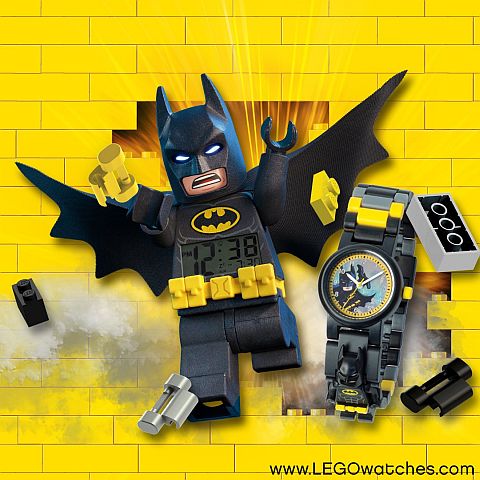 ClicTime is a company based in the UK and they have been around since 1999. Their products are a mixture of their own brands and licensed products. They are the licensee for Star Wars watches and clocks and are an exclusive global licensee for LEGO watches and clocks (they have been working together with LEGO for 12 years now). You have probably seen their products at stores like Toys’R’Us, Target, Wal-Mart, JCPenney, and online stores like Amazon.com. And of course their products are also available at official LEGO stores, and the Online LEGO Shop. 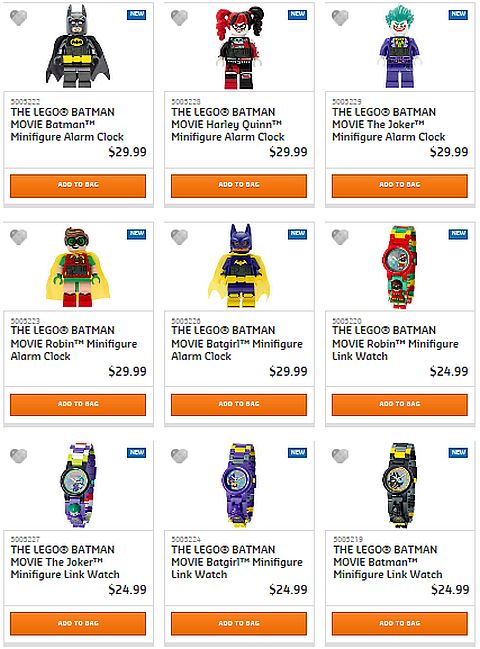 ClicTime makes high quality LEGO timepieces for both kids and adults. Some of them come with classic LEGO colors and minifig designs, while others are themed watches and clocks related to popular themes like LEGO Star Wars, LEGO Super Heroes, LEGO Ninjago, LEGO Friends, The LEGO Movie – and most recently – The LEGO Batman Movie. 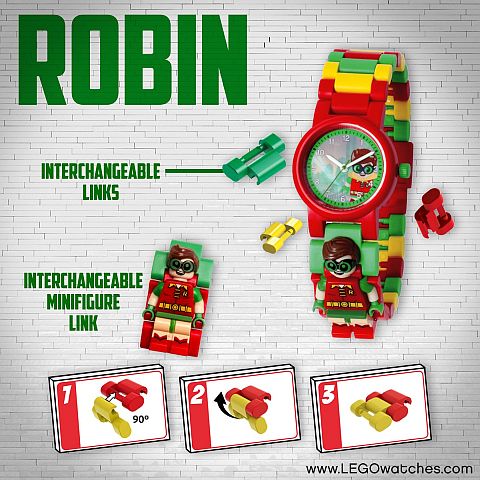 The LEGO wristwatches for kids (and playful adults) include multicolored interchangeable links, so you can easily create your own strap design, and add/remove links for a perfect fit. They also include a very cute sculpted, non-posable minifigure (about 2/3rd the size of a regular minifig), which you can incorporate into the wrist-strap. The watches are analog, with quartz movement, scratch-resistant lens, and hour, minute and second hands. And they are water resistant up to 164′ (50m). Under The LEGO Batman Movie license they have watches with Batman, Robin, The Joker, and Batgirl. They (along with some of the previous releases) are available at the Apparel & Accessories section of the Online LEGO Shop, and you can find them on Amazon as well. 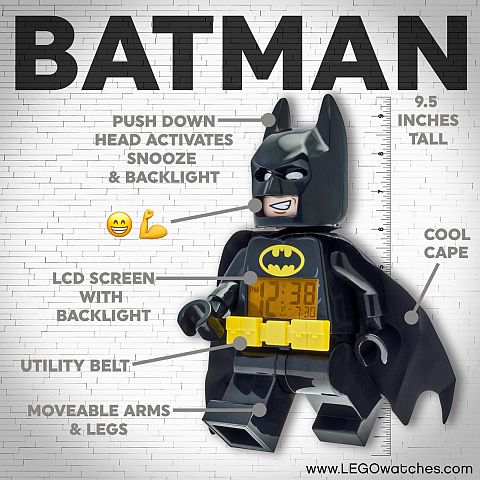 While I like the watches, my most favorite items by ClicTime are the LEGO minifigure clocks. They are basically giant minifigures (over 9” or 22cm tall), with the same articulation as regular minifigs (head, arms, hands and legs all rotate). They even have capes for characters like Batman, Robin and Batgirl. You can use these clocks as supersized heroes and villains in your LEGO adventures. Isn’t that fun? 😀 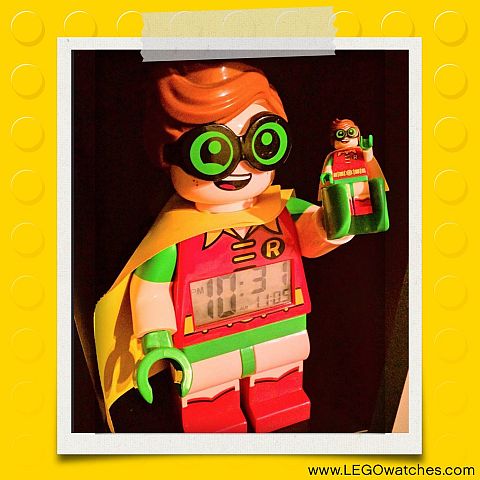 Oh, yes, and these giant figures also work as regular alarm clocks. The digital clock is integrated into the chest, with controls at the back of the figures. You can press down the head to activate the snooze and backlight functions. I like the attention to detail. For example, Batman has a yellow backlight, while Nya (the water ninja) comes with blue light, and Kai (the fire ninja) with red light. I should also mention that the quality of these clocks is just what you would expect from anything under the LEGO brand; they are excellent with shiny plastic, beautiful printing, and well-fitting joints. 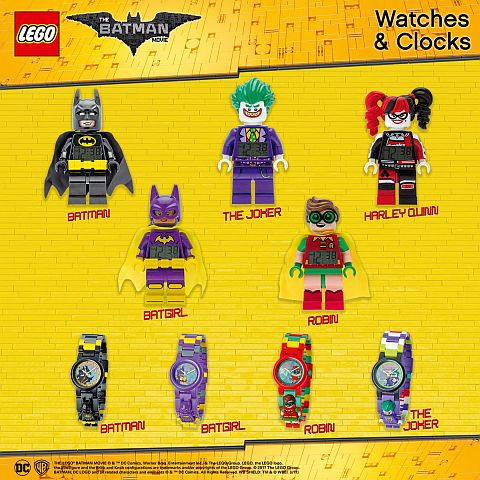 Under The LEGO Batman Movie collection the alarm clocks include five characters; Batman, Robin, Batgirl, Harley Quinn and The Joker. These are also available at the Apparel & Accessories section of the Online LEGO Shop, as well as on Amazon. 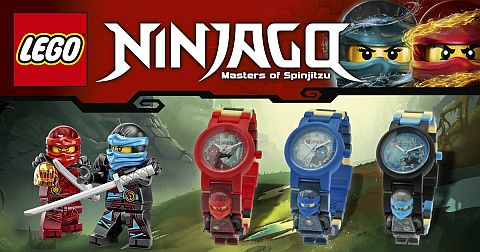 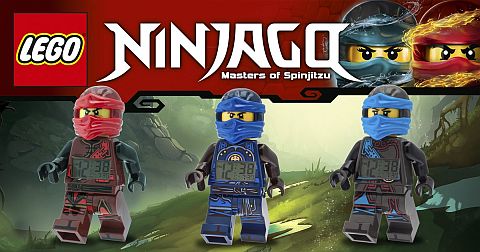 The LEGO Ninjago Hands of Time collection will include Jay, Kai and Nya in both watch and clock form, but unfortunately only Nya is going to be available in the US, starting in May of this year (Jay and Kai will be sold in the UK). However, more LEGO Ninjago characters from previous seasons of the TV show are available in the US as well. There is also going to be a range of products related to The Ninjago Movie coming later this year, but there is no detailed information about them yet. 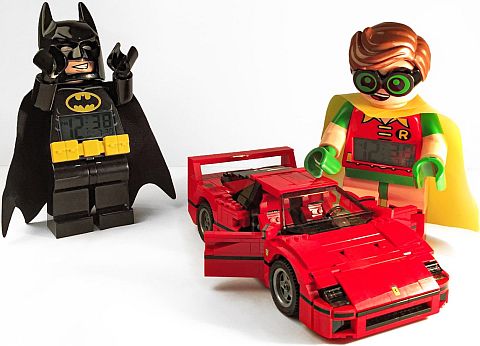 What do you think? How do you like the LEGO watches and clocks? Do you have any of them already? Which one do you like the most? And what other characters would you like to see in the future? Feel free to share your thoughts and own review in the comment section below! 😉