Cars are back! To correspond with the upcoming Cars 3 film that is scheduled for release in mid-June of this year, LEGO recently added a series of LEGO Cars 3 sets to the LEGO Juniors and LEGO DUPLO lines. In addition, LEGO is also running a contest for teen and adult LEGO fans at their ReBrick website. So let’s talk about all of this. 🙂 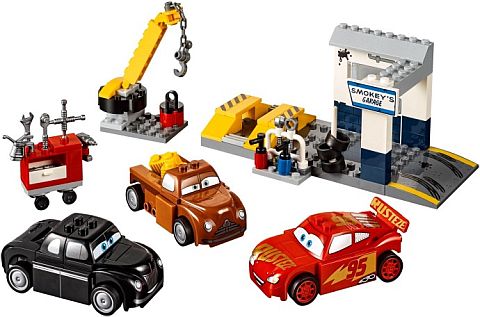 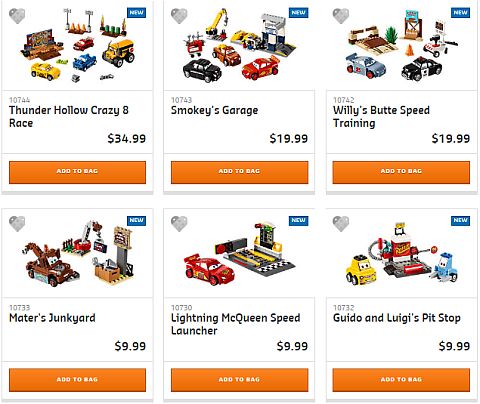 As you can see, three of the sets come with one car, two sets include two cars each, and the two largest sets have three and four cars. That’s a lot of very fun little vehicles. I particularly like Smokey’s garage, with two excellent looking classic cars, and of course Mater, Guido and Luigi are fan-favorites. And just look at all those gorgeous printed pieces! It’s worth getting the sets just for those! And the prices are not bad at all.

➡ LEGO DUPLO CARS 3 SETS: Just like with the previous two Cars movies, there are Cars 3 sets under the LEGO DUPLO line as well. Although they are meant for children ages 2-5, the sets are so cute, I won’t be surprised if older kids and adult collectors also get them. Amongst the earlier sets my favorites were the #5829 LEGO DUPLO Pit Stop with the adorable hippy bus Fillmore from 2011, and the #6132 LEGO DUPLO Cars set with Red from 2012. In the 2017 collection, there are three sets: #10846 LEGO DUPLO Flo’s Cafe, #10856 LEGO DUPLO Mater’s Shed, and #10857 LEGO DUPLO Piston Cup Race. The chubby size and rounder shapes of LEGO DUPLO are a perfect match for Cars, and as on all LEGO DUPLO sets, the decorated pieces are printed. See the LEGO DUPLO section of the Online LEGO Shop.

➡ LEGO CARS 3 CONTEST: While the LEGO Cars 3 sets mainly target children, the LEGO Cars Brick Posters Contest is for teen and adult LEGO fans (you have to be at least 13 to participate). The challenge is to create a your own LEGO brick-built movie poster for the Cars 3 film. You can create a brick-built version of an existing poster, or set up a scene showing what you think would make a great poster for the next installment of Lightning McQueen’s story. The deadline to enter is June 1st, 2017 at 10:00 AM EST. 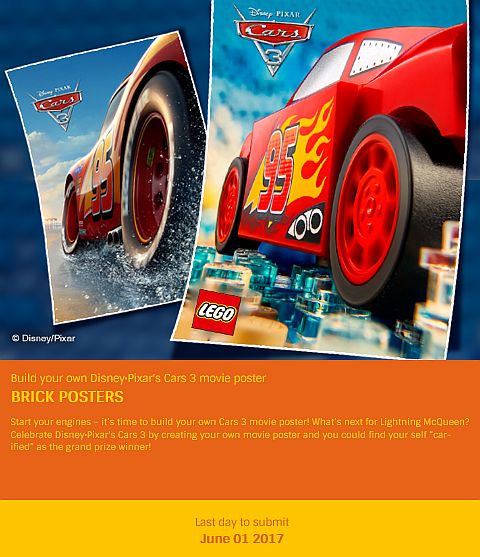 A panel of judges from the LEGO Juniors team and Pixar Animation Studios will select one grand prize winner and two runner-up winners. The grand prize winner will receive a $200 shopping spree at the Online LEGO Shop, a unique Car-ified artwork of the winner made by a Disney artist in a LEGO-made frame, a one-of-a-kind LEGO mosaic of the Car-ified artwork, a Disney-Pixar Cars 3 movie poster signed by the filmmakers, and all eight of the new LEGO Juniors Cars 3 sets we talked about above. The two runner-ups will receive the same prizes, except for the personalized artwork and mosaic. You can read other details on the contest here: LEGO CARS 3 CONTEST AT REBRICK 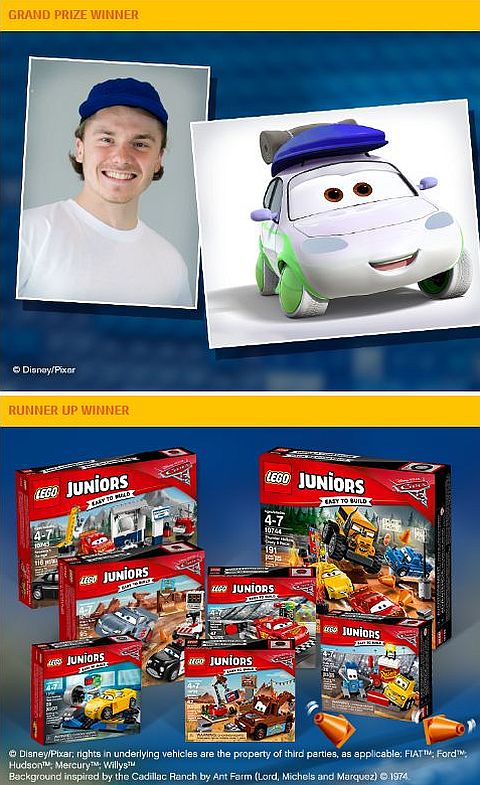 While LEGO usually only release a couple of sets related to animated Disney films, they have been investing a lot more into the Cars franchise. Cars really is a good fit for LEGO due to the similar design style, colors, the popularity of the films, and because kids just love to play with cars. What do you think? How do you like the new LEGO Cars 3 sets? Are you planning to get any of them? And are you going to enter the contest? Feel free to share your thoughts in the comment section below! 😉