Amongst all LEGO Creator Modular Buildings, the #10232 LEGO Creator Palace Cinema is the only one that includes stickers (in the other sets in the series the decorated pieces are all printed). LEGO most likely made the decision to use stickers because the decorations depict large movie posters and signs and would be expensive to print.

The sticker-sheet that comes with the LEGO Creator Palace Cinema includes ten stickers. Three full-color movie posters (two of each) that go on the front of the building, three black and white signs that go over the entrance, and a large black-and-white movie screen. 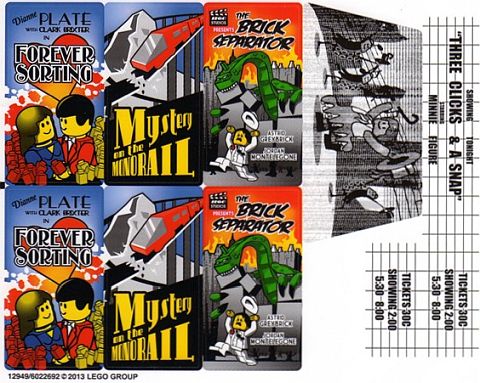 According to the stickers, the movie playing in the theatre is titled “Three Clicks & A Snap”, and tickets are 30 cents (I wish that would be true in real life!). The color stickers representing movie posters feature three fictional movies: “Forever Sorting”, “Mystery on the Monorail”, and “The Brick Separator” – all humorous references to LEGO fan culture.

The movie poster stickers attach to both sides of 4×6 stud clear LEGO windowpanes, so they can be viewed both from inside the lobby and from outside. They are colorful with very nice designs, and thus quite effective. 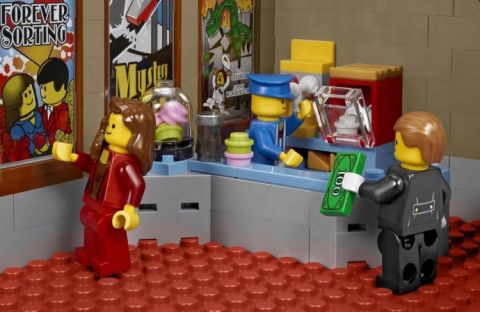 Because the windowpanes snap into regular 4×6 stud window-frames, they can be taken out and rearranged any way you like without having to take apart the building. And the fact that the windowpanes can be snapped in and out easily, also means that you could use other stickers to represent movie posters, as long as you have a few extra 4×6 windowpanes to stick them to. 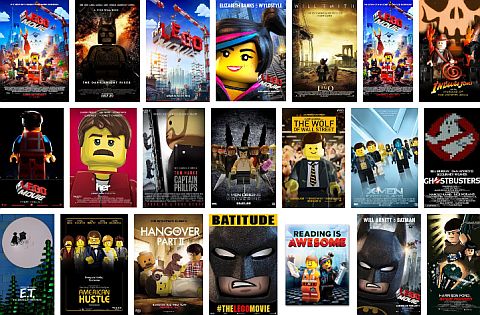 If you have a good quality printer and some sticker-paper, you can make your own posters, and keep your Palace Cinema up to date with current movies. You can pretty much shrink down any real-life movie poster and print them out on either clear or white sticker-paper. However, the ones that fit with the theatre the best are the posters that are already LEGO-ized. Either LEGO themselves or LEGO fans make LEGO versions of movie posters, so you can just search at Google images for LEGO Star Wars movie poster, LEGO Guardians of the Galaxy Movie poster, LEGO Batman Movie poster, or whatever else you like. 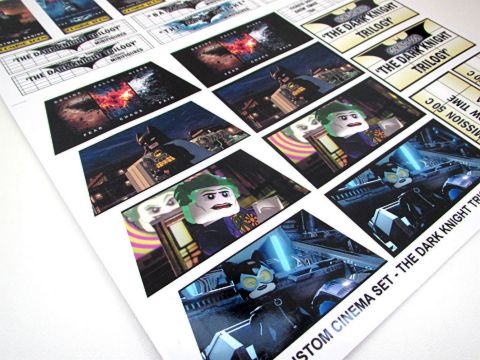 If you don’t have a good quality printer, or just don’t want to fiddle with designing stickers, you can also purchase custom stickers specifically made for the LEGO Creator Palace Cinema from various eBay sellers. They even include updated movie-screens and signs for the front of the cinema, so you can swap out those as well. Here are some of the current results: LEGO PALACE CINEMA STICKERS ON EBAY

Having some extra windowpanes with movie poster stickers is a fun way to keep your LEGO Creator Palace Cinema fresh and up to date. People are always amazed when they see the Palace Cinema featuring LEGO-ized stickers of current movies! They can’t imagine how that’s possible!

What do you think? Do you have the LEGO Creator Palace Cinema? Are you keeping the original stickers, or do you swap them out occasionally? Do you make you make your own stickers, or purchase them from other LEGO fans? Feel free to share in the comment section below! 😉

Next post: 365 Things to Do with LEGO Bricks book