There are only two LEGO Super Heroes sets this summer, both from the Marvel Comics universe, and related to the upcoming Spider-Man: Homecoming film. We will look at both sets in detail below. 🙂 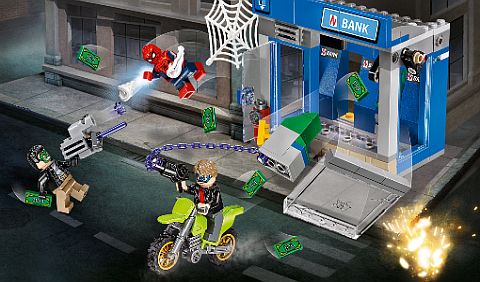 ➡ #76082 LEGO SUPER HEROES ATM HEIST BATTLE: This is a small set with a minimalist bank kiosk, and three minifigures. As you will see in the video-review below by JANGBRiCKS, the bank itself is not particularly well designed and the play-features don’t work that well either. The three minifigures however are excellent, with very detailed printing all over their bodies, and great looking masks. 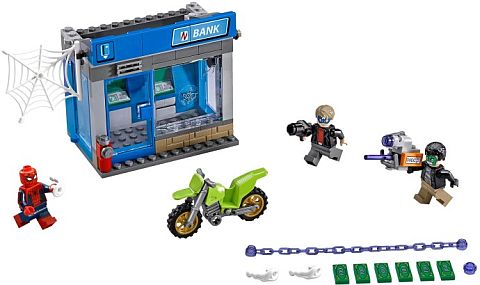 Here is the official description of the set: Help Spider-Man to stop the masked robbers burglarizing the bank in this action-packed LEGO Marvel Super Heroes set. The bank opens out for easy play and features an exploding window function, a removable ATM, and an ATM with an explode function to send LEGO cash elements flying everywhere. The two robbers are equipped with a stud-shooting ATM Buster and a gun with hybrid-tech chain to drag the removable ATM away, plus a getaway bike. Attach and fire Spider-Man’s Power Blast weapons to take down the villains. Includes 3 minifigures: Spider-Man and 2 masked robbers. 185 pieces. Price: $19.99 – BUY HERE 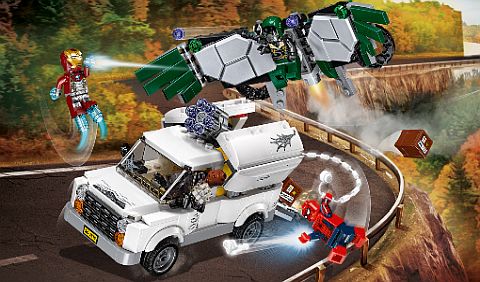 ➡ #76083 LEGO SUPER HEROES BEWARE THE VULTURE: This set is twice as large both in piece-count and price, and is definitely more substantial and better designed. I really like the look and features of the van; sort of a combination between a van and a space shuttle. I could see having quite a bit of fun with it even outside of the Spider-Man story. The set comes with four excellent minifigures that you can see in the video-review below.

Here is the official description of the set: Team up with Spider-Man and Iron Man to catch up with The Shocker’s Van and tackle the Vulture’s attacks in this thrilling LEGO Marvel Super Heroes set. The Shocker’s Van opens up for easy play and includes a mounted, adjustable 6-stud rapid shooter, a buildable rifle and buildable tech egg, while Vulture’s wings have 2 detachable stud shooters. Includes 4 minifigures: Spider-Man, Vulture, Iron Man and The Shocker. 375 pieces. Price: $39.99 – BUY HERE

LEGO Super Heroes Spider-Man sets are pretty rare, so it’s nice to have two new sets at the same time. They are small, and don’t really offer much as far as displayability, but they do have some play-value, and LEGO went all out with the minifigures. I would say the bank is not really worth it for the set itself, but it is the cheapest way to get the new Spider-Man design. The larger set has better play-value and design, and you also get four excellent minifigs, including Spider-Man, and a unique Iron Man armor. Comparing the two sets, I would say that the second one is an overall better value, but of course you are free to pick your favorite. Both sets are available at the LEGO Marvel Super Heroes section of the Online LEGO Shop. 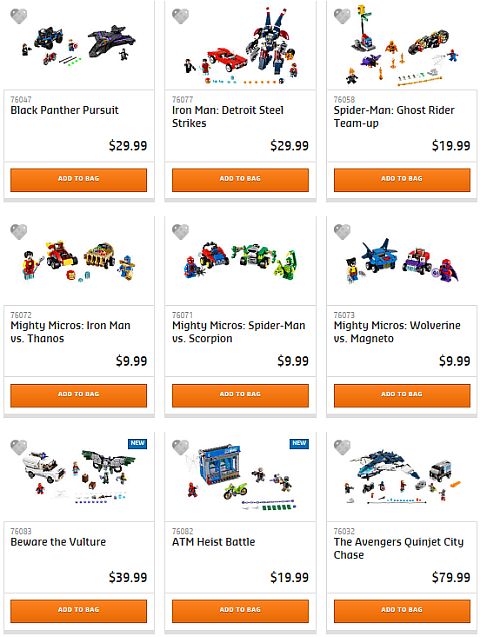 What do you think? How do you like these two new LEGO Spider-Man: Homecoming sets? Are you looking forward to the movie? Feel free to share your thoughts and discuss in the comment section below! 😉