The new wave of LEGO Super Heroes sets that was released at the beginning of the month is quite small, so I thought we will take a look at both the LEGO DC Comics Super Heroes (three new sets), and the LEGO Marvel Super Heroes (two new sets) at the same time. While this is a small assortment, there are some interesting details and minifigures worth checking out. So let’s take a closer look at each of the five new sets. 🙂 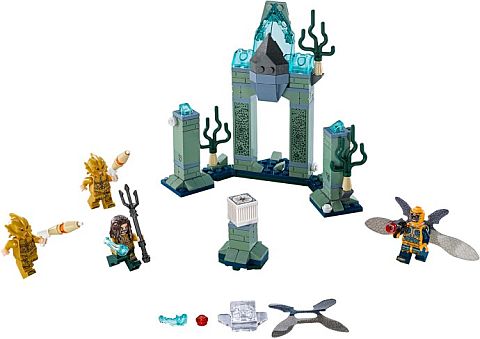 ➡ #76085 LEGO SUPER HEROES BATTLE OF ATLANTIS: Like in many of the smaller LEGO Super Heroes sets, it is very obvious here that the main focus is the minifigures; Aquaman, a couple of Atlantean guards and a Parademon. LEGO graphic designers went all out on all four of the minifigs, with finely printed, delicate designs. While there is not much more besides the minifigs, I appreciate the fact that LEGO used sand-green for the small structure, which makes it a lot more desirable. Overall, a nice little set if you are into Aquaman, golden minifigs, and sand-green pieces. Here is the official description: Team up with Aquaman and the Atlantean guards to stop the super-jumping Parademon stealing the Mother Box in this all-action LEGO DC Comics Super Heroes Battle of Atlantis set. The underwater Atlantis scene features a grand arch to knock over with the Parademon’s Super Jumper. Also includes the Mother Box and four minifigures with assorted weapons: Aquaman (with new-for-August-2017 scale armor decoration), a Parademon, and two Atlantean guards. 197 pieces. Price: $19.99 – BUY HERE 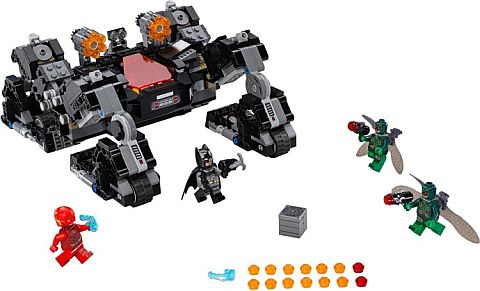 ➡ #76086 LEGO SUPER HEROES KNIGHTCRAWLER TUNNEL ATTACK: Batman vehicles are always fun, and the all-terrain Knightcrawler is an excellent example of interesting building techniques, great play-features, and lots of options for convertibility. Nice minifigs too, especially The Flash, who only appeared in a couple of other sets previously. Here is the official description: Drive and crawl with Batman’s all-terrain vehicle and reclaim the Mother Box from the evil Parademons, in this exciting LEGO DC Comics Super Heroes Knightcrawler Tunnel Attack set. The Knightcrawler features 4 posable limbs, each with 2-wheel tracks, plus dual 6-stud rapid shooters and an opening cockpit for Batman. Includes four minifigures with weapons: Batman, The Flash, and two Parademons. 622 pieces. Price: $49.99 – BUY HERE 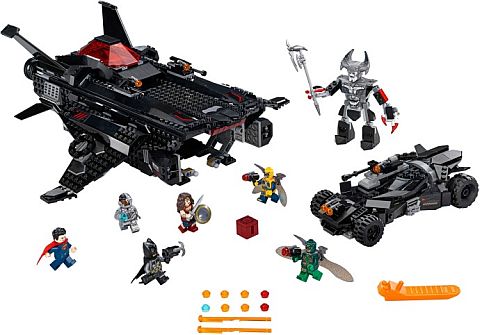 ➡ #76087 LEGO SUPER HEROES FLYING FOX: BATMOBILE AIRLIFT ATTACK: Yet another really fun Batman vehicle, or more accurately, two vehicles! The Flying Fox is a very sturdy carrier for a great little Batmobile. Make sure you watch the video-review below to see how it all works. There is also a nice selection of minifigures, plus a large, brick-built figure that also looks excellent. Here is the official description: Team up with the Justice League against Steppenwolf and the Parademons to claim the precious Mother Box, in this exciting LEGO DC Comics Super Heroes Flying Fox: Batmobile Airlift Attack set. The Flying Fox features a 2-minifigure cockpit with a lift-off canopy, 2 spring-loaded shooters, 2 stud shooters and space inside for the Batmobile with an opening cockpit, 3 stud shooters and adjustable wings. Includes six minifigures with weapons: Cyborg, Batman, Wonder Woman, Superman, and two Parademons, plus a Steppenwolf big figure. 955 pieces. Price: $129.99 – BUY HERE

➡ #76084 LEGO SUPER HEROES THE ULTIMATE BATTLE FOR ASGARD: While this set is only 400 pieces, it manages to include a great little spaceship, a brick-built wolf, and six minifigures! Lots of play-value here, and the minifig all come with brand new prints. Here is the official description: Fly the Commodore spaceship and team up with Thor, Bruce Banner and Valkyrie to take on Hela, her Berserkers and the Fenris wolf in this exciting LEGO Marvel Super Heroes The Ultimate Battle for Asgard set. The Commodore has 2 dual stud shooters and a minifigure-drop function, while the buildable Fenris wolf figure features posable joints for different battle poses. Includes six minifigures with assorted weapons: Thor, Bruce Banner, Valkyrie, Hela, two Berserkers, plus a buildable Fenris wolf figure. 400 pieces. Price: $49.99 – BUY HERE 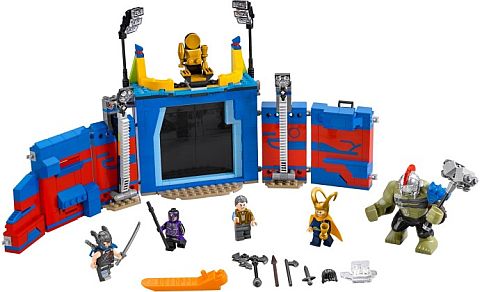 ➡ #76088 LEGO SUPER HEROES THOR VS. HULK: ARENA CRASH: The large Hulk figure is really the highlight of this set, although the other minifigures also look nice. The arena itself doesn’t seem to add a whole lot of play-value however, so it may not be worth picking up this set at full price. Here is the official description: Role-play an arena duel between Thor and Hulk and then team up with these two old friends to topple Grandmaster. This awesome LEGO Marvel Super Heroes Thor vs. Hulk: Arena Clash set features an arena with a sliding gate, secret weapons rack, 2 toppling pillars, smash-function wall and an opening prison cell. Use Thor’s super jumper to knock Grandmaster off his throne and Loki off his seat. Includes four minifigures with assorted weapons and accessories: Thor, Loki, Grandmaster, and a Sakaarian Guard, plus a Hulk big figure. 492 pieces. Price: $59.99 – BUY HERE

LEGO Super Heroes sets are known to be expensive, so it’s best to consider carefully which ones you want to get. If the set has great play-value, a good selection of parts, and collectible characters, it’s usually worth getting them at the regular price. However, if you are only interested in a couple of minifigs, you might consider buying them separately on the secondary market, or wait until the sets go on sale. I have to add here that LEGO graphic designers definitely did a stellar job on all of the minifigures in this wave. Even the supporting characters are fully detailed from head to toe! To help you make a decision about what to get, you can watch the video-reviews of all five sets in the play-list above.

What do you think? How do you like the new LEGO DC Comics Super Heroes and the LEGO Marvel Super Heroes sets? Do you have any favorite sets and/or minifigures in this wave? Have you purchased and built any of the sets already? Feel free to share your thoughts and own review in the comment section below! 😉

Next post: Fun with the LEGO elbow macaroni piece