Yesterday, we reviewed the first three of The LEGO Ninjago Movie sets, and today we will continue with two more sets; the #70609 LEGO Ninjago Movie Manta Ray Bomber, and the #70610 LEGO Ninjago Movie Flying Jelly Sub. I chose to review these two sets together, as they both include vehicles for the Shark Army. I will also include a third set, the #10739 LEGO Juniors Shark Attack. While this set is under the LEGO Juniors line meant for younger children, it is another great vehicle for the Shark Army guys. So let’s take a closer look at each of the sets. 🙂

One thing you will probably notice right away about all three sets is the beautiful sand-blue and yellow color-scheme. This is quite an unusual combination for vehicles, but it certainly makes LEGO fans happy. While kids may not care one way or another, older LEGO fans love sand-blue (and other sand colors) because it is great for building houses and for more subtle decorations and landscaping. 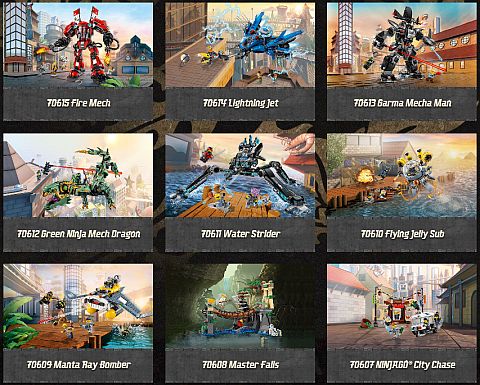 ➡ #70609 LEGO NINJAGO MOVIE MANTA RAY BOMBER: It’s pretty obvious that this vehicle is meant to look like a ray, and it certainly achieves that with the big gaping mouth and overall body shape. The set comes with two numbered bags, and two booklets, splitting the instructions for the bomber in half. As mentioned above, there is a good selection of interesting parts in sand-blue; a couple of very large 6×12 wedge-plates that form the wings, some smaller wedge-plates, 1×4 and 2×2 curved slopes, 1×3 plates, 1×2 and 2×4 tiles, and more. The four minifigures include Cole in a very nice ninja suit, a villager dressed in a traditional robe with a straw hat, carrying a pole with two buckets (very fun constructions!), and a couple of Shark Army guys. 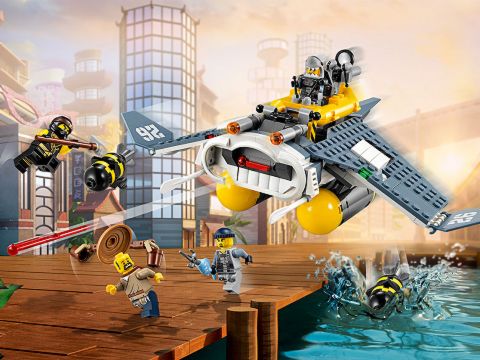 Nice set overall, but I agree with JANGBRiCKS point in the video-review below, that it would have been nice if the bombers were a bit less substantial, and two could have been included in the set (or offer them in cheaper sets). After all, in the movie, hundreds of these are attacking Ninjago City! Here is the official description: Help Cole save Shen-Li in this cool set from The LEGO Ninjago Movie, featuring the Manta Ray Bomber with 2 spring-loaded shooters, 2 bomb elements and a detachable boat. Includes 4 minifigures with assorted weapons and accessories to ramp up the role-play action possibilities: Cole, Shen-Li, Great White and Shark Army Gunner. 341 pieces. Price: $29.99 – BUY HERE 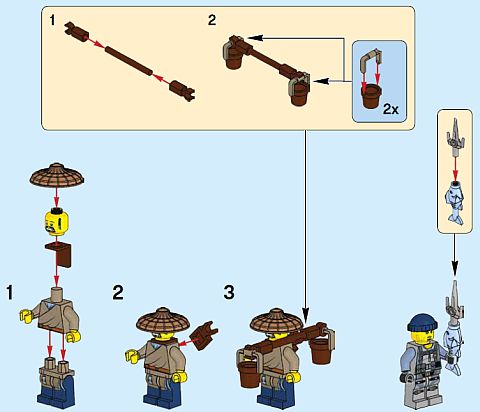 ➡ #70610 LEGO NINJAGO MOVIE FLYING JELLY SUB: While the previous set was shaped like a ray, this one mimics a jellyfish, and you also get a small fishing boat. Here you get three bags and two instruction booklets, and again, you will find some really nice sand-blue pieces; 1×4 and 2×2 curved slopes, and four large curved bricks. The four minifigures include Jay in a nice ninja suit, a villager in traditional robe, and two Shark Army guys with some great headgear. 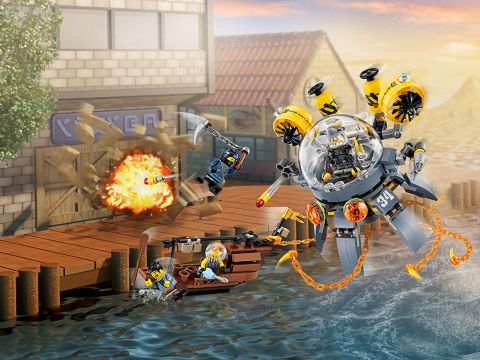 I have to say that I really like this set. The colors, the shaping of the sub and the small boat, as well as the minifig designs and accessories all come together just right. Here is the official description: Join ninja Jay in battle against the shark army and protect Takuma’s boat from Flying Jelly Sub attacks, in this action-packed set from The LEGO Ninjago MOvie. The sub features an opening minifigure cockpit, rotating legs, 2 flick missiles and swinging ‘toxic’ tentacles. Also includes a boat, plus 4 minifigures with assorted weapons to add to the battle role-play options: Jay, Takuma, Jelly and Hammer Head. 341 pieces. Price: $29.99 – BUY HERE 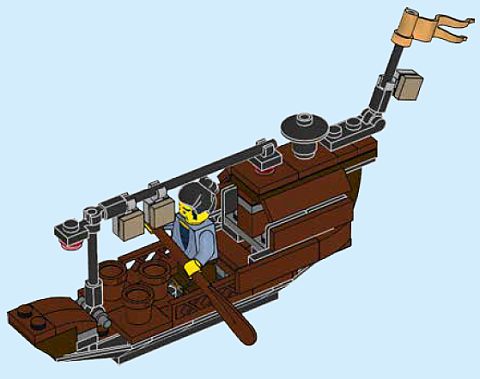 ➡ #10739 LEGO JUNIORS SHARK ATTACK: This set is released under the LEGO Juniors line which is meant for younger children, but it is actually related to The LEGO Ninjago Movie. And, it gives the Shark Army guys another great vehicle. An awesome feature of the LEGO Juniors sets is that all the decorated pieces are printed elements. Here, you get the printed sand-blue piece at the front of the vehicle, the two yellow tiles with black stripes, the really nice printed console slope, and two 1×3 tiles with wood grain pattern. The motorcycle is also printed at the front. There are some other great pieces in this set as well, including the new Japanese style window, and a spiky round piece in reddish-brown. The three minifigs are the same as in The LEGO Ninjago Movie sets, so they would blend in perfectly. 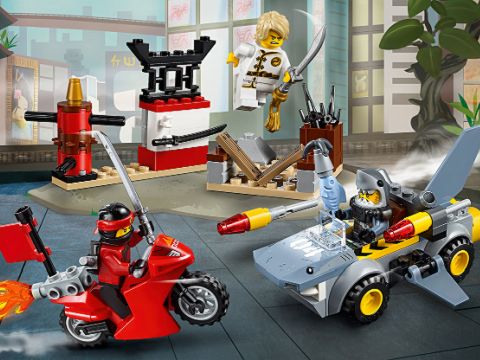 If you really like the Shark Army sets, I think this LEGO Juniors set is a nice addition, and would give your Shark Army another great vehicle. Here is the official description: Team up with Kai and Lloyd for some ninja fun as they battle Great White, featuring a training area with weapon stand, breakable blocks, spinning training dummy, flaming motorcycle and a shark car with flick missiles. This fun set features a simple guide to build and play, and some bigger pieces to help build confidence in younger children. LEGO Juniors is an age-appropriate build and play experience for ages 4-7. Includes 3 minifigures: Kai, Lloyd and Great White. 108 pieces. Price: $19.99 – BUY HERE

While these are not the most talked about sets in The LEGO Ninjago Movie line, there is a lot to like here. The Shark Army is not just a haphazard assortment of badguys, but a well-though out collection with a great color-scheme, awesome vehicles, and nice minifigures and accessories. The prices of the three sets are very reasonable as well, so it shouldn’t break the bank even if you want to get all of them. You can find all The LEGO Ninjago Movie sets under The LEGO Ninjago Movie section of the Online LEGO Shop.