What could this mystery LEGO box be?

A couple of days ago, LEGO tweeted an image of a mysterious box with the caption, “The London Bus comes in a box that is over 20,000 cm³ but something BIGGER is coming… 4.86 times bigger, to be exact!” As you can imagine, the online LEGO community has been abuzz ever since, with speculations about what the set can be. So, let’s talk about this. 🙂 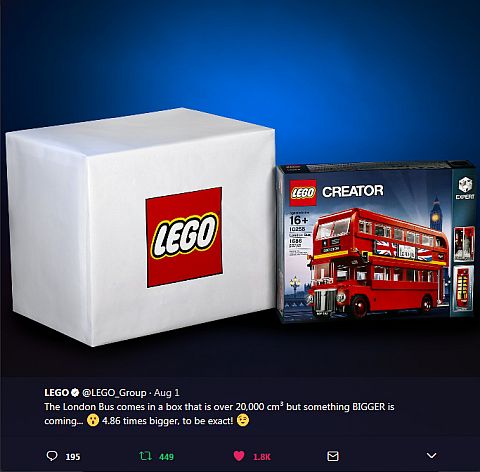 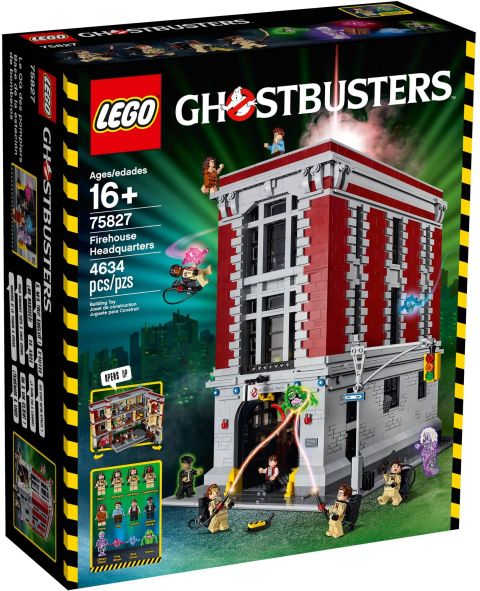 Of course, the main question is, what’s in the box? There are a number of reasonable suggestions by LEGO fans, like a very large LEGO Technic set to commemorate the 40th anniversary of the theme, or a sizable LEGO Creator set (new LEGO Modular Building, new LEGO Winter Village set, or replica of a historical/real life building, etc.). Some people are also hoping for a LEGO Lord of the Rings Minas Tirith, or a new LEGO Harry Potter Hogwarts Castle, or even just a generic LEGO Castle. All of these are still possibilities, however, there is one candidate that seems to have the most credibility and consistent rumors around it… 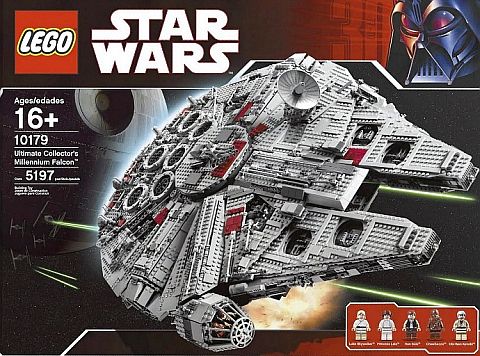 Rumors have been circulating since as far back as 2014 of a new and updated LEGO Star Wars Ultimate Collector Series Millennium Falcon. The highly coveted #10179 LEGO Ultimate Collector Series Millennium Falcon (pictured above) was released ten years ago to commemorate the 30th anniversary of LEGO Star Wars. The set was 5,197 pieces, with an original price of $499.99. It is one of the largest LEGO Star Wars sets ever released, and one of the largest LEGO sets up to date. Since it was retired, it has been selling on the secondary market for around $3,000. 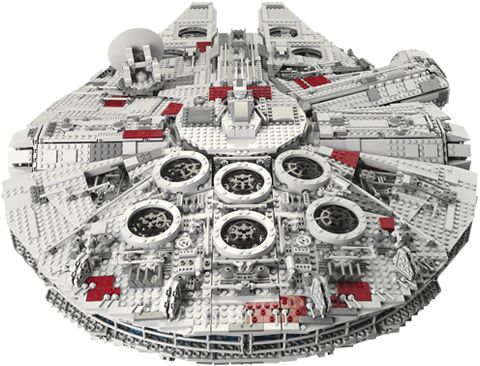 Comparing box sizes again, the #10179 LEGO Star Wars Millennium Falcon came in a 64x48x20 cm box, which adds up to 61,440 cm³. If you are familiar with that set and know how massive it is, seeing that the mystery set is even larger is hard to comprehend. However, it does make sense to release a very large set for the 40th anniversary of LEGO Star Wars, and fans have been asking for a remake of the LEGO Star Wars UCS Millennium Falcon, so it’s quite possible. 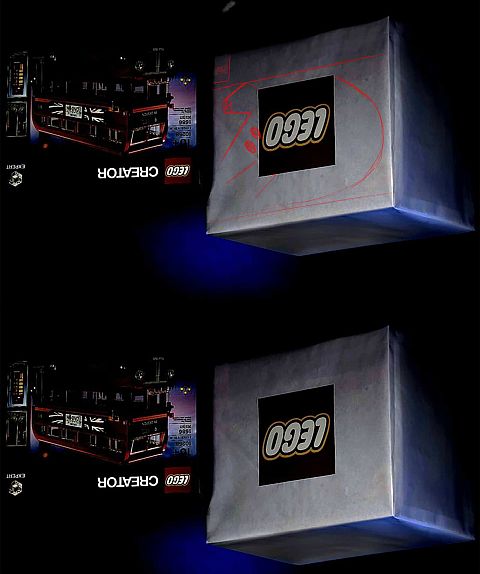 LEGO fans who are savvy with Photoshop have been playing around with the image of the white box to see if they can find any clues. It turns out that the white cover is indeed over a regular LEGO box, and you can make out some of the graphics underneath. And, it appears that turning the box upside down, and adjusting colors and saturation, reveals the LEGO logo, as well as what looks like the outline of the Millennium Falcon’s cockpit and some other bits. Pretty smart, isn’t it? 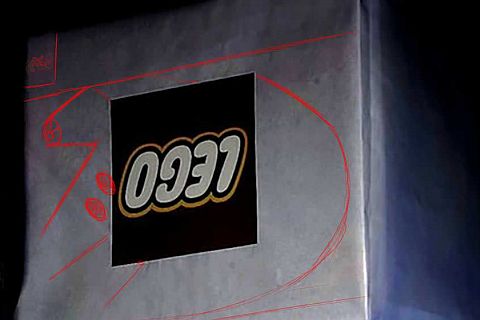 On the other hand, it is surprising that the normally very prominent Star Wars logo and Disney logo don’t show up on the box, even on enhanced images. Plus, when you look at manipulated images like this long enough, you can pretty much start to see anything in the strange shapes and shadows (see the large version of the image here, if you want to do some box gazing). However, most LEGO fans seem to be coming to the conclusion that this must be the new LEGO Star Wars Ultimate Collector Series Millennium Falcon, or at least there is a great hope. There is even a set number in the Brickset database that seems to fit this theory. #75192 has been allocated to a LEGO Star Wars Ultimate Collector Series set for quite some time now, but there have been no updates on what it might be. 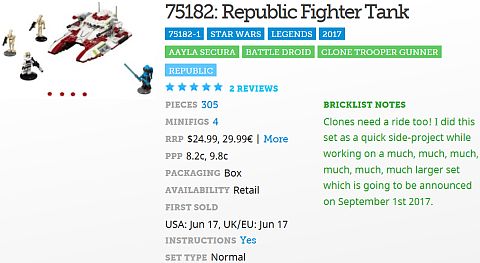 Putting all of this together, it does seem plausible that the mystery box is that of the #75192 LEGO Star Wars Ultimate Collector Series Millennium Falcon, although we will have to wait for further confirmation from LEGO (or leakers) to be sure. If this is indeed the Falcon, it will be revealed on September 1st (also known as Star Wars Force Friday – another clue), and released on October 1st, with early access to LEGO VIP members on September 14th (along with another mystery set that hasn’t been announced yet – source, September LEGO Store Calendar). And LEGO may also continue teasing fans with further clues before the official press-release.

Whatever the set may be, we know for sure that the box is going to be big, which of course also means lots of pieces. While there have been no clues about the actual piece-count, rumors put it at around 7,500 pieces – indicating, again, that the set is massive. If the set turns out to be the Falcon, LEGO Star Wars fans are hoping for a more detailed interior than the previous release, using greebling techniques with small pieces to mimic the mechanics of the ship, along with lots of fun nooks, corners, and hiding places. The price of the set is not known either, but various sources put it at around $800, which would make this the largest and most expensive LEGO set of all time.

What do you think of all of this? What’s in the box in your opinion? Is it the Falcon, or something else? Feel free to share your thoughts and discuss in the comment section below! 😉