by Thita (admin) on September 13, 2017
in LEGO Modular Buildings

The #10232 LEGO Creator Palace Cinema, the 8th in the LEGO Modular Buildings line, has been around since 2013, and it looks like LEGO felt it was time for it to retire. If you haven’t gotten the set yet, but would like to add it to your collection, I highly recommend you get it right away, as it will be retiring soon. Below is the message LEGO recently shared on their Facebook page, as well as a bit more info about the set. 🙂

Here is the post from LEGO’s FB page: “Don’t miss the last screening at the Palace Cinema before the lights go down for the last time. This icon of any modular street corner will be retired soon; so get your tickets for cinema classics like Forever Sorting and The Brick Separator now.” 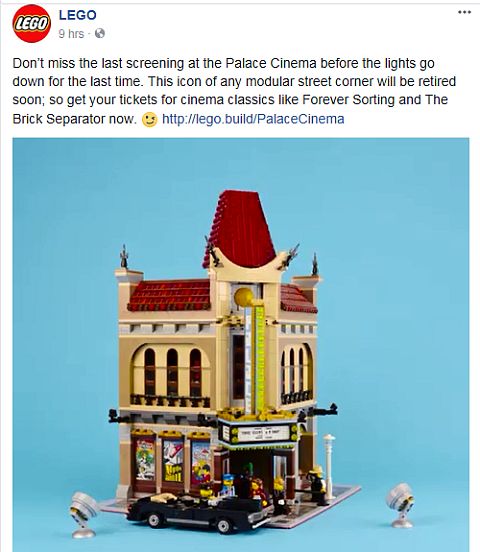 LEGO traditionally retires the oldest LEGO Modular Building amongst the currently available sets right around August/September, before a new model gets added to the collection at the beginning of the following year. Retiring a set means that LEGO is not making any more, and whatever stock is left will be sold until all the sets are gone. In the case of most of the previous LEGO Modular Buildings, the remaining sets sold out so fast that it caught people by surprise and they had to turn to the secondary market to purchase them for much higher prices. The currently available LEGO Modular Buildings are as follows: 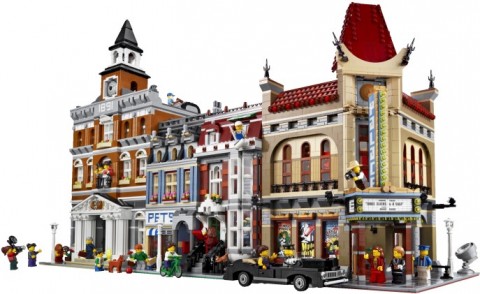 Going back to the #10232 LEGO Creator Palace Cinema, it is somewhere in the middle between the earliest LEGO Modular Buildings, with detailed exteriors, sparse interiors, and taller overall size, and the recent Modulars that are shorter, but are much more detailed on the inside and outside. The Palace Cinema looks great on the outside with colorful (and interchangeable!) posters and other details, but the inside could use a bit of extra decor. And, it is the only LEGO Modular Building with stickers (movie posters, signs, movie screen). It is also one of only three corner buildings, which makes it very useful to turn at the corner, or finish off a street. As you can see, there are some plusses and minuses to this set, but overall it is a well-liked Modular. Below, I have included the official description as well as a video-review, so you can see all the details. And if you want to purchase it, it’s available at the LEGO Creator section of the Online LEGO Shop. 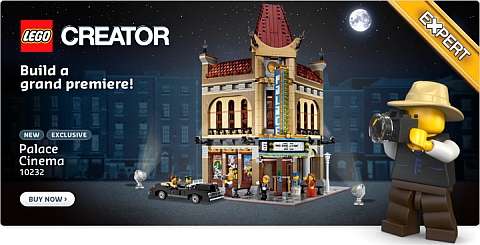 What do you think? How do you like the LEGO Creator Palace Cinema? Do you have it already? Or are you planning to get it before it is retired and sold out? Which one is your favorite LEGO Modular Building so far? Feel free to share your thoughts and own review in the comment section below! 😉