Comparing the performance of LEGO movies

LEGO fan and Reddit member us3rn9m3 put together a very interesting chart, comparing the performance of the three LEGO movies released so far; The LEGO Movie from 2014, The LEGO Batman Movie, and The LEGO Ninjago Movie (both from this year). The chart compares the worldwide weekend earnings of the three movies for the first eight weeks in theatres, pulling data from BoxOfficeMojo.com. The chart also includes the production budget for the three movies. See below… 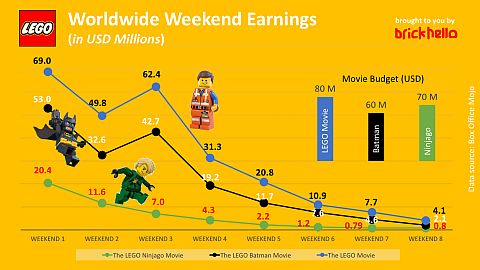 We all know that The LEGO Movie did excellent. The film had fantastic ratings on movie review sites both by critics and the general public. It was fresh, nostalgic, visually appealing, touching and funny. Both young and old LEGO fans could relate to the story and characters. Emmet, Wyldstyle, Batman, Benny, Unikitty, Vitruvius, Lord Business all became household names with their own fanbase, and even words like Kragle has become mainstream. In addition, LEGO released a series of imaginative sets, including Cloud Cuckoo Palace (#70803), Lord Business’ Evil Lair (#70809), MetalBeard’s Sea Cow (#70810), Emmet’s Construc-o-Mech (#70814), Benny’s Spaceship, Spaceship, SPACESHIP! (#70816), and the Double-Decker Couch (#70818). Everything about this movie was awesome!

The success of The LEGO Movie prompted the creation of more films based on LEGO characters. After some delays and changes, in 2017 we ended up getting two films; The LEGO Batman Movie in February, and The LEGO Ninjago Movie in September. As you can see from the chart, The LEGO Batman Movie also attracted a good number of viewers, and the ratings were still very good. The film particularly appealed to Batman fans, who could appreciate all the jokes and references from the long history of the Batman franchise. The LEGO sets related to the movie include every imaginable version of Batman, his friends, foes, and awesome vehicles – all for the great satisfaction of Batman collectors. Some of the most notable sets are The Joker’s Lowrider (#70906), The Batcave (#70909), Arkham Asylum (#70912), The Ultimate Batmobile (#70917), and the soon-to-be-released Joker’s Manor (#70922). And there are more sets scheduled for next year.

Compared to the first two films, The Ninjago Movie faired quite poorly, as you can see from the chart. Ninjago fans who have been following the TV show weren’t happy because their favorite characters were changed, and LEGO fans who weren’t into Ninjago couldn’t relate to the film either. This is reflected in the mixed reviews both by critics and by moviegoers. Once people see the poor reviews, it is unlikely they will shell out money for the high prices of movie tickets (although they may still watch the film later once released on DVD). On the other hand, The LEGO Ninjago movie sets are fantastic, and even people who are not into the movie or Ninjago at all, are raving about them. The incredibly detailed Ninjago City set (#70620), the beautiful Destiny’s Bounty ship (#70618), and the very creative robots and mechs have been getting great amount of praise. And more sets are coming soon, including Garmadon’s Shark Mech!

Why the three films performed the way they did could be analyzed in many ways, but the trend is worrisome and doesn’t bode well for future LEGO-based theatrical releases. Still, there are already a couple of movies scheduled for 2019, including The LEGO Movie Sequel.

Personally, I have seen all three LEGO films, and my favorite is definitely The LEGO Movie. I really wanted to like The LEGO Ninjago Movie, as I love the TV show, but there were just too many changes and the story was too disjointed. I absolutely love The LEGO Ninjago Movie sets though. I’m not so much of a Batman fan, so I couldn’t connect deeply with the story, but it was an enjoyable film overall (you can find detailed reviews of the films at the end of this post).