by Thita (admin) on November 21, 2017
in Building Techniques

Two of my favorite LEGO trains are the #10254 LEGO Creator Winter Holiday Train from last year, and the train from the #79111 LEGO The Lone Ranger Constitution Train Chase

set from 2013. They are very similar old-style steam engines, each with a coal car, a flatbed wagon, and a closed-in wagon. I like them because they are smaller and cuter than regular LEGO trains, but still run on normal LEGO tracks. 🙂 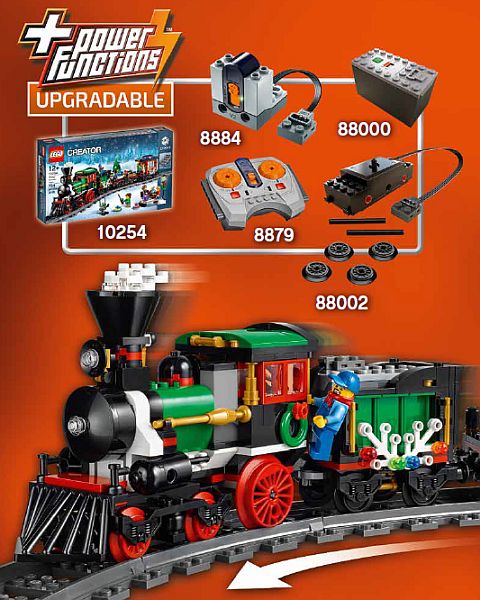 To motorize the #10254 LEGO Creator Holiday Train, you replace the underside of the engine with the Power Functions Train Motor, swap out some parts in front of the conductor’s compartment to accommodate the IR receiver, and insert the battery box into the coal car. Then, you run some wires between the engine, the IR receiver, and the battery box that you stuff into the conductor’s compartment so they are less unsightly. 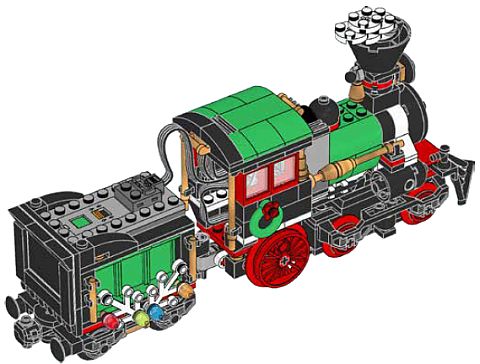 The #10254 LEGO Creator Holiday Train is small, so hiding the Power Functions components is not as easy as in larger LEGO trains. However, LEGO designers did a good job integrating all the parts as much as possible, and I think most LEGO fans would be very happy with the official solution. I really like the look of the original train though, so I wasn’t so happy with the light-gray section that the IR receiver added to the engine, and that the battery box was still slightly sticking out of the coal car. Plus all those wires running in between took away the space for the conductor. So, I was looking for some other ways to motorize this little train.

In the meantime, my other favorite train from #79111 LEGO The Lone Ranger Constitution Train Chase set was sitting un-motorized, because it was not designed with Power Functions in mind. While some trains are easy to motorize even if LEGO doesn’t provide instructions, the Constitution was not one of them. The coal car could hold the battery box the same way as in the Holiday Train, but the engine would take quite a bit of rework to include the train motor and IR receiver.

I have looked for instructions and watched some videos on how to motorize the Constitution but wasn’t really happy with any of them. I love the look of the engine, and the changes it required to accommodate Power Functions was just too drastic for my taste. Then, I found a video where Jason from the BrickShow reviews the set, and at the end, he quickly rigs the train to motorize it by just stacking up the train motor, the battery box, and the IR receiver, and adding the whole contraption at the end of the train. Yes, it’s ugly, but it allows the train to run without any modifications, and without unsightly wires running between the engine and the coal car. 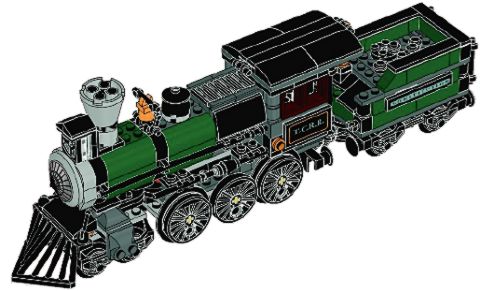 This made me think; what if I just build an extra wagon for my trains that hides the train motor, the battery box, and the IR receiver all in one place? This way, I wouldn’t have to modify the trains at all, and all I have to do is hook up the extra wagon to the back of the train (or anywhere else between cars). The most obvious choice was to build a closed wagon, like the caboose on the Holiday Train, or car with the sliding door on the Constitution. Then just use the train motor on the underside of the wagon, and pack the battery box and IR receiver inside. With larger LEGO trains, hiding the Power Functions components in a wagon is not a problem at all, as the wagons are usually quite large. However, the Holiday Train and Constitution are smaller, so I wanted to keep the size of the extra wagon as small as possible. 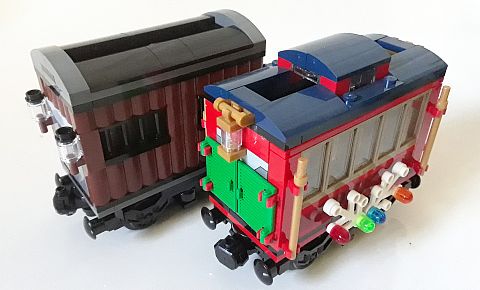 The LEGO Power Functions Battery Box is 4 studs wide, 8 studs long, and 4 bricks tall, and the LEGO Power Functions IR Receiver is 4 studs wide, 4 studs long, and close to 4 bricks tall. So, putting them back to back, and leaving some room for the wires, I concluded that the wagon needs to be a minimum of 12 studs long, 6 studs wide, and 5 bricks tall (not including the roof). The 12×6 footprint also happens to be the minimum needed for the train motor, so I decided to go with this size. Please note that this is the absolute bare minimum, which allows putting walls on the two sides of the wagon to hide the Power Functions components, however the end of the battery box and some of the wiring will be slightly visible at the front and back, as they are 12 studs long together. This didn’t bother me, but you can always make the wagon a couple of studs longer to hide everything. 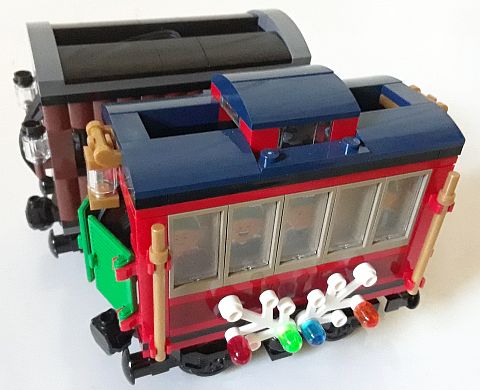 At this point, you can just build a generic wagon with all the Power Functions inside, and then hook up this wagon to any of your trains to motorize them. I decided to get a bit fancier, and match the design of the Constitution wagon, and the Holiday Train caboose. Note that I left part of the roof open. This is so that I can access the on/off button of the battery box without having to remove the roof, and I also found that the IR receiver had a more reliable and greater connection distance with the roof open. You can’t really see these openings unless you directly look down on the train. 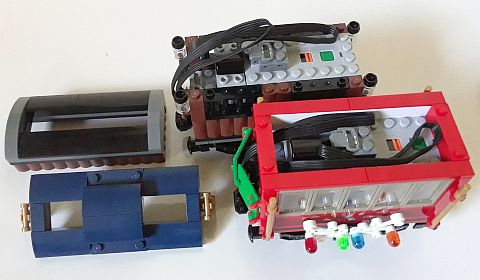 I’m happy to report that hooking up the extra Power Functions wagon at the end of the Constitution and the Holiday Train operates perfectly fine and works even at full speed forward or backward without derailing the train. I can even pull all the cars of both trains with one Power Functions wagon. I prefer to put the wagon at the end of my train, but you can put it anywhere between the other cars as well. All in all, I’m very satisfied with this solution. 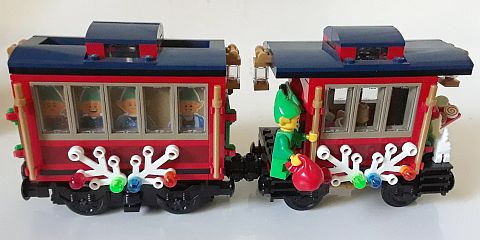 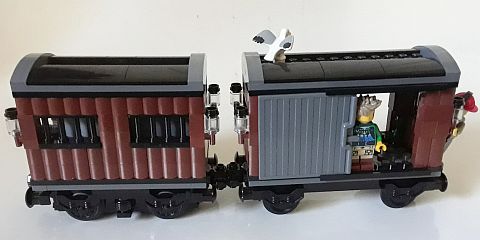 Please note that this solution is for smaller, lighter LEGO trains like the #10254 LEGO Creator Winter Holiday Train, and the train from the #79111 LEGO The Lone Ranger Constitution Train Chase

set. Full-size LEGO trains generally need better balancing, and it is still best to put the Power Functions components inside the engine. But for smaller trains, or trains that are too difficult to motorize in the conventional way, adding a Power Functions wagon is likely all you need. This way, you don’t have to modify your trains at all, and you can easily swap Power Fuctions between them. 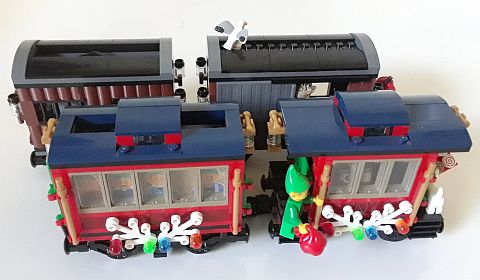 If you want to add a Power Functions wagon like I did, I would suggest that you build a generic car that could work with all your trains. Something like the design of the Constitution wagon works really well, as it fits with pretty much any train from any era. You could also build extra “shells” to match the design of your different trains, and then just swap out the battery box and IR receiver in between them, which is quite easy to do. I ended up buying an extra train motor, battery box, and IR receiver, so I have two fully powered train wagons for my two little trains. 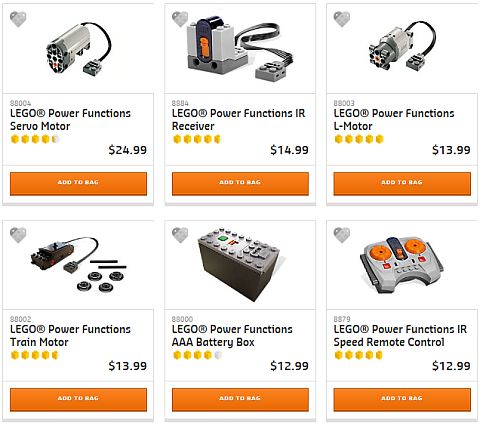 If you don’t have the LEGO The Lone Ranger Constitution, I highly recommend it. It really is my favorite LEGO train – cute in every way! Although it is retired, you can pick it up for a very reasonable price at secondary marketplaces like eBay

or BrickLink. The #10254 LEGO Creator Winter Holiday Train is from last year, so it’s still readily available at the LEGO Creator section of the Online LEGO Shop.

What do you think? Do you have the #10254 LEGO Creator Winter Holiday Train and/or the train from the #79111 LEGO The Lone Ranger Constitution Train Chase set? Or any other of the smaller LEGO trains? How do you like them? Do you motorize them? Or would you like to? And what do you think of my solution of building and adding a Power Functions wagon? Feel free to share your thoughts, questions, and comments below! 😉