LEGO is running another wonderful contest for teen and adult LEGO fans, titled LEGO Winter Wonderland Worlds (see about other currently running contests at the end of this post). As you might have guessed from the title, the challenge is to build a wintery scene to capture the spirit of the season – either within the LEGO Worlds game, or with physical LEGO bricks. Below are the details. 🙂 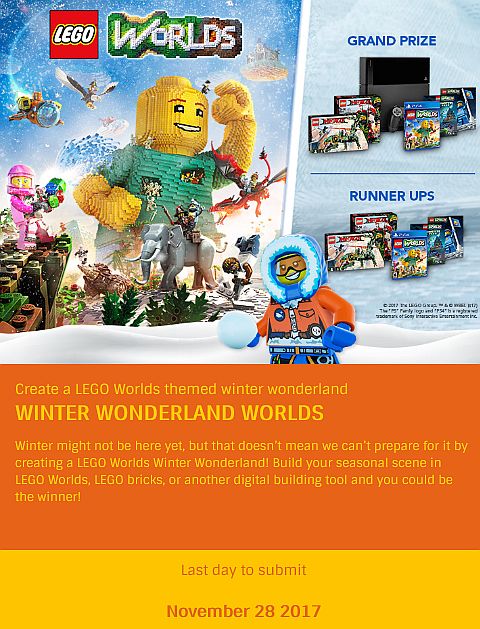 ➡ LEGO WINTER WONDERLAND CONTEST – OVERVIEW: Although it might not be winter outside just yet, LEGO’s ReBrick team challenges you to build the ultimate LEGO winter paradise indoors! Build a diorama or vignette capturing the spirit of the season. You can build in the LEGO Worlds game, using LEGO bricks, or in the digital building software of your choice, such as LEGO Digital Designer. So, get out your winter gear and start building!

➡ LEGO WINTER WONDERLAND CONTEST – HOW TO ENTER: Build your winter scene in LEGO Worlds, LEGO bricks, or with another digital building tool. Take up to five photos or screenshots of your creation and submit them to the contest. Make sure to show off all angles of your creation. Use the description field to describe your entry, then hit “submit”. When you receive a “Success!” pop-up notification after clicking “submit” on the entry submission page, your entry has successfully been submitted. The ReBrick moderation team will review it within 1-3 working days to make sure it fits all the contest rules

➡ LEGO WINTER WONDERLAND CONTEST – RULES: Your entry should depict a winter scene or vignette. Your model does not need to be built in LEGO Worlds (although that is encouraged), and can be built with LEGO bricks or a digital building service, such as LEGO Digital Designer. Your model does not need to be Christmas or holiday based, just winter themed. There is no size limit to entries to this contest. Entries with a strong religious theme are not eligible for this contest. Entries with military themes are not eligible for the contest. Entries containing defamatory or degrading elements will not be eligible for the contest. Entries consisting of or containing copies of any existing third party work or creation or infringements of any third party intellectual property (IP) right will not be eligible for the contest – this includes characters and specific parts from LEGO IP sets such as LEGO Star Wars, LEGO Harry Potter, or The LEGO Movie. as well as all flesh-toned minifigures. Use of characters or parts from LEGO-created themes such as LEGO Ninjago or LEGO Friends are allowed. Entries can be previously built, but cannot be submitted previously in any contest of any kind competing for a prize. Entries must not contain LEGO elements which have been modified from their original form, including painted or cut elements. Use of non-LEGO elements, such as homemade stickers, rubber bands, or clay is prohibited in this contest. Entrants must be at least 13 years of age at the time of entry. You can read the rest of the entry guidelines and rules here.

➡ LEGO WINTER WONDERLAND CONTEST – DEADLINE: You must submit your entry by November 28th, 2017 at 10:00 AM EST. If you are not sure what time zone you are in, you can use an online time-zone converter to make sure you don’t miss the deadline.

➡ LEGO WINTER WONDERLAND CONTEST – JUDGES: A panel of judges from the LEGO Worlds team will select one grand prize winner and eleven runner ups. They will judge entries upon: overall coolness and originality – 25%, most inspired detail – 25%, relevance to contest theme – 25%, best use of LEGO elements – 25%. 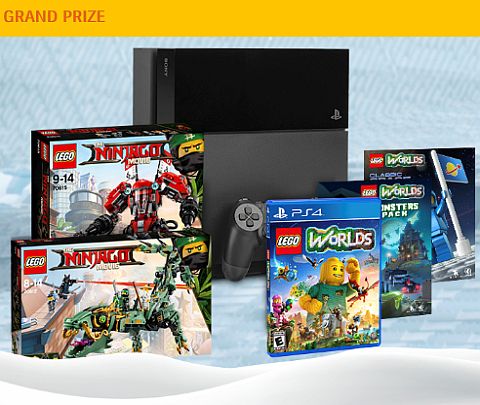 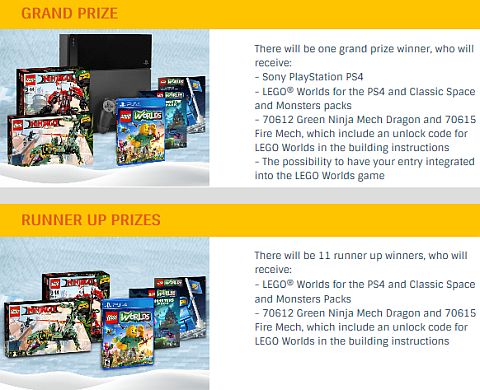 ➡ LEGO WINTER CONTEST – WINNERS ANNOUNCEMENT: Winners will be contacted on the email address associated with their LEGO ID account after December 1st, 2017 and announced on ReBrick when the winners returned the signed Winner’s Certification Documents. A winner who does not return their Winner’s Certification Document within one week (5 days) of receiving it will be disqualified, and a new winner will be selected. 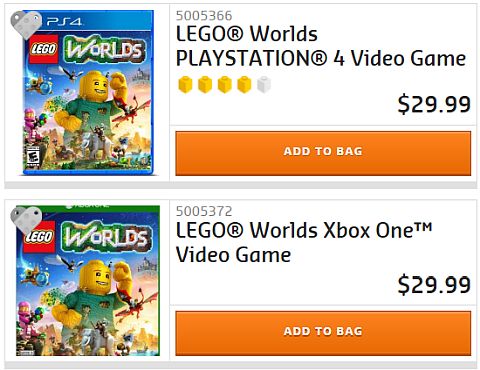 After the fantastic LEGO Ultimate Trains Contest this is another great challenge for teen and adult LEGO fans! I like that there are a number of different ways to enter, and there are really no restrictions on how you interpret what a wintery scene could look like. Also, remember that there are a couple of other LEGO contests that are still running (see below).

What do you think? How do you like the LEGO Winter Wonderland World contest? Are you planning to enter? Do you have some ideas already? Feel free to share and discuss in the comment section below! 😉