If you haven’t done all your LEGO holiday shopping yet, LEGO is offering a second chance in December, along with some new promotions, and new sets. Below, we will discuss what’s new this month, and all the specials you can take advantage of. Happy holidays! 🙂 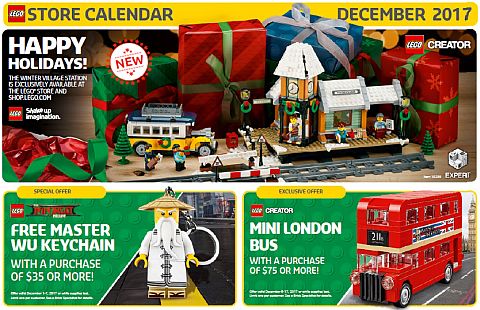 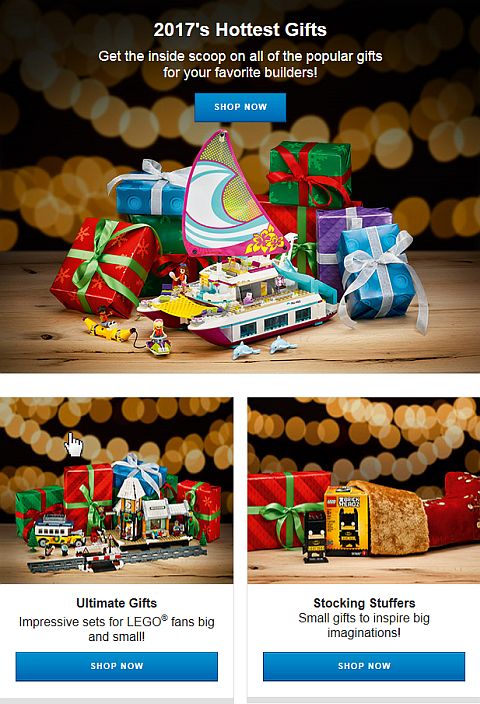 ➡ FREE LEGO CREATOR MINI LONDON BUS: December 8-17 you will get the #40220 LEGO Creator Mini London Bus with purchases of $75 or more. This great little set goes well with the #10258 LEGO Creator London Bus. It’s nice to see that LEGO is making it into a tradition to offer tiny versions of LEGO Creator vehicles. This offer is also valid on all purchases at official LEGO stores and the Online LEGO Shop. 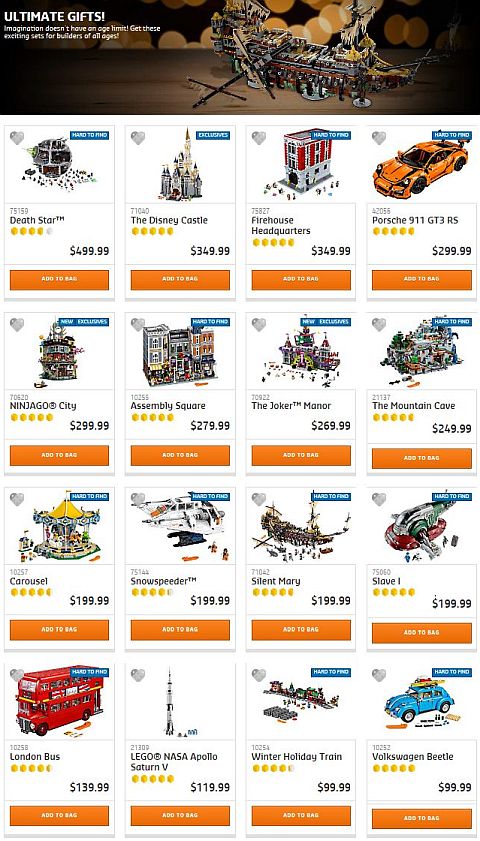 ➡ FREE LEGO STAR WARS DARTH VADER POD: Between December 15 and January 14, you will get a free LEGO Star Wars Darth Vader Pod with purchases of $60 or more. We talked about these little pods previously (see: LEGO Promotional Pods Polybag Collection), and it’s great to see that more are added to the collection. This offer is valid on LEGO Star Wars purchases only. See the Online LEGO Shop.

➡ LEGO DOUBLE VIP POINTS: Yes! LEGO is again offering Double VIP Points for LEGO VIP members (December 8-10)! This means that during the non-Double VIP Points period you can spend your points, and during the Double VIP Points period you will earn twice as much as normal. So, December will be good for both earning and spending VIP Points. Also, remember that VIP Points expire at the end of December, two years after they were originally earned. Make sure you use up any points that you may have left that would otherwise expire (LEGO send out several email alerts if you have any points expiring soon). Double VIP Points is the best time to get large sets, or a number of smaller sets, so you can maximize your earnings on a larger purchase. If you have been eyeing some of the new sets, like the #70922 LEGO Batman Movie The Joker’s Manor and #10256 LEGO Creator Taj Mahal, or the 2018 sets that are starting to show up, this is an excellent time to get them. To see what’s new, visit the Online LEGO Shop. 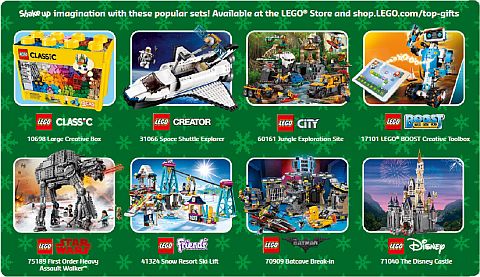 ➡ LEGO BATMAN MOVIE THE JOKER MANOR AVAILABLE: The #70922 LEGO Batman Movie The Joker Manor was released on Black Friday, and it is already getting lots of enthusiastic reviews. The set is massive, with 3444 pieces, and it includes a whole new rollercoaster system, all wrapped around Batman’s manor! You can find the set at the LEGO Batman Movie section of the Online LEGO Shop.

➡ LEGO CREATOR TAJ MAHAL AVAILABLE: Released on Cyber Monday, the #10256 LEGO Creator Taj Mahal is a repackaged version of the #10189 LEGO Taj Mahal from 2008. It is 5923 pieces, and the price is $369.99. If you missed out on the original set, these is your chance to own it for regular retail price. You can find it at the LEGO Creator section of the Online LEGO Shop.

➡ 2018 LEGO CITY SETS AVAILABLE: Several of the 2018 LEGO City sets are now available, including the very fun #60173 LEGO City Mountain Arrest with a bear, a guy in boxers, and a beehive! There are also a number of other great sets, like the #60182 LEGO City Pickup & Caravan. You can find them all under the LEGO City section of the Online LEGO Shop. 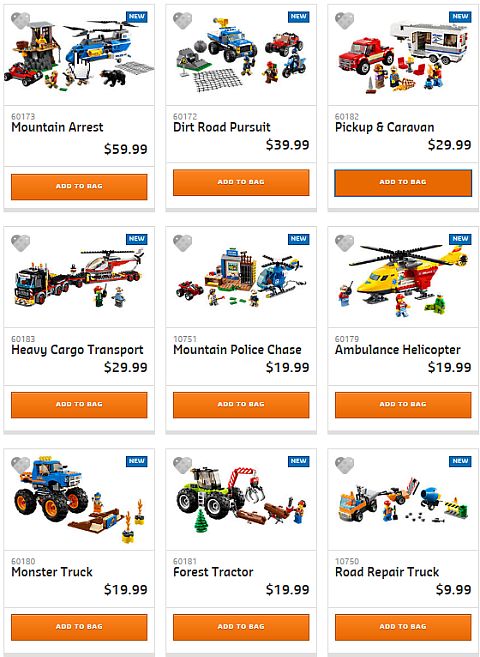 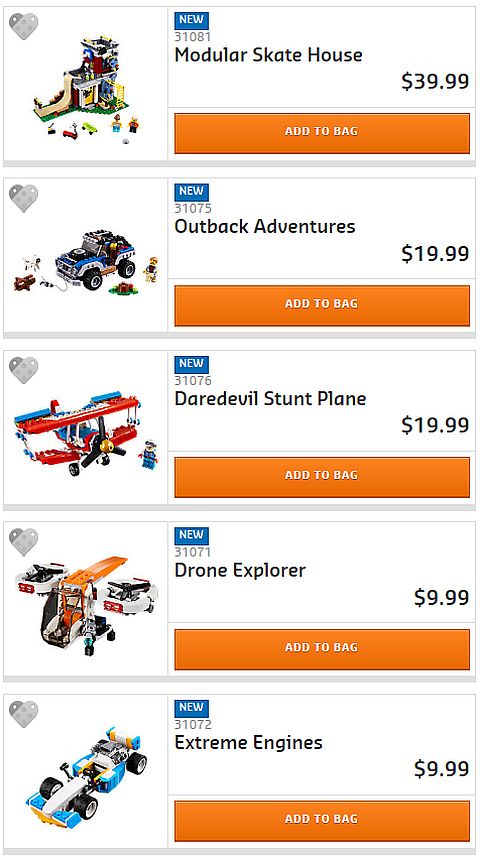 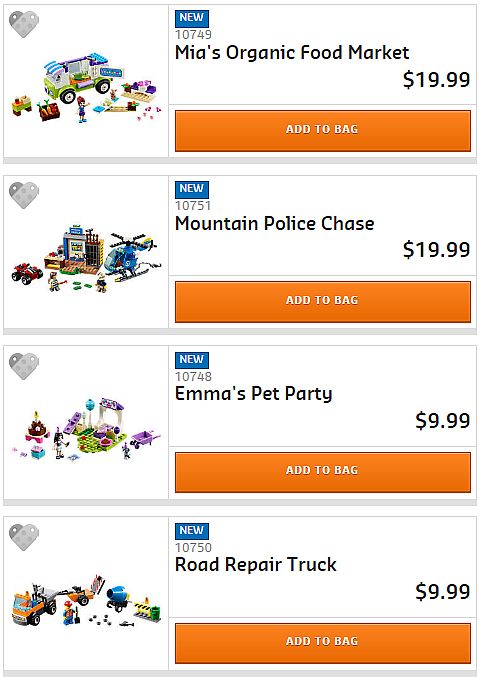 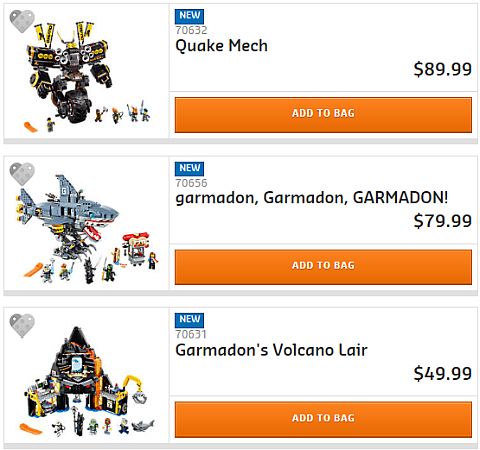 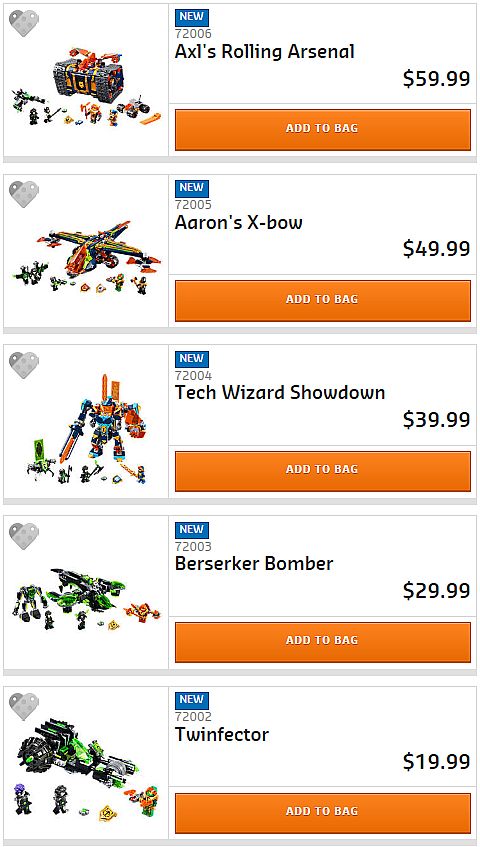 ➡ 2018 LEGO TECHNIC SETS AVAILABLE: Some of the 2018 LEGO Technic sets are also listed early, including the really pretty #42074 LEGO Technic Racing Yacht, and my favorites; the two new LEGO Technic pull-back racers! (I have been collecting those for several years.) You can find them all at the LEGO Technic section of the Online LEGO Shop. 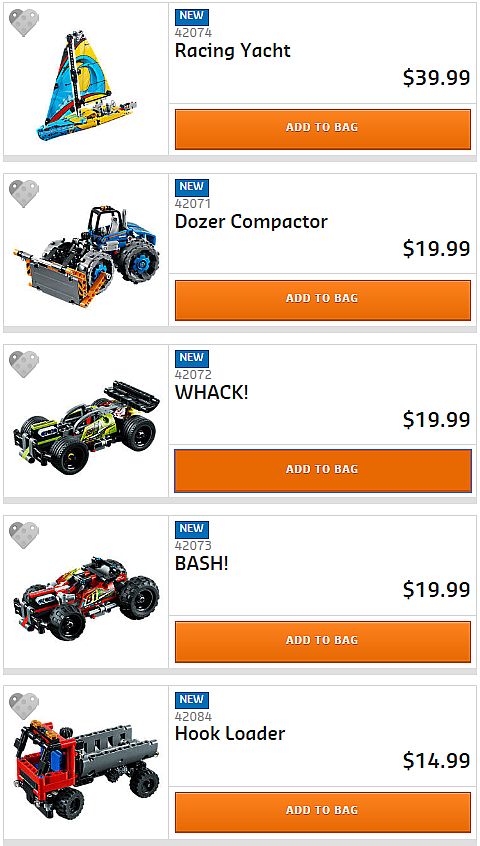 More 2018 LEGO sets should be trickling in between now and the end of the year, so if you are interested to get some early, make sure you check the what’s new section of the Online LEGO Shop. And, of course, you don’t have to focus on the new sets, there are plenty of amazing offers in the 2017 collections as well. This includes the new LEGO Star Wars: The Last Jedi sets, the beautiful #21310 LEGO Ideas Old Fishing Store, the LEGO Juniors sets for younger builders, the LEGO Disney sets, the lovely LEGO Friends Snow Resort sets, the LEGO Minecraft sets, the last wave of the LEGO Nexo Knights sets, LEGO Super Heroes sets (both for DC and Marvel fans), the LEGO Super Hero Girls sets, The LEGO Ninjago Movie collection, all the new LEGO Technic sets, the LEGO BOOST Creative Toolbox, the LEGO Creator London Bus, and more. And before you check out, I also recommend taking a look at the sales and deals section of the Online LEGO Shop to see what’s on clearance. 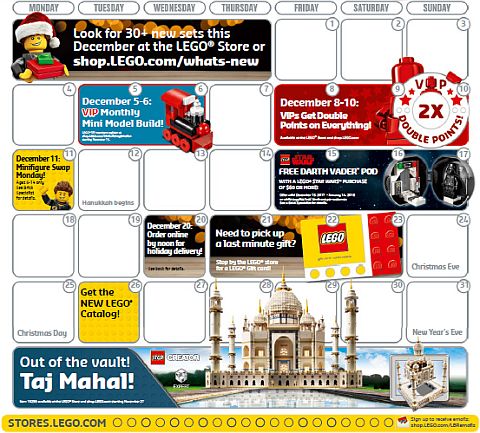 In summary, remember the dates of the freebies the Double VIP Points period (especially if you are planning to purchase some large sets), redeem any VIP Points that are going to expire at the end of the year (if you have any), and check on the 2018 LEGO sets and the clearance items at official LEGO stores and the Online LEGO Shop.

What do you think? Are you done with your holiday shopping already? Or, are you still looking to purchase some new sets and gift items? And what’s on your own holiday LEGO wish list? Feel free to share your thoughts and discuss  in the comment section below! 😉

Next post: LEGO The Joker Manor – yay or nay?