From LEGO to reality: building a climbing wall

Today, I thought to write about a little something different. It is not totally LEGO-related, but it started with LEGO, so I figured it would qualify for the topic of this blog. I was introduced to LEGO as a child by my dad. He is an architect, and he sometimes uses LEGO for modeling new architectural projects. (He also uses many other things, like clay, plastic, cardboard, wood, Styrofoam and – my favorite – chocolate). In fact, I knew LEGO as a modeling medium before I discovered that it was also a toy. With this upbringing, the concept of reaching for LEGO bricks when planning a new building project comes pretty naturally. 🙂 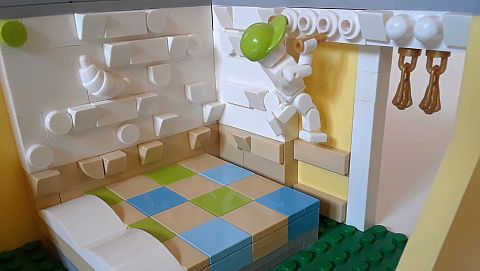 Many people use LEGO to replicate objects from real life that are already built; their house, car, school, church, place of work, and more. However, LEGO can also be used quite effectively when planning new projects. You don’t have to be an architect or designer to use LEGO as a modeling medium. LEGO can help anyone to visualize the size, shape, layout, colors and other details of a new project.

My new project was a climbing wall I wanted to build in our bedroom. I love indoor rock climbing, and our town used to have a really nice climbing gym. However, due to issues with the structural integrity of the building, after many years of accommodating a thriving climbing community, the gym had to be closed. The owners of the old gym have been looking for a new location, but the weeks of waiting turned into months, then years, and we still don’t have a climbing gym. There is a smaller location in a nearby town I sometimes go to, but due to the distance, I can’t make it that often.

Then, I discovered via YouTube that many people build their own climbing walls and bouldering caves, usually in their garage, some other empty space in their house, or even in their yard. I was immediately inspired by the idea and wanted to build my own climbing wall. However, we don’t have a garage, our ceilings are low, and our extreme weather conditions weren’t favorable either.

After looking at pictures and videos of other people’s climbing walls, I decided to choose our bedroom as the location of my wall, mostly because that’s the only unused larger space we had, and this way I could use our bed as a ready-made crashpad. I had enough room to put in a small climbing wall, a short horizontal peg-board, and a hang-board/small system wall. 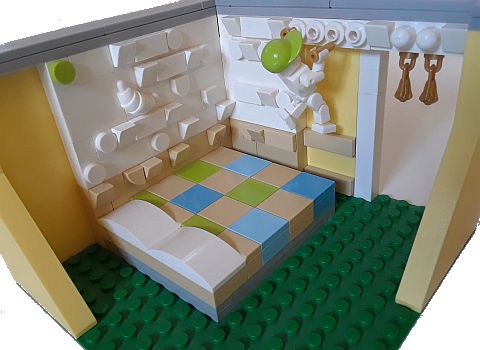 And that’s where LEGO comes in to help with the planning stage of the project. I pulled out my LEGO bricks and built a replica of the bedroom, then started putting in the different elements of the climbing wall. As you can see on the picture, it is a pretty simple layout, but I have never built anything big like this, so working out the details with LEGO was helpful to wrap my brain around all the different steps that needed to be done. I even replicated the studs in the wall to remind myself that it is absolutely crucial to secure the climbing wall panels to the wall studs. I know this is very basic, but as I said, I was new to all of this. 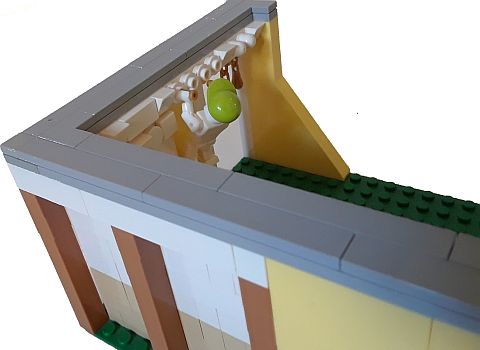 Once I finished building the wall out of LEGO bricks, I was feeling more comfortable with the project and started to believe that I could, in fact, build it for real. The LEGO model was also useful for making a shopping list of all the building materials needed. It is basically three 4’x8′ sheets of plywood, plus some extra plywood for the peg-wall and hang-board. The plywood panels are attached to the studs in the wall by furring strips, leaving some empty space between the panels and the wall. This was necessary, so the different length bolts in the climbing holds have somewhere to go (instead of damaging the wall). Below is picture of how the wall looked like with two sheets of plywood installed, with the furring strips still exposed where the third sheet will go. 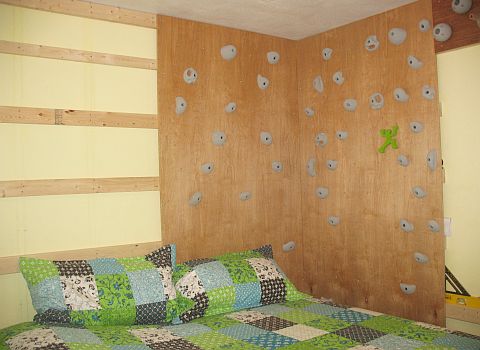 I’m not going to bore you with the details of building a climbing wall on a LEGO blog, but just briefly, here are the steps I followed: 1.) plan layout of the wall 2.) make a shopping list and purchase necessary materials and tools 3.) find studs in the wall using a stud-finder or strong magnet (I used both to make sure) 4.) cut to size and attach 2″x4″ furring strips to the studs in the wall using decking screws 5.) cut to size plywood sheets, drill holes for t-nuts, sand and paint plywood sheets, install t-nuts 6.) attach plywood sheets to furring strips using decking screws 7.) purchase or make climbing holds and attach them to the climbing wall (I got mostly bolt-on holds so I can regularly reconfigure my wall, and also a few screw on holds). 8.) climb!!! 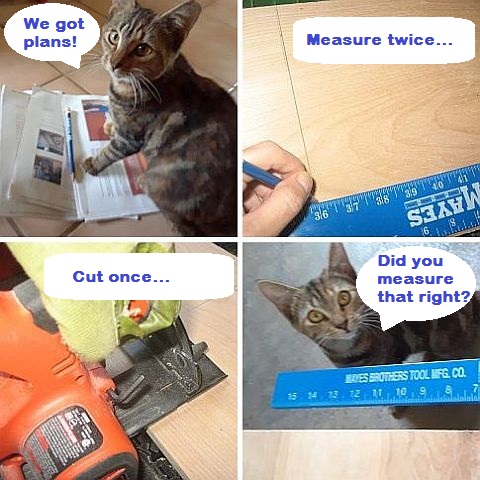 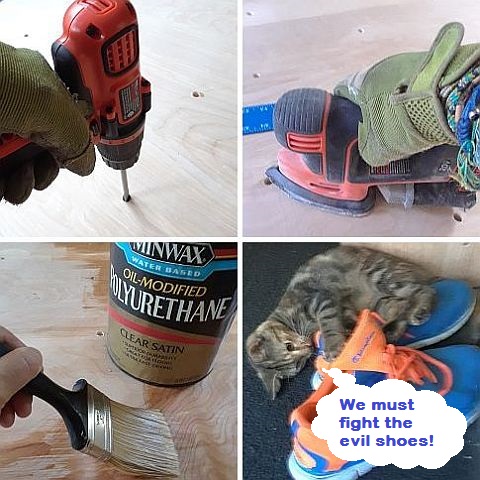 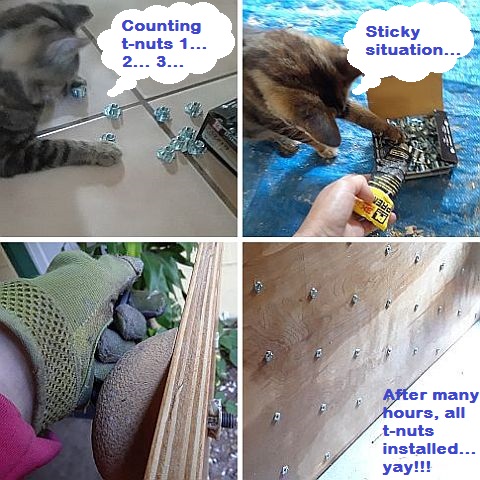 You may have noticed that in the LEGO model of the climbing wall I used tan for the bottom of the wall and white for the upper section. I was originally planning to texture the wall with outdoor deck paint, and those were my choices for color. However, once I saw how nice the plywood sheets looked, I decided to just finish them with several layers of polyurethane coating. Having some parts of the plan change as you work on your project is quite natural. I did stay with white and tan climbing holds though. 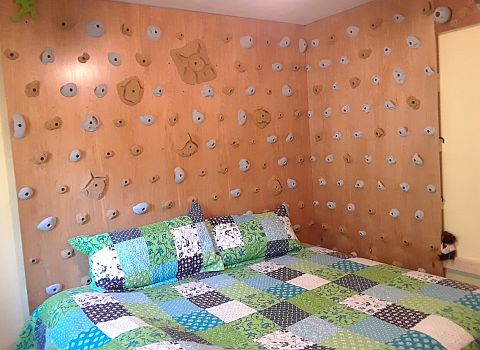 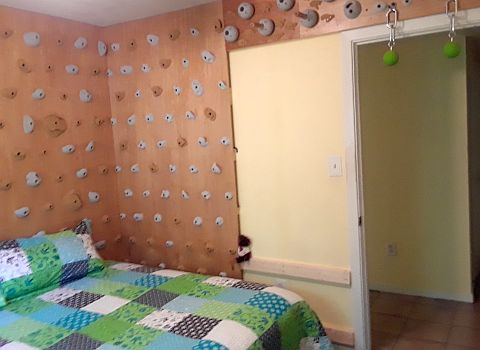 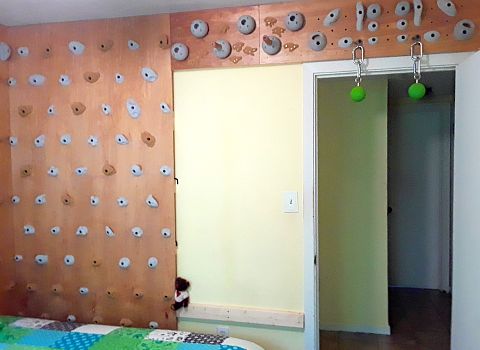 All in all, the climbing wall turned out as planned in the original LEGO model, and I have been really happy with it. I particularly like the peg-board and hang-board section, and those big holds with cracks on the climbing wall section. I didn’t have any hiccups in building the project, but I kept it pretty simple. As you can see, I didn’t add any angled walls or roof climbing. This is mostly because our house is old, and I wasn’t sure about the condition of the wall studs. I didn’t want to put any additional stress on them. With my skill level, this layout should keep me busy for a while. Now I climb every morning when I wake up, and also throughout the day. 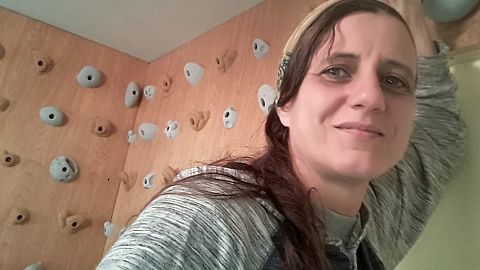 I can definitely say that building the climbing wall first out of LEGO really helped both in planning, and mentally accepting the idea that I can do it. I should add that before this project, my only experience using power tools and building something big was cutting and attaching plywood to cover our windows before a couple of approaching hurricanes. Other helpful tools were some YouTube tutorials about building a climbing wall, particularly this video and this. I have also downloaded a number of free PDF instructions for building the wall, but the one I ended up using was this one from Atomik Climbing Holds. This is also the company where I purchased all my climbing holds, as well as t-nuts, and bolts for attaching the holds.

The kitten you see helping me during the building process is Hiss & Bite. She is a feral kitty left at our place by her mom before hurricane Irma hit our area. Mom never returned, and Hiss & Bite lived through the hurricane hiding out at our carport. During those rough times, and later building the wall together, we became friends. Now she is supervising everything I do…

If you would like to use LEGO for modeling, there are a couple of suggestions that I could offer. One is that if you are planning something for your living space, get away from trying to make it minifig-scale. Minifigs are not realistic representation of humans, so everything in minifig-world is off-scale. Notice that I did not use a regular LEGO door in the doorframe. This is because LEGO doors are not in-scale with real doors. It is better to convert LEGO studs to feet (or meter) instead, and just scale down the space you are working with from real life. My second suggestion would be to stay with neutral, realistic colors, or even just one soft color. This helps with not getting distracted by the bright colors of LEGO during the planning/designing stage. I lucked out, as I had some light-yellow pieces that are the exact same color as the bedroom wall, and I also had all the white and tan pieces I needed. But I could have also made the model with similar soft colors and could have still visualized the project pretty well.

If you don’t have any basic pieces in soft, neutral colors, the #21050 LEGO Architecture Studio set is excellent for starting out with LEGO modeling. It comes with 1211 mostly white and some clear pieces, and even includes a hefty book teaching basic concepts of architecture, design, and modeling with LEGO. You can find it under the LEGO Architecture section of the Online LEGO Shop and on Amazon.com. 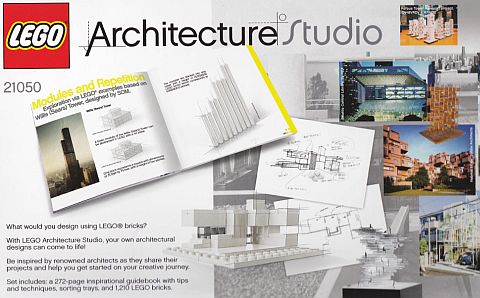 I hope you found this little detour from our regular LEGO news and reviews a bit interesting and informational. What do you think? Have you ever used LEGO for either modeling objects from real life, or planning projects that you were working on? What was your experience? Are there any tips and tricks you would like to add? Feel free to share in the comment section below! 😉