As I mentioned in previous reviews (see links at the end of this post), I’m very fond of these this series, and always get the two new vehicles for the year. The LEGO Technic pull-back motor is quite powerful, and the vehicles are really fun to race. Because they are built of LEGO Technic pieces they don’t fall apart if you fly them over obstacles or crash them into a wall. Also, the two sets for each year can be combined into a larger set with two motors! If you would like more information about how these vehicles work, I recommend you check out the LEGO Technic Pull-Back Racers article as it includes an interesting interview with the designer of the sets. For sets from previous years, see the links at the end of this post, and below, we will look at the two newest sets in the series. 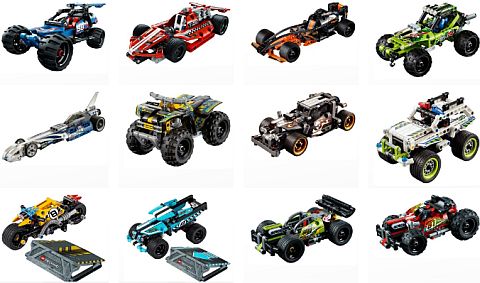 For the first four years, the LEGO Technic Pull-Back Racers series included various racing vehicles. The designs were quite realistic and recognizable with nice shaping and details. The main play-feature of the sets was the pull-back motor, which allowed the vehicles to run pretty fast, and even fly over obstacles. Racing them has been fun and engaging. Starting with the 2017 sets, however the series went through some major modifications. I guess LEGO designers felt that the sets don’t have enough playability, so they added some other play-features besides the pull-back motor. The 2017 vehicles are smaller and less realistic, but they each include a great little ramp. And the 2018 sets come with engine pop-out function at the front, which is activated on impact. 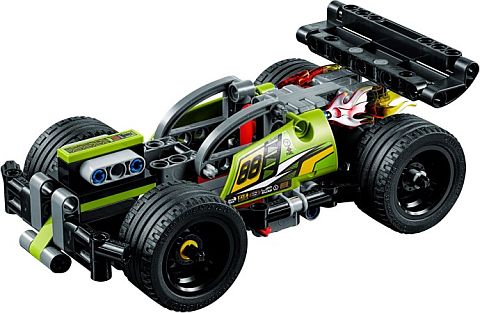 When I initially saw pictures of the two new sets, I was happy with the designs. I always liked the off-road type vehicles in the LEGO Technic Pull-Back Racers series, so I was expecting these two to be similar to the previous ones, like the #42010 LEGO Technic Off-Road Racer from 2013, and the #42027 LEGO Technic Desert Racer from 2014. Once I built them, however, I noticed that there has been several changes from the time the series started. 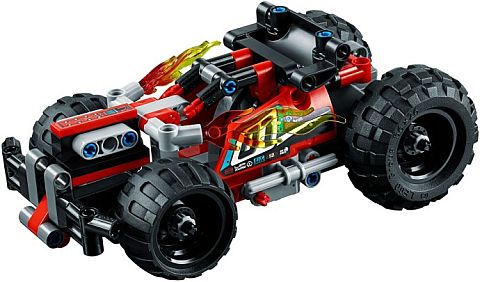 For once, the 2018 LEGO Technic Pull-Back Racers are like the 2017 sets; smaller, and not very realistic. Pretty much all of the sets prior to 2017 had well-shaped cockpits, seats and steering wheels. The 2018 sets do look like off-road vehicles at first glance and from a distance, but once you look at them closer, you will see how they are more a suggestion of a shape rather than anything you would see in real life. There is no seat, no steering wheel, and no real cockpit either.

Also, when you look at the 2018 LEGO Technic Pull-Back Racers from above, you will notice how skeleton-ish they are. All the previous vehicles in the series used 4-8 LEGO Technic panels to shape the sides, and to hide the LEGO Technic frame. However, the 2018 sets only have two panels each, which mean that most of the LEGO Technic framing remains exposed, and leaves the vehicles look unfinished. This is especially visible on the #42073 LEGO Technic BASH! (red & blue car) and even more so when removing the flames.

Speaking of those flames, I like them on #42072 LEGO Technic WHACK! (lime & yellow car). They add a bit of spark and color to the back of the vehicle, and they are nicely integrated. However, on #42073 LEGO Technic BASH! (red & blue car) they don’t make much sense coming out on the sides. It’s evident they were only put there to hide those ugly side gaps. And while doing that, the flames also end up hiding one of the nicest features of the car; the side graphics. In addition, the flames are in the way of holding the car when winding up the motor. I’m considering putting the flames somewhere at the back like on the other vehicle, as the back of BASH! is very plain. But then I would also have to build up the sides. Sigh.. Overall, I would say that neither of the vehicles live up to the earlier models when it comes to design, but from the two, WHACK! definitely looks much better.

Some more bad news is the secondary play-feature; the engine pop-out function. This is the only section of both vehicles that’s built of regular LEGO elements; a 3×4 plate with a row of studs in the middle, two 1×4 plates, a 1×4 LEGO Technic brick, a couple of LEGO Technic lift-arms, and a 1×4 tile. The idea is that when the vehicles hit a wall, a lever at the front pushes off the engine block, making it fly off, and possibly break apart. I can’t say that there is anything wrong with the feature, it does work, it’s just sort of lame, especially for the recommended age-range of 7-14 years-olds. Kids who are interested in building LEGO Technic sets are usually over the let’s-destroy-and-blow-up-things stage. I would think that a nicer shaped nose and sides would have been better appreciated.

Like in all previous years, the two 2018 LEGO Technic Pull-Back Racers can be combined to create a larger vehicle with six wheels, two pull-back motors, and four flames. The combo-vehicle also has the same engine pop-out function. Instructions for this model will be posted on the official LEGO Technic website at the beginning of next year, so I haven’t had a chance to build it yet, but there is a picture on the boxes. Looks like a fully armed racing tank of some sort! 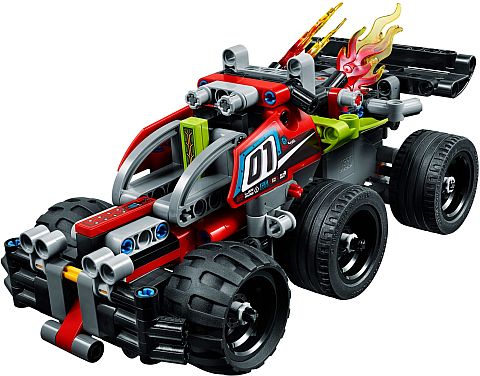 It sounds like I’m only whacking and bashing these two poor cars, but there are some nice features too. The color-combinations and graphics are nice. Both vehicles are very sturdy, run fast, and won’t fall apart while racing and crashing (besides the engine popping out). And as I mentioned, the flames add some nice spark and color. And, those big chunky tires are great. These racers can definitely provide hours of fun. They just don’t look as good as their predecessors. I’m happy I got them, but I favor the older designs. Below, I’m including JANGBRiCKS reviews for both of the sets, so you can see them in more detail and also hear a different opinion. 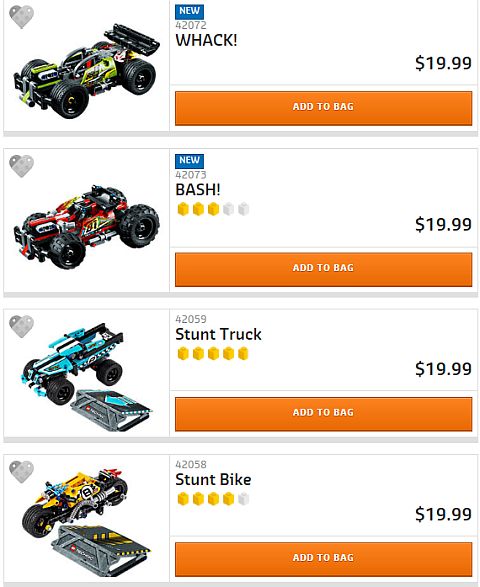 What do you think? How do you like the LEGO Technic Pull-Back Racers? Do you have any of them already? Are you collecting them? Which one is your favorite so far? Feel free to share your thoughts and own review in the comment section below! 😉