Just about a month ago, we talked about LEGO getting a favorable trademark ruling in China (see: LEGO Trademark Ruling in China & More), which, while wasn’t directly against one of the LEGO cloning companies, was still significant in terms of trademark protection. Since then, LEGO had another, even more significant win; this time against one of their most persistent cloners. Read the details below (original press-release here), then we can discuss. 🙂 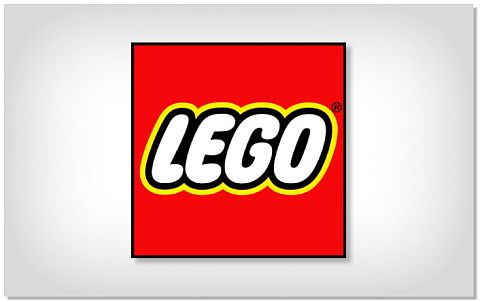 The case was filed against two Chinese companies, which had been manufacturing and selling products that were almost identical to LEGO products. The decisions come into effect in November 2017.

The court decided that the two Chinese companies must stop copying the packaging and logos of LEGO products in the future, as this constitutes copyright infringement. The court also decided that the LEGO Group enjoys protection under Chinese anti-unfair competition laws for the distinctive and unique appearance of certain decorative aspects of its packaging across particular product lines (in this case, LEGO Friends), which serves the purpose of making consumers immediately recognize and associate the products with the LEGO Group.

Peter Thorslund Kjær, Vice President, Legal Affairs in the LEGO Group, said: “We are pleased with the ruling by Shantou Intermediate People’s Court, which we see as a strong indication of the continued focus on proper intellectual property protection and enforcement by the Chinese courts and responsible authorities. We think this is very important for the continued development of a favorable business environment for all companies operating in the Chinese market.”

In case you haven’t heard of BELA before, there is a good reason. Some LEGO cloners are fairly well-known, because their target audience is North American and Western European buyers (selling their products via eBay and AliExpress). BELA, on the other hand, mostly stayed under the radar because they market their products in China, Russia, and Eastern Europe. According to 2015 edition of Communist LEGO by Anthony Tomkins, BELA is an unknown Chinese manufacturer, possibly also selling under the name Jilebao. They produce blatant copies of LEGO Ninjago, LEGO Bionicle, LEGO Hero Factory, LEGO Technic, LEGO Legends of Chima, LEGO Minecraft, and LEGO Friends sets. BELA sets are not just an approximation of LEGO’s own products. They are direct copies, and differ only when specific parts are not available. The box-art and instructions are also direct copies – all BELA does is blur out the LEGO logo from the studs on the pictures. If you would like to know more about BELA, and read a full review of some of their sets, check out Communist LEGO, linked above. It really is an eye-opening and interesting read. 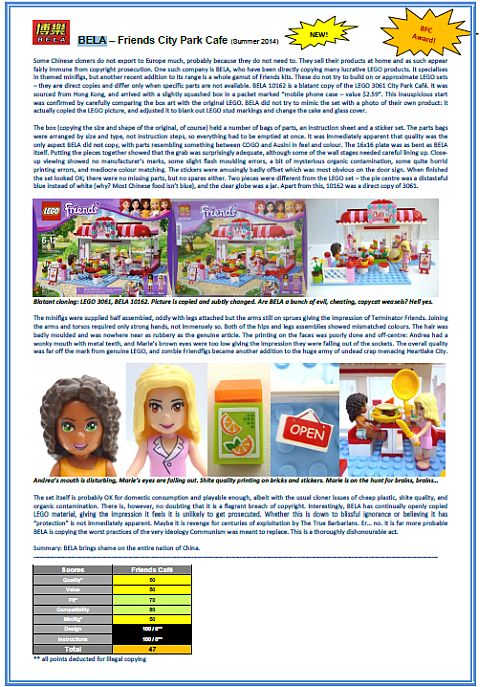 You may have noticed that the ruling of the Chinese court is only against copying the packaging and logos of LEGO products. While this doesn’t sound as strong as ruling against copying the products themselves, in the case if BELA, it might be enough to stop the company from ripping off LEGO. As mentioned above, BELA’s main selling point has been that they copy LEGO’s packaging, making it look like that their sets are just as attractive as LEGO’s own. However, the pieces used in BELA sets are far from LEGO’s quality, or even the quality of some of the better Chinese cloners. So, if BELA can’t put LEGO pictures on their boxes, it is likely going to be the end of the company. Or, they just clone themselves, and start another company under a different name, and the cat and mouse game between the cloners and cloned inside the confusing maze of the Chinese legal system continues…

Taking everything into consideration, I would say that this is the first really encouraging news about LEGO fighting against Chinese cloners. It may take many years, or even decades, for LEGO to protect their brand, but it is necessary, because cloners have shown that they have shame. It is one thing if they would contain their products within China (it still wouldn’t be right though), but they have been clearly getting bolder by the year, and are now aggressively pushing to break into LEGO’s own established markets. So, LEGO really have no choice but to defend themselves. I’m just hoping that Lepin, LEGO’s biggest and boldest cloner, will be next…

What do you think? Do you have any concerns, insights, questions, or comments about LEGO fighting cloners? And what do you think of this most recent ruling? Do you own, or have you thought about buying any LEGO clone sets? What’s your view on them? Feel free to share your thoughts and discuss in the comment section below. 😉

Next post: Fun with the LEGO Ideas Old Fishing Store