Fun with the LEGO Ideas Ship In A Bottle

The #21313 LEGO Ideas Ship In A Bottle was released at the beginning of February, and LEGO fans have been having immense fun with the set. Today, we will take a closer look at the set itself, as well as some of the creative ways LEGO fans have been playing with the original model. 🙂 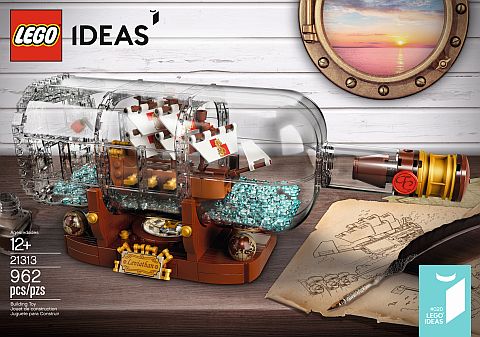 The LEGO Ideas Ship In A Bottle project was originally submitted to LEGO Ideas by LEGO fan Jake Sadovich from Idaho. Jake was inspired by an actual ship in a bottle that he had built a few years earlier, and he decided to take on the challenge of recreating the famous combination of artwork and puzzle in LEGO brick form. After reaching the milestone vote count of 10,000, Jake’s design was selected to become an official LEGO set. See more pictures of the project at the LEGO Ideas submission page, and read more about the project and its creator in this interview at the LEGO Ideas blog. 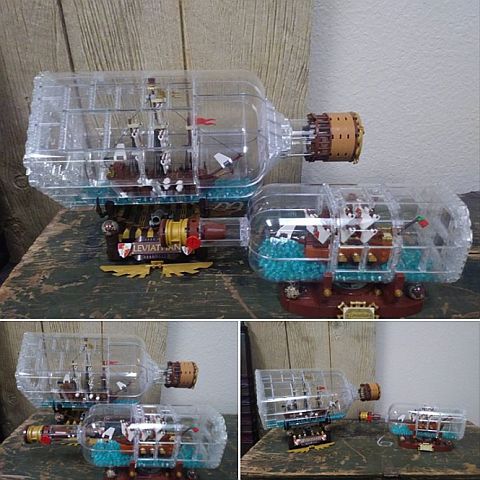 When a LEGO Ideas project gets approval to become an official LEGO set, LEGO’s own designers modify the model to bring it in line with LEGO’s strict standards for design, playability, building experience, and budget. The LEGO Ideas Ship In A Bottle was worked on by LEGO designer Tiago Catarino, and LEGO graphic designer Mark Tranter. In the video below, they discuss some of the highlights and challenges of finalizing the design for the #21313 LEGO Ideas Ship In A Bottle set. (Comparison pictures above from Jake posted on Facebook.)

As discussed in the video above, the most drastic change that was done to the original model was reducing the size of the bottle, which also meant that the ship had to be made smaller. This is unfortunate, as the original ship designed by Jacob was a truly beautiful miniature sailing ship. Nonetheless, the designers were able to retain some of the features of Jacob’s ship, and the bottle itself and the stand were nicely refined. I particularly like the bottle cap and the compass built into the stand. All the decorated pieces are printed, which is another plus. In the video-review below, JANGBRiCKS will show you the set in more detail.

The #40290 LEGO 60 Years of the LEGO Brick promotional set became available just about the same time as the #21313 LEGO Ideas Ship In A Bottle. The commemorative set includes a miniature version of the #6285 LEGO Pirates Black Seas Barracuda from 1989. This naturally brings up question; would the miniature pirate ship fit inside the bottle? The answer is yes, it fits perfectly! See the video below, also by JANGBRiCKS.

LEGO fans have also been experimenting with what else they can fit inside the bottle besides the original ship and the pirate ship. The bottle on stand measures around 3″ (10cm) high, 12” (31cm) wide and 3” (10cm) deep, and the ship itself measures around 3″ (8cm) high, 5” (14cm) long and 1” (5cm) wide. Working with these sizes, it turns out that the bottle can accommodate most micro-size LEGO models. The LEGO Star Wars Microfighter sets and the LEGO Super Heroes Mighty Micros are particularly great for this purpose. In fact, you can even put two of the models inside to create a little action scene! The examples below are by LEGO fans woodpiece and warrenchang, and there are many more. 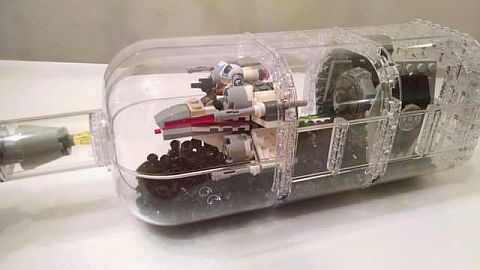 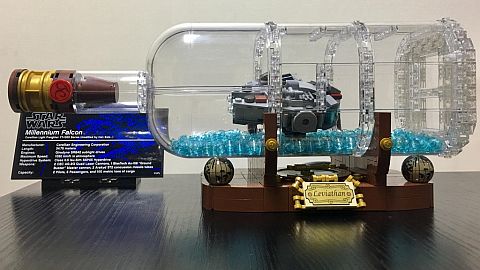 And how about putting a giant octopus inside the bottle to frighten the sailors? The octopus here is actually this Nanoblock set, but you can of course also build your own LEGO octopus, or use a moulded LEGO octopus figure. And for a truly aerie and ghostly feel, you can replace the “water” with glow-in-the dark elements. (Pictures below by LEGO fans the_hazmat_man and pumpkinsunrise.) 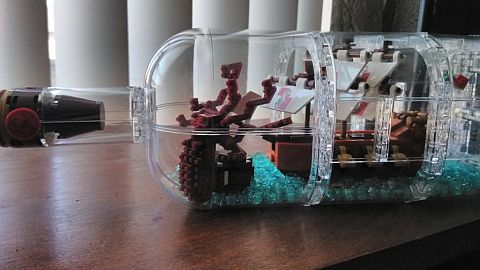 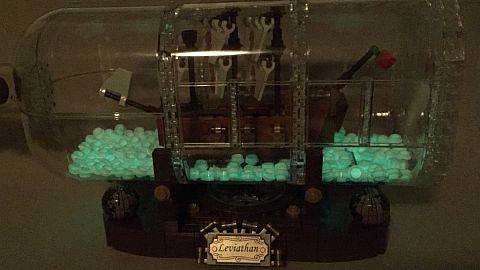 And you can also use the ship’s bottle for something sweet, like this lovely Valentine’s Day scene by Shelly Corbett from ToyPhotographers.com. 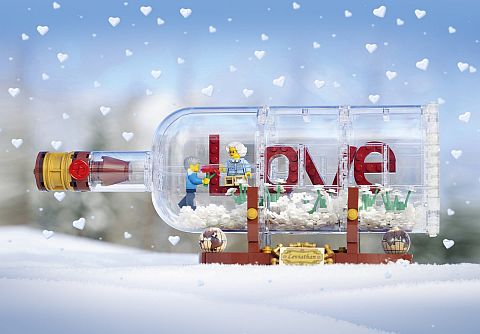 If you want your minifigs to have their own tiny version of the LEGO Ideas Ship In A Bottle, you can even build them a tiny micro-scale model! The examples below are by LEGO fans Jme Wheeler and elijahbormann.

Modifying the #21313 LEGO Ideas Ship In A Bottle is not the only way to have fun with it. To celebrate the launch of the set, LEGO teamed up with the incredibly talented brickfilmers from Silent Frames to produce a fun little animation that you can watch below. And there are other LEGO animations inspired by the set as well, and I’m sure there will be more in the future.

Overall, the #21313 LEGO Ideas Ship In A Bottle turned out to be a great set, even though it’s quite different from the original submission. It looks fantastic on display, and it also inspires play and creativity. The parts are also very useful, including 284 translucent-light-blue round plates (plus a couple of extras), beautifully decorated printed pieces, large clear parts, pieces in the recently resurrected teal color (hidden inside the base), and more. There is a lot to like here! If you don’t have the set already, you can check it out at the the LEGO Ideas section of the Online LEGO Shop.