Last week, LEGO celebrated the 60th anniversary of the LEGO brick patent, filed back in 1958. LEGO has been posting quite a few interesting images and videos on their social media pages to commemorate the event, some of which I will share below. LEGO is also currently offering a number of LEGO Classic sets with a special 60th anniversary 2×4 printed tile, and there are some other exclusive sets as well via retailers. Today, I thought to summarize all the 60th anniversary sets we know about so far. I know many collectors will want to get them all due to the special boxes and nostalgic value, so it’s good to have information about them in one place. Also, don’t forget about the #40290 LEGO Promotional 60 Years of LEGO Brick set, free with purchases of $125 or more until February 44th at official LEGO stores and the Online LEGO Shop. 🙂 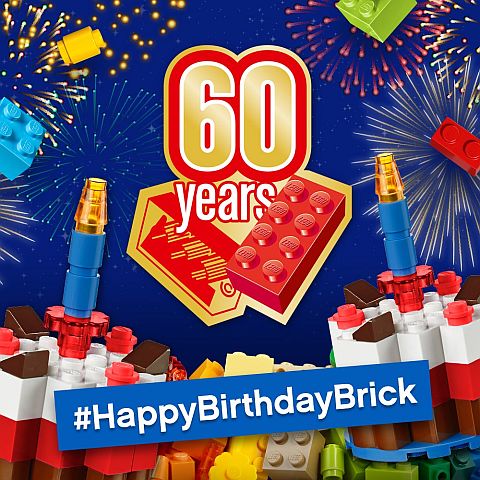 Here is an exert from LEGO’s press-release about the event: 60 years ago, the simple idea of adding tubes inside a plastic brick turned into one of the most exciting and influential toys in the world – the LEGO brick. Since then, LEGO play has been about the joy of building and giving every child the chance to shape their own world through inventive play. “LEGO play is powered by imagination and curiosity, and the LEGO brick is at the very heart of it – putting the bricks together and taking them apart over and over, with imagination as your only limit. This helps young minds to stay open, keep exploring and develop skills essential for the 21st century, such as creativity, collaboration and problem-solving,” said Julia Goldin, Chief Marketing Officer, the LEGO Group. The LEGO Group began producing a plastic brick in 1949, but it was not until nine years later, in 1958, that the LEGO brick we know today was born. It took several years of iterations to find the iconic design, which has not been changed significantly since. The unique design and the uncompromised focus on quality and safety during the past six decades ensure that two LEGO bricks produced 60 years apart can still fit together.

LEGO also released a really nice video with interesting historic footage from LEGO’s headquarters and first factory in Billund, Denmark, It shows the LEGO set production process from design to delivery way back in the early days. Historians will love this video!

As far as sets, there are five special releases under the LEGO Classic line to commemorate the 60th anniversary of the LEGO brick. They come under the LEGO Building Bigger Thinking sub-theme, which is printed at the bottom left corner of each set. The boxes also feature a big red question mark, referencing that you are free to build whatever you can imagine. Besides the unique box print and the 60th anniversary 2×4 printed tile, the sets are much like all the previously released LEGO Classic sets with mostly basic LEGO elements in a rainbow of colors, and a few suggestions in the instruction booklet to inspire free-building. 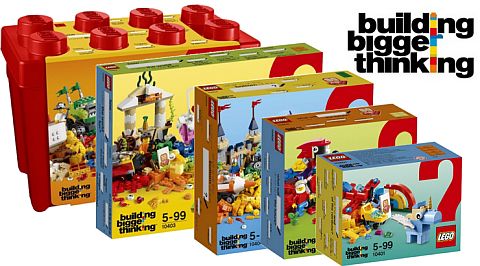 There is also a sixth LEGO Classic set, which is released in both a standard LEGO Classic box, as well as a limited-edition 60th anniversary box. Both versions of the #10715 LEGO Classic Bricks On A Roll set are 442 pieces. The anniversary version has some really nice vintage images on the box. According to LEGO historian Gary Istok, the first panel on the front of the box shows the #306 LEGO Classic VW Garage set from 1958, the second panel is an early 1960s brochure with the elephant compound at a LEGO zoo, and the third panel features an old European LEGO catalog from 1967. The little guy in the red overalls is the “LEGO Gnome” used on LEGO boxes and in advertisements between 1956-1963. I’m sure this set is going to be very popular with collectors because of the packaging! The standard version of the set is available directly from LEGO and LEGO retailers, and the anniversary edition is available through Wal-Mart (and likely directly from LEGO and perhaps other retailers at different regions). 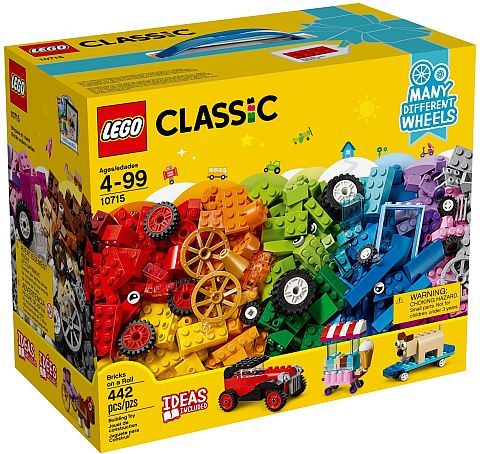 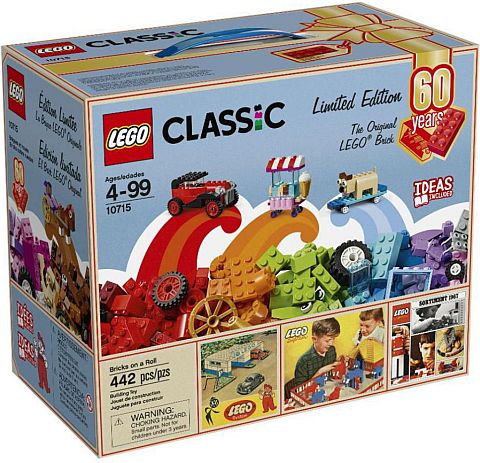 There are also at least three more LEGO Classic anniversary sets available at Wal-Mart (and likely directly from LEGO and perhaps other retailers at different regions), which take us way back in LEGO’s history. While the previously mentioned sets are modern products in vintage-style packaging, the following three sets are built in vintage style, and packaged in vintage style boxes. The #4000028 LEGO Classic House is a remake of the #326 LEGO Classic Small Cottage from 1965 with a red roof instead of the original blue. The #4000029 LEGO Classic Windmill, and the #4000030 LEGO Classic Truck aren’t exact remakes, but are still very similar to old LEGO windmills and vehicles from the 1960s and ’70s. Each of these sets are $19.99.

Although we already talked about the #40290 LEGO Promotional 60 Years of LEGO Brick set before, for the sake of completeness I will mention the most important details about it here. The set includes 421 pieces to build mini versions of four iconic releases from the past; the #375 LEGO Classic Castle Yellow Castle from 1978, the #497 LEGO Classic Space Galaxy Explorer from 1979, the #6285 LEGO Pirates Black Seas Barracuda from 1989, and the #6399 LEGO Town Airport Shuttle from 1990. Collectors are already super excited about this set, so I would suggest getting it as early as possible before LEGO runs out of stock. It is available free with purchases of $125 or more until February 14th at official LEGO stores and the Online LEGO Shop. 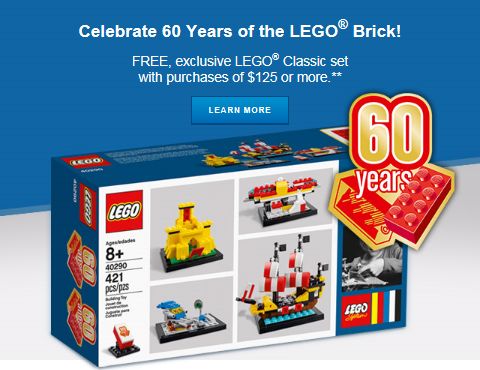 It is very likely that there will be other sets and promotional items celebrating the 60th anniversary of the LEGO brick throughout the year, but these are the ones we know about at this point. The first five LEGO Classic sets we talked about are already available, along with the free promotional set, and the other sets will be released at a later date. If you are a collector and interested to get all of the promotional sets, I would suggest keeping an eye on the LEGO Classic section of the Online LEGO Shop. 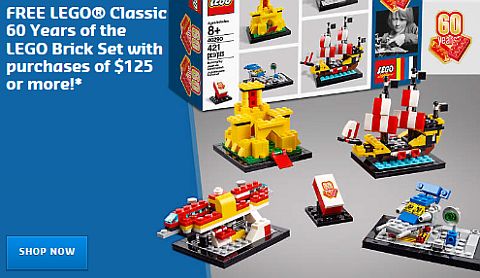 What do you think? Are you planning to collect the LEGO Classic 60th anniversary sets? Which one is your favorite? Do you have any of them already? And what other sets would you like to see in the collection? Feel free to share your thoughts and discuss in the comment section below! 😉

Next post: LEGO at the 2018 toy fairs news summary