by Thita (admin) on February 16, 2018
in Featured LEGO Creations

Legendary American puppeteer, artist, cartoonist, inventor, screenwriter, and filmmaker Jim Henson was very much part of my childhood. I’m from the Philippines, and the Muppets were a huge influence on me during my formative years. They were essentially my first teachers. They taught me how to read, write, count and laugh. I’m sure millions of people around the world have had the same experience as I did. Jim’s work continues to inspire me even as an adult. In fact, it’s part of the reason why I pursued a career as a filmmaker. I try to create stories that tickle people’s imagination. 🙂

LEGO is another great medium to taps into limitless creativity. Whenever I design something with LEGO bricks, it’s like I’m able to visualize every wild thought that runs amuck in my brain. To combine my love and appreciation for Jim Henson’s legacy, and my passion for LEGO, I submitted several projects on LEGO Ideas based on his work; 123 Sesame Street, The Muppet Show, Labyrinth, and The Muppeteers. 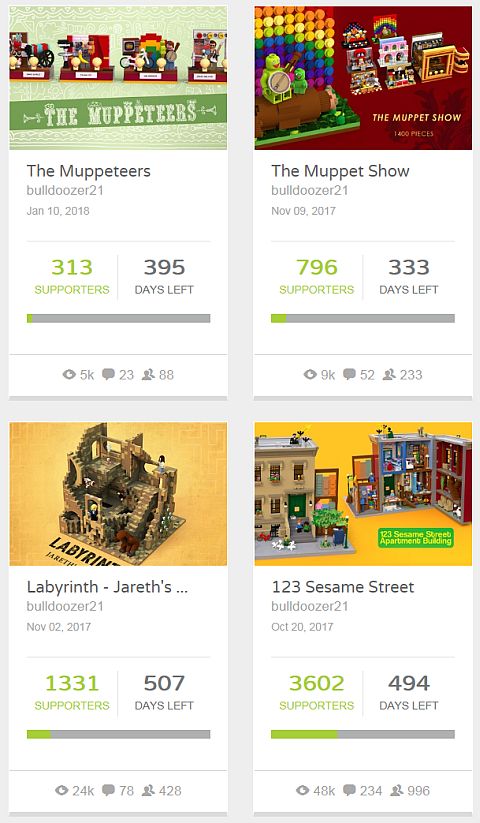 When I designed the Sesame Street model, I wanted to capture my childhood memories of the neighborhood from the show. With The Muppet Show project, I was putting on a madcap, vaudevillian theater production that felt totally insane, but also very real. In the Labyrinth model, I attempted to create a three-dimensional optical illusion. And finally, in The Muppeteers project, I wanted to capture the magic that happens in front of and behind the camera. Below, I will tell you a bit more about each LEGO model, and if you would like any of them to become an official LEGO set, I also included links where you can vote for it. Your support is very much appreciated. 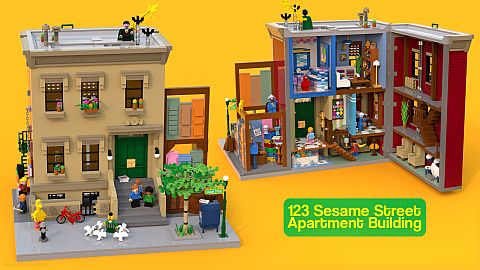 ➡ LEGO IDEAS PROJECT – 123 SESAME STREET: For nearly fifty years, millions of kids around the world have been asking “Can you tell me how to get to Sesame Street?” With this proposed LEGO Ideas set, you can find Sesame Street right in the middle of your own LEGO city, and recreate your favorite moments from the show. This playset features renditions of several rooms from the show’s long history, including Bert and Ernie’s apartment, Gordon and Susan’s dining room, Maria’s living room, and Elmo’s World. You’ll find many Easter eggs that reference specific episodes and comedy sketches from the show. The back wall opens out for easy play access and lets your imagination soar. Includes 14 minifigures: Bob, Gordon, Susan, Bert, Big Bird, Oscar the Grouch, Biff, Sully, Ernie, Cookie Monster, Count von Count, Prairie Dawn, Grover, and Elmo. Also comes with Dorothy the Goldfish, Slimey, Batty Bats, Bert’s pigeons, Radar, and Rubber Duckie. You can see many more pictures, and vote for this project here: LEGO IDEAS 123 SESAME STREET 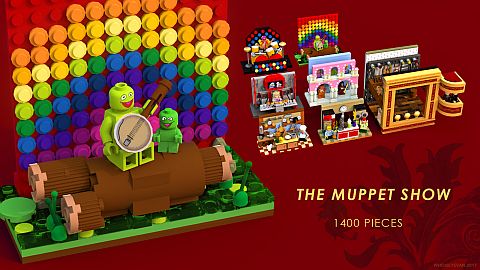 ➡ LEGO IDEAS PROJECT – THE MUPPET SHOW: It’s time to get things started on the most sensational, inspirational, celebration, Muppetational LEGO set ever! For over 60 years, The Muppets have captured the hearts of millions of fans around the world. Now, for the first time ever, join Kermit the Frog, Fozzie Bear, Miss Piggy, and the Great Gonzo in this zany LEGO recreation of the Muppet Show stage. This miniature playset beautifully houses some of the Muppet’s most hilarious and endearing production numbers through the years. The theater proscenium features an ornate red and gold facade harkening back to the show’s vaudevillian roots. Behind the curtain, get a glimpse at what happens behind-the-scenes with lights, ropes, a ladder, wiring and a working back door. It’s just like a real theater! The mainstage includes 6 mini diorama sets and a detachable balcony. With ‘you’ as the guest star, start off the show with a recreation of the Muppet Show’s opening theme. Then, you’ll be able to act out wacky experiments in Muppet Labs, cook-up a feast in the Swedish Chef’s Kitchen, rock out with Animal, or explore the endless frontier on the set of the USS Swinetrek. When it’s time for the closing number, join Kermit and Robin for a colorful rendition of the song The Rainbow Connection. If that’s not enough, Statler and Waldorf will throw in a quick heckle or two. Includes 10 minifigures: Kermit the Frog, Firstmate Piggy, Fozzie Bear, Statler, Waldorf, the Swedish Chef, Dr. Bunsen Honeydew, Beaker, Animal and Gonzo. It also includes several pack-in and buildable characters such as, Robin, a baby Koozebanian, Gaffer, Camilla, singing vegetables and Waldo C. Graphic. The model is built using 1400 pieces. You can see many more pictures, and vote for this project here: LEGO IDEAS THE MUPPET SHOW 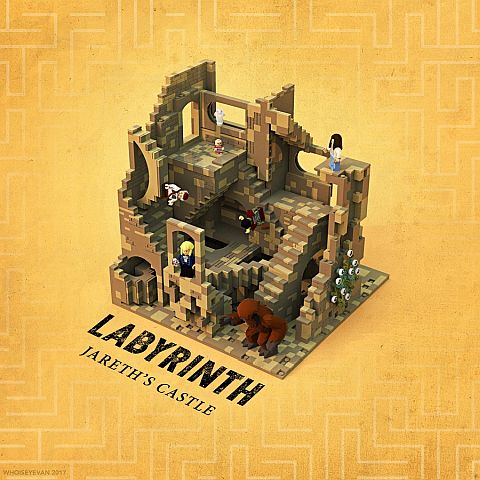 ➡ LEGO IDEAS PROJECT – LABYRINTH: In this LEGO Ideas project, we journey back to Jim Henson’s classic fantasy film, Labyrinth! Three decades after it’s release, Labyrinth, starring David Bowie and Jennifer Connelly, continues to enthrall audiences with a magical mix of fairytale and pop rock music. This model recreates one of the pivotal scenes in the film’s climax. Jareth’s Castle features tangled paths and endless staircases, inspired by the illusory art of M.C. Escher. This dizzying maze of ups and downs was designed to confuse and disorient Sarah in her quest to rescue her baby brother from Jareth the Goblin King. The Escher Room’s gravity-defying properties are delightfully captured in LEGO form. Each zig-zagging wall or staircase allows minifigures to ‘walk’ across horizontally, vertically, or even upside-down. This chamber perfectly depicts the fanciful, maze-like quality of the entire film. It’s a place where illusions are real and imagination can run wild in all directions. Includes six minifigures: Jareth, Sarah, Hoggle, Ludo, Toby and a goblin. It includes a Labyrinth book, a hammer, a barn owl, as well buildable Eye Lichen and Worm. The model is built using 1490 pieces. You can see many more pictures, and vote for this project here: LEGO IDEAS LABYRINTH 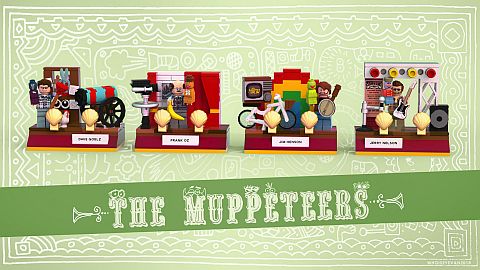 ➡ LEGO IDEAS PROJECT – THE MUPPETEERS: This is my most recent LEGO Ideas project, where you can go on a behind-the-scenes look at the Muppets with four of the original puppeteers behind the groundbreaking, television phenomenon known as The Muppet Show! This LEGO model celebrates the art, the music, the comedy and the magic of the Muppeteers, featuring Jim Henson, Frank Oz, Dave Goelz and Jerry Nelson. Each Muppeteer includes a minifigure of their most iconic puppet creation, as well as a theater stage backdrop illustrating their expertise. Muppet creator Jim Henson comes with a mini Kermit the Frog puppet, a banjo, a Rainbow Connection backdrop, a bicycle (inspired by The Muppet Movie), and a television set with The Muppet Show logo. Director Frank Oz comes with a mini Fozzie Bear puppet, a banana, a Manhattan Melodies poster and a television camera. His backdrop is split between a stage curtain and a backstage area, highlighting his career as both a puppeteer and a film director. Dave Goelz comes with a Gonzo the Great puppet, a plunger, a cannon and a Muppet chicken. His backdrop features a Muppet Workshop supplies cabinet (based on The Art of the Muppets exhibit), to showcase his early career as a Muppet designer and builder. Musician Jerry Nelson comes with a Floyd Pepper puppet, an electric guitar, a speaker and a microphone. His backdrop features a stage lighting set-up inspired by the Electric Mayhem band, as well as a theater poster featuring popular songs performed by many of his characters. You can see many more pictures, and vote for this project here: LEGO IDEAS THE MUPPETEERS

All four LEGO Ideas projects were painstakingly researched using stills, clips from the show or films, concept art, style books and behind-the-scenes photos. I designed all four sets in LEGO Digital Designer and rendered them using Bluerender. I designed all the decals in Photoshop. I hope you enjoy checking out these projects as much as I enjoyed building them. If you would like any of them to become an official LEGO set, please vote at the above links. I think it would be a wonderful appreciation of Jim Henson’s legacy to have any of these projects become an official LEGO set. Thank you for your support! And you can also check out all the other sets originally designed and submitted by LEGO fans under the LEGO Ideas section of the Online LEGO Shop.

What do you think? Did Jim Jenson influence your childhood as much as mine? Would you like to see his legacy commemorated in a LEGO set? Which one of these projects do you think has the best chance of becoming an official LEGO set? Feel free to share your thoughts and discuss in the comment section below! 😉

Previous post: Fun with the LEGO Ideas Ship In A Bottle