LEGO released a number of new sets under the LEGO Disney line we haven’t talked about yet. This doesn’t mean they aren’t good sets, it’s just that several of them are re-releases, or too similar to earlier sets, and thus not as exciting. Still, some of the sets have some interesting details and concepts that are worth talking about. So, let’s take a look. 🙂

The most anticipated set in the new LEGO Disney collection is related to the Disney film, Mulan. LEGO fans were expecting to see Mulan in both her regular dress and her warrior outfit, as well as her parents and associates, and sets with Chinese architecture-inspired details. There was also hope that we may get several nice sets, as a live action movie based on the story of Mulan has also been in the works. Unfortunately, LEGO ended up making only one small set for Mulan; the #41151 LEGO Disney Mulan’s Training Day. It includes Mulan in her yellow dress with a sword, and some very small vignettes with nothing particularly interesting. The whole set is quite disappointing and seems like a wasted opportunity. The price of $14.99 is not very attractive either. It really should be $5 cheaper, or have more details/characters included. Mulan herself is very pretty, and the only reason to get this set. I would recommend waiting until you can find it on sale either at LEGO retailers or at the LEGO Disney section of the Online LEGO Shop. 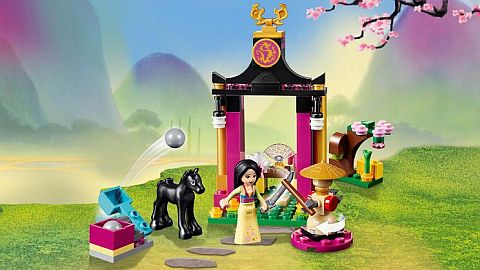 The LEGO Disney line is trying something new; accessory sets. The #40307 LEGO Disney Castle Interior Kit, and the #40388 LEGO Disney Mini-Doll Dress-Up Kit both include small, buildable furniture, household items, assorted decorative accessory elements, various fabric pieces, stickers, and more – but no mini-dolls. The idea here is that you can use these sets to enhance the interiors of any of your existing LEGO Disney sets, no matter which Disney princess it belongs to. Each of the sets is $9.99, which is not too bad, although I feel they would have a better chance if LEGO also included a couple of cute animals. You can find both sets under the LEGO Disney section of the Online LEGO Shop. 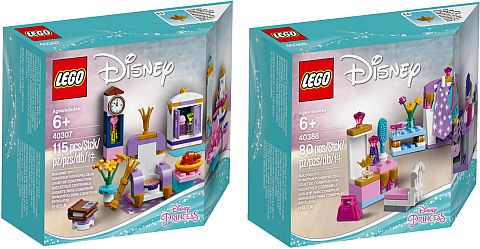 Another small sets that was just recently released is the #41155 LEGO Disney Elsa’s Market Adventure. This is also mostly an accessory set with a couple of small vignettes, an Elsa mini-doll, and a brick-built Olaf. This set also suffers from an unusually high price of $19.99. It really should have been $5 cheaper for what you get. Not worth getting in my opinion, at least not at this price, since we already got Elsa in much better sets. 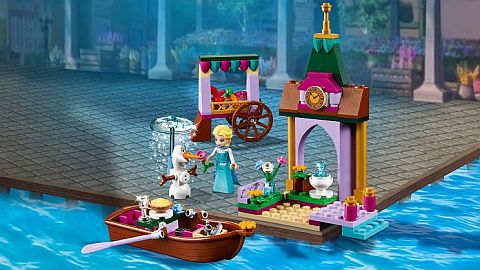 As you can see, the small sets are mostly lackluster and/or too expensive, so let’s see what we got in the bigger sets category. LEGO released three new larger LEGO Disney sets; the #41152 LEGO Disney Sleeping Beauty’s Fairytale Castle, the #41153 LEGO Disney Ariel’s Royal Celebration Boat, and the #41154 LEGO Disney Cinderella’s Dream Castle. An interesting building feature of the new LEGO Disney sets is called “modularity”, which means your can easily build, play, swap and mix out sections and characters, playing out whatever story you or your child can imagine. This feature is particularly prominent in the larger sets. 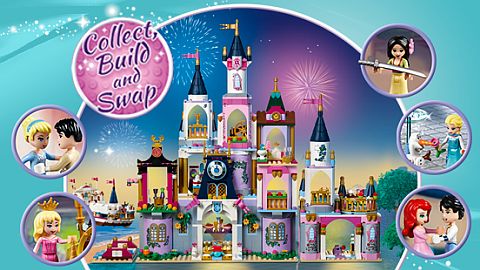 It’s nice to see that Sleeping Beauty is finally getting her own castle! The #41152 LEGO Disney Sleeping Beauty’s Fairytale Castle comes with a modular design with sections and furniture pieces that can be swapped out and rearranged. There’s a bedroom, a spinning wheel, a vanity, a birthday cake, and lots of accessories. Maleficent gets her own lair where she can come up with her evil plots. The set also includes Aurora and Maleficent mini-doll figures, plus an adorable good fairy. The overall size of the castle is 11” (29cm) high, 4” (12cm) wide and 2” (6cm) deep, so pretty substantial. The piece-count is 322, and the price is $39.99. Overall, decent castle, good play-features, and nice mini-dolls. The price is inflated – as usual with Disney sets – but is not too bad here for what you get. 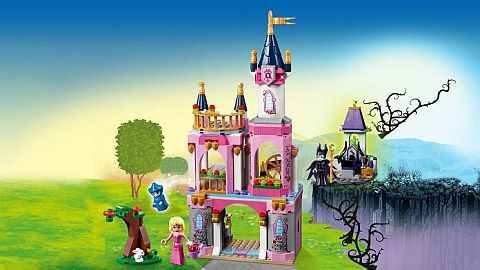 Ariel already got a number of great LEGO sets, including the #41052 LEGO Disney Ariel’s Magical Kiss (where Ariel and the prince first meet), the beautiful #41063 LEGO Ariel’s Undersea Palace, the #41145 LEGO Disney Ariel and the Magical Spell (where Ariel gets her human legs with the help of Ursula), and now here we are, on the #41153 LEGO Disney Ariel’s Royal Celebration Boat. In the original Little Mermaid story, this is a heartbreaking scene, which Disney replaced with a more happy ending. Here, there is only celebration, fireworks, kisses, and handsome Prince Eric and beautiful Ariel living together happily ever after. The boat measures over 6” (16cm) high, 9” (23cm) long and 4” (11cm) wide, and comes with interchangeable sections and accessories. I don’t think it’s as nice as the LEGO Elves boats, but it is still lovely. The piece-count is 380, and the price is $49.99. Available at LEGO retailers and at the LEGO Disney section of the Online LEGO Shop. 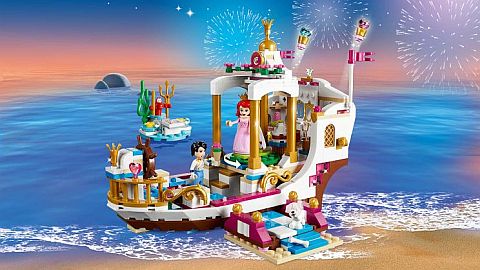 The #41154 LEGO Disney Cinderella’s Dream Castle is the second castle we got for Cinderella so far, after the #41055 LEGO Disney Cinderella’s Romantic Castle from 2014. I can’t really make up my mind which one I like better, as both castles look really nice. The major difference is that the new castle introduces dark-blue as a prominent color, which gives the castle a slightly more mature look. Both castles have an asymmetrical layout, which I think is fantastic. You get lots of modular sections, tons of accessories, and fun play-features. The overall size of the castle is 13” (34cm) high, 9” (25cm) wide and 4” (12cm) deep. That’s quite large, and plenty of room to play inside. The price for both the older and newer castle is $69.99. It’s nice to see that the price didn’t increase, so if you didn’t get the first castle, the new one is a good choice. 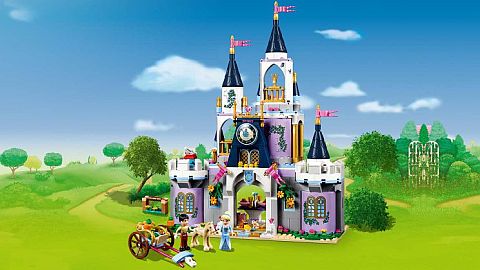 As you can see, there are some plusses and minuses with the 2018 LEGO Disney sets. I would say that the larger sets are the best deals in terms of overall value, but you might also consider the smaller sets if you are only looking for specific characters, or a good selection of pretty accessories. Overall, LEGO Disney sets are expensive compared to LEGO Friends and LEGO Elves, so if you are not attached to Disney characters, you might consider those collections as well (LEGO Friends for a more modern setting, and LEGO Elves for fantasy). And, if you want to re-create the magic of Disney, the LEGO Disney sets are the way to go! 😀 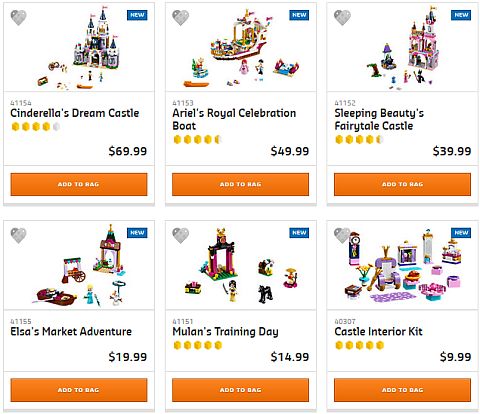 What do you think? How do you like the new LEGO Disney sets? Are you planning to get any of them? Or do you have some of them already? Feel free to share your thoughts and own review in the comment section below! 😉