Since LEGO got the license to release constructions sets based on characters and scenes from the Marvel Cinematic Universe, they have released six awesome jets; three versions of the Quinjet, two versions of the Milano, and a ship that looks much like the Milano from the upcoming Avengers: Infinity War film, referred to in LEGO’s description as The Guardians’ Ship. So, I thought it would be a good idea to look at all the Quinjets and M-ships released so far, and see how they compare. 🙂 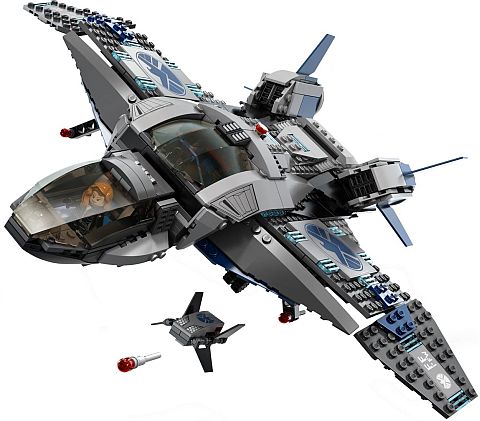 ➡ #6869 LEGO SUPER HEROES QUINJET AERIAL BATTLE: Released in 2012, the #6869 LEGO Super Heroes Quinjet Aerial Battle includes the first version of the Quinjet. This is still many LEGO Marvel fans’ favorite, due to the large size, pleasing dark-gray/dark-blue color-scheme, and really nice shaping. The Quinjet features adjustable wingtips, two opening cockpits with space for two minifigures, detachable mini-jet, four missiles, prison pod, and a rear door. The colors, LEGO pieces, and shaping used in this Quinjet also make this an excellent starter model for other type of jets you may want to build. The Quinjet measures 5″ (15cm) high, 15″ (39cm) long, and 15″ (39cm) wide. The set includes 735 pieces, and originally sold for $69.99. You can still get it for around that price on the secondary market: #6869 LEGO QUINJET ON AMAZON

➡ #76032 LEGO THE AVENGERS QUINJET CITY CHASE: While the earlier Quinjet is large and menacing, the Quinjet in the #76032 LEGO Super Heroes The Avengers Quinjet City Chase, released in 2015, appears lighter and faster. This is mostly due to the smaller size, lighter colors, and sleek profile. The Quinjet features an opening cockpit with an updated translucent-blue windscreen, four stud-shooters, opening rear hatch, opening roof, foldable wings, a secret wing compartment to launch Captain America’s bike, and a rope to attach any object to the jet. The Quinjet measures 3” (9cm) high, 10” (26cm) long, and 16” (41cm) wide. The set includes 722 pieces, and originally sold for $79.99. This set is also still available for around the original price: #76032 LEGO QUINJET ON AMAZON 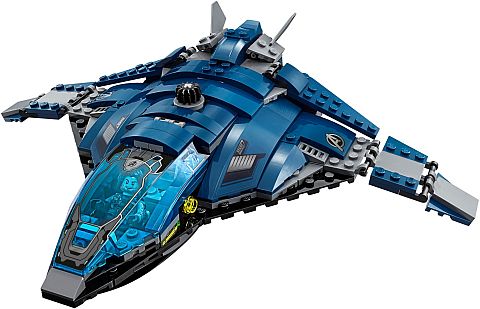 ➡ #76051 LEGO MARVEL SUPER HEROES AIRPORT BATTLE: This set includes the smallest version of the Quinjet. Released in 2016, the #76051 LEGO Super Heroes Airport Battle is a pretty substantial set with three large builds; the Quinjet, a buildable Giant Man figure, and an air traffic control tower. Because the Quinjet is not the only star in this set, it means that LEGO designers had to keep it smaller. The shaping is very similar to the second version of the Quinjet, but the colors are kept all dark. This mean little jet still includes some nice play-features; hidden stud-shooters, opening dual cockpit, foldout wings for flight and landing modes, and an opening rear hatch with a rope for a minifigure to grab onto. The Quinjet measures 3” (9cm) high 7” (20cm) long, and 12” (31cm) wide in flight mode, and 7” (19cm) wide in landing mode. The set includes 807 pieces, and originally sold for $79.99. Still available for around the original price: #76051 LEGO QUINJET ON AMAZON

In summary, I would say that you can’t go wrong with any of the three versions of the Quinjet, you just need to know what you are looking for. Whether you want something large and menacing, fast and agile, or small and compact, LEGO has a Quinjet for you. And, as I have mentioned, even if you are not a Marvel fan, all three versions of the Quinjet are excellent starter models for your own jet. My favorite is the first one, as I really like the overall shaping and the colors. But the other two are great too. Now, let’s take a look at the three M-ships… 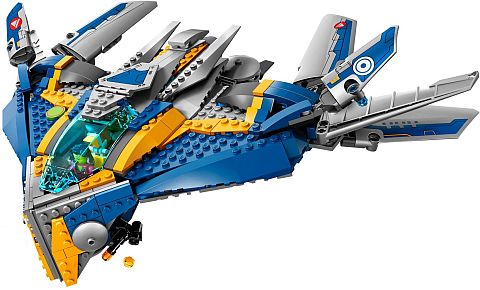 ➡ #76021 LEGO THE MILANO SPACESHIP RESCUE: Released in 2014, this was the first version of the Milano. It has such a unique shape, resembling a large bird swooping down on its prey. LEGO designers were even able to recreate the feathery look of the wings, using some large LEGO Technic elements. The Milano features an opening and removable cockpit, detailed interior with space for three minifigures, adjustable wings, two flick-fire missiles and two stud-shooters. The Milano measures 3” (10cm) high, 9” (25cm) long and 15” (40cm) wide. The set comes with 665 pieces and originally sold for $74.99. You can still find it on the secondary market for around that price: #76021 LEGO MILANO ON AMAZON 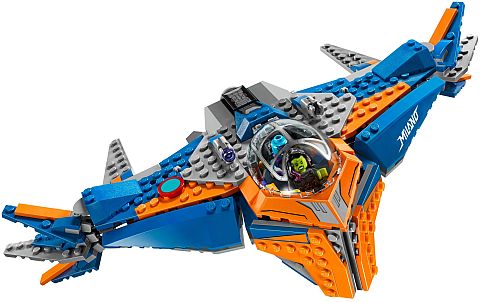 ➡ #76081 LEGO THE MILANO VS. THE ABILISK: This set was released in 2017, and includes a smaller version of the Milano. The color-scheme is changed from blue/yellow to blue/orange, and the nose (or beak) section has an even more refined look. However, the feathery wings are not as long and graceful as on the previous ship. The Milano features movable wings, opening cockpit with room for four minifigures, two stud-shooters and twin bomb-drop function. The Milano measures 3” (8cm) high, 7” (19cm) long and 14” (37cm) wide. The set includes 460 pieces, and originally sold for $49.99. Still available on the secondary market for that price or even less: #76081 LEGO MILANO ON AMAZON

➡ #76107 LEGO SUPER HEROES THANOS: ULTIMATE BATTLE: This is not the Milano, but another very similar looking M-ship. We don’t know its exact name yet, but LEGO refers to it in the set description as The Guardians’ Ship. Whatever it is, it’s the largest M-ship LEGO released to date, and it is absolutely beautiful. The birdlike gracefulness is even more refined here, and the color combination is not as contrasting as on the two previous ships, but more mature and elegant. Another unique feature of this jet is that you can make it even larger by adding the escape pod from the #76102 LEGO Super Heroes Thor’s Weapons Quest at the back. If you do get the M-ship, I highly recommend spending a little more to get the escape pod as well. It really finishes off the back and of the jet nicely. The Guardians’ Ship features an opening cockpit for the space scooter (and two minifigures sitting on the scooter), flip-up windshield, opening rear compartment with two minifigure seats, removable roof, space for the Infinity Gauntlet and stand, two stud-shooters, adjustable wings and a connection point for the escape pod. The Guardians’ Ship measures 3” (9cm) high, 8” (22cm) long and 18” (46cm) wide. The set comes with 674 pieces, and the price is $69.99. The #76102 LEGO Super Heroes Thor’s Weapons Quest with the escape pod comes with 223 pieces, and the price is $19.99. You can get both at the LEGO Marvel Super Heroes section of the Online LEGO Shop. 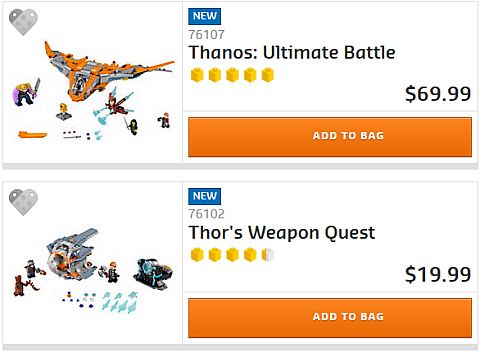 All three of the M-ships are nice, and if you prefer any of them, you should certainly go with whatever you like the most. I would say that (at least in my opinion) The Guardians’ Ship is superior to the other two. LEGO designers really got it right in terms of size, shaping, and overall design. It’s just a beautiful jet even outside of the Marvel universe. For reference, here is a rendered image of all six ships by Vaderfan2187, comparing the sizes of the six ships. Aren’t they gorgeous? 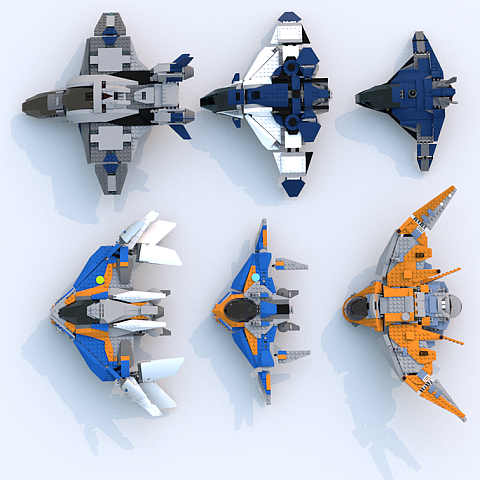 What do you think? Which one is your favorite Quinjet and your favorite M-ship? And which ones did you have a chance to build so far? What are the plusses and minuses of each ship in your opinion? Feel free to share your thoughts and own review in the comment section below! 😉