There is no doubt that the recently released #76108 LEGO Marvel Super Heroes Sanctum Sanctorum Showdown is a fantastic set. It includes a substantial building, fun play-features, nice minifigs, and it looks great on display. We have already talked about the set overall in the 2018 LEGO Marvel Super Heroes Sets Overview, however I wanted to discuss separately how the structure itself fits together with the LEGO Modular Buildings. 🙂 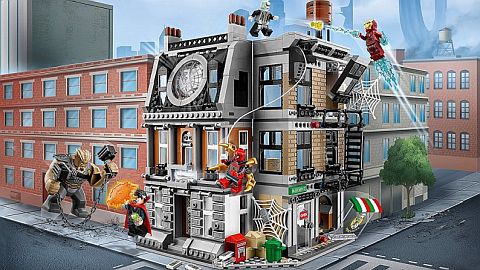 The main attraction of the set is a 3-level New York City building including the Sanctum Sanctorum, a pizzeria, and Peter Parker’s apartment. The building is colored a pleasing combination of tans and grays, with a black roof, window/door frames, and fire escapes. Both the color-scheme and the architectural details are quite realistic. 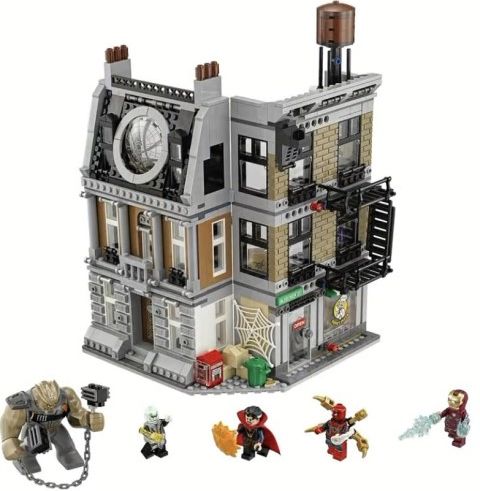 The facade of the building looks very similar to the #10243 LEGO Creator Parisian Restaurant; an entry door and couple of windows at the bottom, a central balcony and two tall windows on the second floor, and a high roof that slopes front to back with an attic apartment behind it. Even the roofline is similar, with two chimneys placed at the two ends, although the Sanctum Santorum is smaller overall. 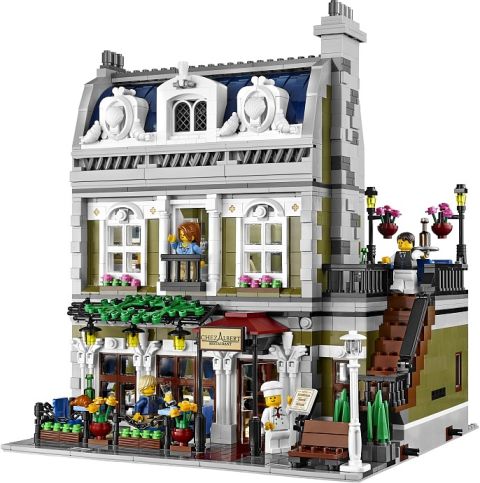 However, instead of having stacked floors like the LEGO Modular Buildings, this structure opens up like a doll-house. This type of layout has a couple of big advantages. The most obvious advantage is that the building can be easily opened up to play inside. This is much easier than having to unstack the floors of the LEGO Modular Buildings. It is also easier for people with big hands to reach inside to rearrange furniture of minifigs. 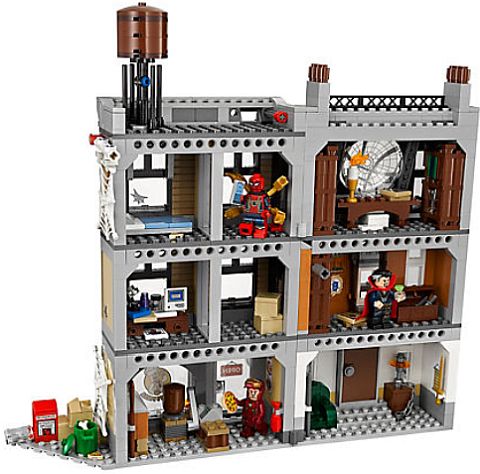 Another big advantage is that the entire building can be positioned in several different ways. You can open up the building fully to create a wider street-view with basically two buildings next to each other with an open back for play. You can also completely close the building to create one compact and enclosed structure, similar what the LEGO Modular Buildings look like. In this scenario, one leaf of the building becomes the front, and the other the back. And, you can partially open the building to create a corner structure with a 90 degree angle, or even form other angles for unusual street layouts.

In some ways, I like hinged buildings better than the stacked floors of the LEGO Modular Buildings. They both have their plusses and minuses, but in general, hinged buildings offer more options for play and display. Once you build a LEGO Modular Building, it is awkward to reach the lower floors, so, sadly, they mostly remain hidden and forgotten. On the other hand, hinged buildings work better as standalone (or at least loosely connected) structures, as opening and closing them means they need varying amount of space. However, if you permanently keep them open, you can connect them, and have a very nice street layout as well as a fully open back for play. 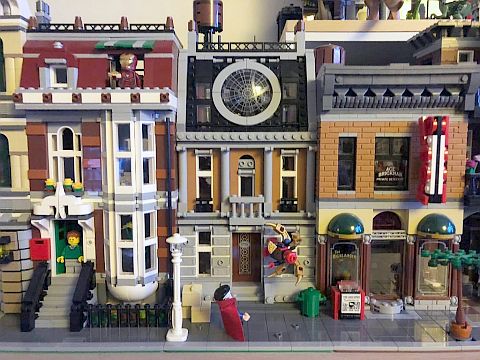 If you want to incorporate the Sanctum Sanctorum with the LEGO Modular Buildings, you basically have three options. The simplest one is to close the building fully and transfer it to a standard LEGO 16×32 stud baseplate. You would want to remove the hinges on the side, so the sidewall can lay completely flush against the other buildings in the LEGO Modular Building series. And you would probably also want to make the floors stackable. All of this is achievable with minimal effort and extra parts, as demonstrated above by LEGO fan Mabubifarti, who put the Sanctum Santorum between the #10218 LEGO Creator Pet Shop and the #10246 LEGO Creator Detective’s Office. 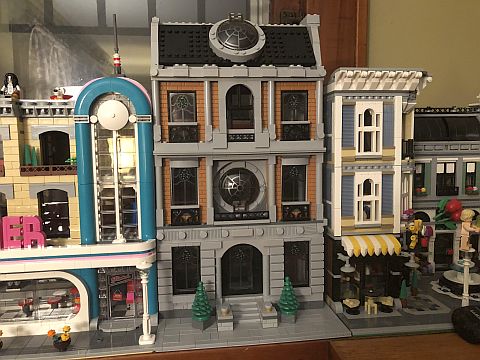 And, if you feel that the Sanctum Sanctorum is a little too small, you can also consider modifying it by making it taller and wider, and adding different decorations to the façade of the building, as demonstrated above by LegoStuff77. Another modification you might consider is to just raise the building a bit by adding a crawl space and some steps below the foundation, similar to the layout of the #10218 LEGO Creator Pet Shop. 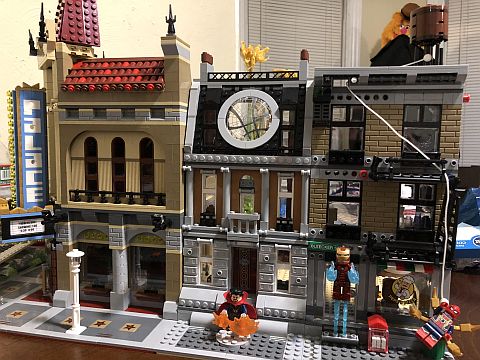 The second and the third options for displaying the Sanctum Santorum building with the Modulars involve more significant investment of time and money. You could keep the building completely open, and thus creating a 32-stud long street-view (see picture above by Soundbytes87), or you could fold the building to 90 degrees, and make it a corner structure (see picture below by dpons_). In both cases you would need to build up the back with extra parts, or you could just cheat, and keep the back of the building open. People who look at it from the front would never know. 🙄 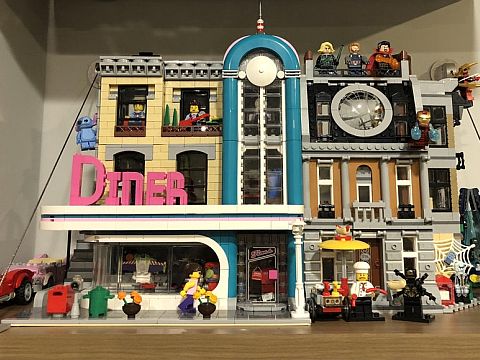 As far as the interior, the Sanctum Sanctorum features an entrance hall with an opening door, weapon rack with an axe and sword, and an armchair; library with an exploding wall function, hidden Infinity Stone element and stand, bookshelves, opening chest with 2 daggers inside and weapon rack with a staff and spear; and Doctor Strange’s top-floor office with a decorated Sanctum Sanctorum window, desk, bookshelves and buildable candlestick. Peter Parker’s apartment features an office with a desk and assorted elements including a computer, lamp and boxes, and a bedroom with a trapdoor function, exploding window function, bed and pizza element. The pizzeria features an opening door, exploding window function, pizza oven, buildable shawarma and assorted elements including a pizza, pizza peel and fire extinguisher. And the rooftop features a minifigure-launch function and water tower with winch function to send Iron Spider-Man in and out of battle on a ‘spider web string’.

How you modify the interior is totally up to you, and is not as crucial to the overall look of the building. You can keep most of the play-features, or take them off, and you can completely reorganize or replace what’s inside. But the point is that the #76108 LEGO Marvel Super Heroes Sanctum Sanctorum Showdown is clearly a good match to the LEGO Modular Buildings, as demonstrated by those who have already done it. If you are interested in the set, and inspired by the layout options discussed here, see the LEGO Marvel Super Heroes section of the Online LEGO Shop.

What do you think? Have you thought about adding the Sanctum Santorum to the LEGO Modular Buildings? How would you display it and/or modify it? Feel free to share your thoughts and own ideas in the comment section below! 😉