Troubles in the toy world & at Toys’R’Us

Based on how amazing most of the new LEGO sets and themes have been in the past few years, it appears that the LEGO Company is doing very well. However, according to their most recent financial report, not everything is awesome in the world of LEGO. In addition, the toy industry as a whole has been struggling, with both Hasbro and Mattel seeing significant downturns with no end in sight. And, there is a great possibility that Toys’R’Us – the largest toy retailer in North America – will be closing its doors. While looking at these events individually may not be the cause of alarm, all of this happening at the same time is definitely not a good sign. So, I thought it would be a good idea to discuss all of this a bit… 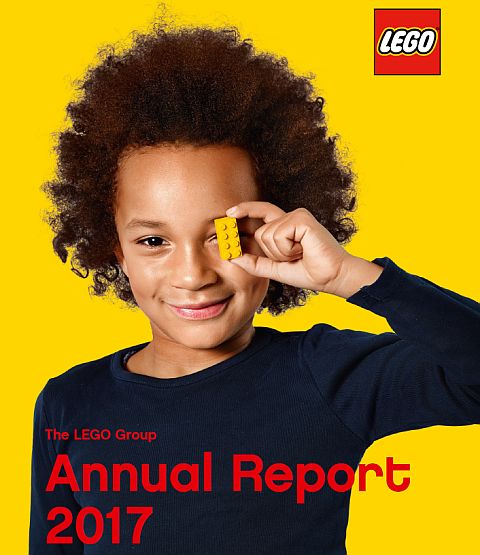 Starting with the LEGO Group, the company released its full year financial results for 2017 at the beginning of March, reporting a 7 percent decline in revenue and 17 percent decline in operating profit compared to 2016. The decline was driven in part by inventory clean-up, and the flat global consumer sales throughout the year didn’t help. Niels B. Christiansen, the LEGO Group CEO said: “2017 was a challenging year and overall we are not satisfied with the financial results. However, we ended the year in a better position. In December, consumer sales grew in seven of our twelve largest markets and we entered 2018 with healthier inventories. In 2018, we will stabilize the business and invest to build sustainable growth in the longer-term.” You can read the full financial report here: LEGO GROUP 2017 FINANCIAL REPORT 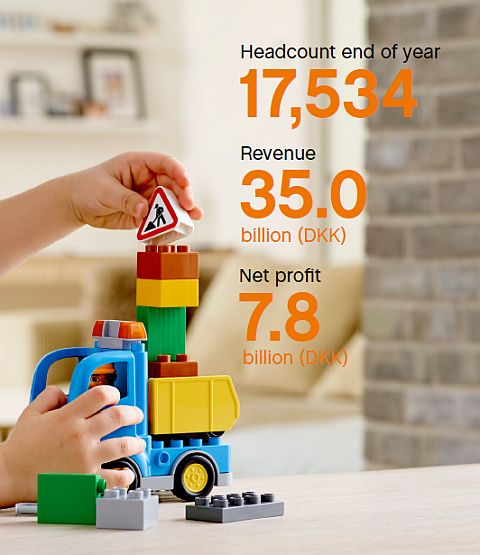 Having said that, LEGO is still in amazing shape, with a net profit of DKK 7.8 billion in 2017 (compared to DKK 9.4 billion in 2016). They have had significant growth in the past decade, and The LEGO Movie (released in 2014) gave them a nice additional boost. After all that growth, a bit of pull-back is natural, even expected, so what is there to worry about? The worry comes from looking at the current condition of the toy industry as a whole. Companies don’t exist in isolation, and seeing the major decline of toy manufacturers and retailers, it makes a lot of sense for LEGO’s management to look ahead to the future with caution and careful preparation. 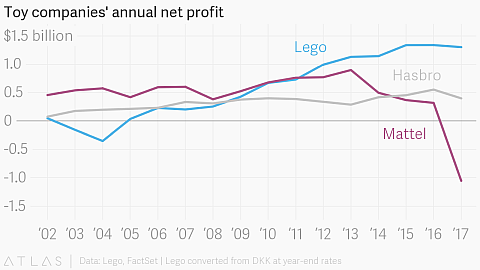 Just take a look at the chart above, (source) comparing the annual net profits of the big three toy manufacturers: LEGO, Hasbro, and Mattel. While LEGO has been happily climbing the ladder, with a little bit of flat-lining in the past couple of years, Hasbro has been going flat for almost the entire length the chart represents, and Mattel took a significant nosedive into negative numbers. Hasbro is one of the three big toy makers in the world, with brands like Monopoly, G.I. Joe, Furby, Transformers, Nerf, My Little Pony, Play-Doh, Lincoln Logs, and Kre-O. Mattel is another one of the big three, with brands including Fisher-Price, Barbie, Monster High, Hot Wheels and Matchbox, Masters of the Universe, American Girl, and WWE. In addition, Mattel purchased Mega Brands (Mega Bloks/Mega Construx) in 2014 to compete with LEGO in the construction toy market. Both Hasbro and Mattel are publicly traded, while LEGO is a family-owned business.

Hasbro and Mattel have been trying to stay afloat in the toy business by buying smaller toy companies – some of which turn out to be winners, and others losers. Hasbro even attempted to buy Mattel last year, which Mattel rejected. In addition, Mattel’s idea to compete with LEGO using the Mega Brand – at least so far – didn’t turn out as planned. In their year-end financial report, Mattel states that gross sales in their construction toy lines were significantly down, primarily due to declines in Mega’s licensed and preschool products. I find this particularly interesting because there is a great demand for Mega’s collector’s lines worldwide, but for some reason, Mattel is unable or unwilling to work out distribution. Mega fans have been baffled and greatly frustrated by this. If you thought LEGO’s distribution is sometimes lacking, and LEGO prices on the secondary market are too high, try buying some Mega Construx collector’s sets. The experience will make you cry. You can read Hasbro’s financial report here: HASBRO 2017 FINANCIAL REPORT, and Mattel’s here: MATTEL 2017 FINANCIAL REPORT 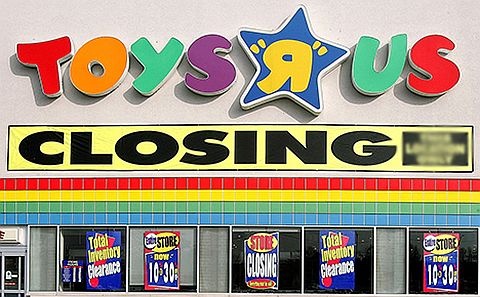 And to add to the misfortune of the toy industry, Toys’R’Us, the only large toy retailer still remaining in North America, is about to close its doors. The toy chain’s U.S. division entered Chapter 11 bankruptcy in the fall of last year, planning to restructure its business model to come out leaner and more manageable. However, it seems it was already too late for such a plan to work. Toys’R’Us operates around 800 stores in the U.S., and they have been in the process to close 180 locations, but now it seems that all U.S. locations will be shut down as they prepare plans to liquidate their operation. In addition, there are also talks about closing stores in the U.K. and Canada. Here are some resources to get a full picture:

The closing of Toys’R’Us stores is a huge blow to the entire industry. While Toys’R’Us isn’t the largest seller of toys (Wal-Mart is), it still accounted for a good percentage of U.S. toy revenue. In addition, Wal-Mart, Target, and other big box retailers only carry a limited selection of the most reliable sellers, while Toys’R’Us also stocked all kinds of unusual toys and interesting toy brands you couldn’t find anywhere else. All those brands are now in big trouble with their main outlet gone. Both Hasbro and Mattel had a significant drop in their stock prices directly related to the troubles of Toys’R’Us, and we will likely see a number of toy manufacturers going out of business.

The demise of Toys’R’Us is the result of a combination of huge debt, lack of innovation, and competitors with more aggressive prices. It has been common for people to go to Toys’R’Us to check out interesting new toys, then hop online and buy them for cheaper. So people are still buying toys, aren’t they? They will just have to go somewhere else to get them, and toy manufacturers will have to find new outlets to reach their fans.

But there is something bigger that’s troubling the toy industry as a whole; digital toys taking over kids’ interests. It’s not that kids are not playing. It’s just that they find digital games more interesting. And kids are not necessarily glued to the screen full time either. They game for fun, and they play sports for letting out their energy – not an unhealthy combination overall. Having fewer toys lying around also keeps parents happy, and physical toys falling out of favor is better for the environment.

So, when looking at the whole picture – all three big toy manufacturers seeing slumping sales, the largest toy retailer going out of business, and physical toys taking over by digital games – it makes sense that LEGO’s management is concerned. It also makes more sense why LEGO has been trying to break into the digital game industry, in spite of failing over and over again. And why their eyes are on Asia – a new market with an increasing population with disposable income, and an eagerness to experience luxury items like toys. Whoever can connect with the children of today in both old and emerging markets will win the race, while all others will fall by the wayside. The toy industry is not as fun and games as we may have imagined…

What do you think of all of this? How do you view LEGO’s financial report, the struggles of the toy industry, and the demise of Toys’R’Us? Would love to hear your opinions on this, so feel free to share your thoughts in the comment section below! 😉