Before looking at the unique building techniques in the #10260 LEGO Creator Downtown Diner, I just wanted to briefly address the biggest change in this set compared to the previous LEGO Modular Buildings; the minifigure faces are more detailed, instead of just being simple smiley faces. Personally, I like the more expressive facial features. I wouldn’t want to give up my singing Elvis, that’s for sure. However, if you are a traditionalist, and would prefer simple facial expressions, you can give LEGO’s customer service a call, and purchase the smiley heads separately. The element ID number is #9336, and the cost is around $0.28 per head, plus tax and $2.95 shipping. Now let’s talk about the building techniques! 🙂

Both the official set description and the designer-video refers to the style of the building as Art Deco, or more specifically, a later version of Art Deco called Streamline Moderne. However, the LEGO Creator Downtown Diner is actually more of a combination of styles. Early Art Deco featured a monolithic look with lots of repeating geometric shapes – often with hard, sharp angles. It wasn’t until Streamline Moderne that we started seeing rounded shapes, like curved windows, porthole windows, and a more horizontal approach. 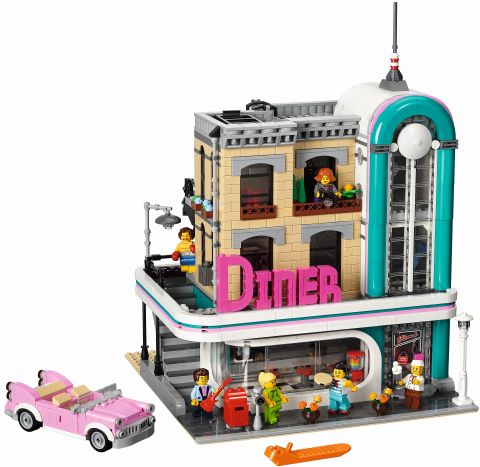 Besides the Streamline Moderne influence in the LEGO Creator Downtown Diner, there is also reference to Googie architecture. This is the style that you see in the typical 1950s diners, with oversized signs (like the “Diner” sign in this set). Large pylons that sort of look like the side of a giant jukebox are also typical for this style (as represented in the curved tower section of the LEGO Creator Downtown Diner). All of these unusual shapes were meant to capture the idea of speed and the atomic age, and what people envisioned the future might look like.

In the LEGO Creator Downtown Diner, Streamline Moderne and Googie are wrapped around a more traditional building, adding another architectural style to the mix. Some LEGO fans view this as perhaps an older building that got renovated with a more modern façade.

So, what does it take to design your own Streamline Moderne/Googie building? Start off by concentrating on having distinct shapes. Next, make sure to limit the number of sharp corners in these shapes, and focus on curves. Your style choices should be a bit bold, like having large pylons, but don’t overdo it. You want to stay as sleek as possible. It also helps to look at real-life examples of these styles. A good place to begin is on these Wikipedia pages: Art Deco, Streamline Moderne, and Googie.

While we are on the topic of architecture, I want to point out a second architectural technique used by the designers of the LEGO Creator Downtown Diner, called abstraction. Abstraction is where you take an object, like a jukebox, and use it as a starting point for your building. The process is usually done like this; start with an object, and determine what aspects of this object are most important. For instance, the overall shape is usually kept, along with maybe a few distinct attributes. Then, the design is refined to add in necessary building aspects like doors and windows. This is also when the shape of the original object that provided inspiration may get expanded or stretched to help serve the needs of the building. After this, you give it another pass to clean up the model, and maybe tie it together with an architectural style, like we discussed earlier. The end result will, hopefully, be something that is rather iconic and unique. 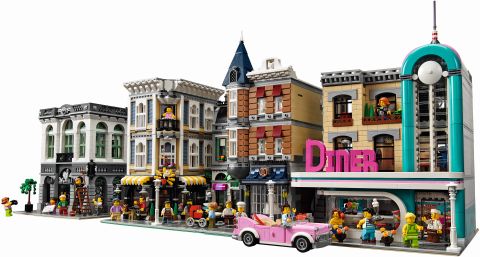 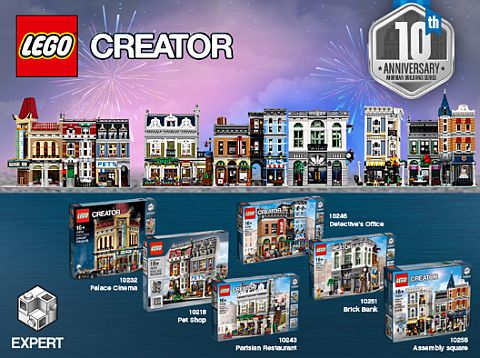 Learning how to build all these different font types in so many different ways is very inspiring and educational. I even used these examples to build my own signs over the years. The important aspect of building signs is, surprisingly, not “How do I build words?” but rather, “How can I make a consistent font?” If you can figure out the second question then you can probably puzzle out how to make it all work.

The best way to start is to first figure out what the word is you want to build. If you already have a particular layout in mind, this can provide a way to judge the amount of space you have to work with. For instance, having roughly eight studs worth of space will probably rule out any long words. I often like to figure out what my constraints are even before choosing a word to build. 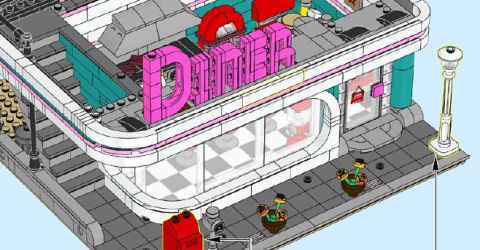 In the case of the sign on the LEGO Creator Downtown Diner, LEGO designers used the architectural style of the building itself to direct what the letters would be like; using strong curves. They also decided that the font would all look the same, but capitals would be slightly larger. You can see this by looking at the letter “I” since that is definitely a capital style, but clearly, it’s not used as a capital due to its smaller size.

If you’re still not sure how you can choose a font, then try this. Go to a free font site and look up fonts with words that look like what you want to build. So, a train station might use words like “tracks” and “railroad”, and a BBQ place might use words like “grilled” or burnt.” You’ll find that many fonts have very straightforward names like that. After finding a font, study it, and see if you can make it out of LEGO parts. And that’s pretty much it. Sure, you’ll likely make adjustments later, but as long as you have the font designed right, then most of the work is done.

There are many pieces in the LEGO parts library that have extra space available in their nooks and crannies. I’m not talking about pieces with holes that you can stick a bar through, rather I’m referring to less obvious spaces like the underside of arches. These spaces might not form stable and traditional connections with other pieces, but they can still be useful. The LEGO Ideas Downtown Diner gives us three examples of such connections. 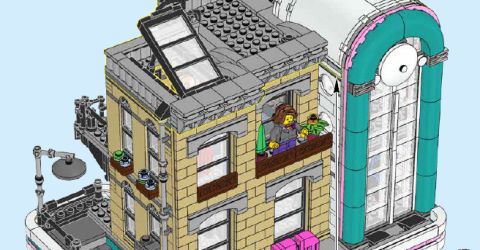 The first use I want to point out is in the light-gray trim right below the roofline. It is made of a series of modified tiles with bars that are placed upside down, framing finger hinges. What you get is a sophisticated looking design, when in reality all that’s happening is that the negative space of the modified tile is being used to frame another piece. The combination of the two elements tricks your brain into thinking that whatever you are looking at is very complex. Window frames (without glass or shutters) are particularly great for this purpose, as they have a natural negative space that can frame other elements. 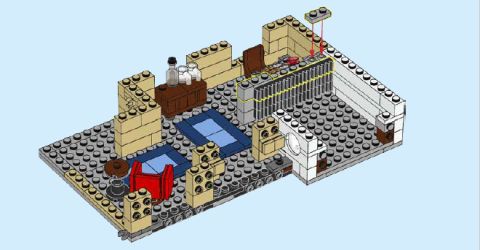 The next use of negative space is all about accommodating. For an example, take a look at the inverted arches for the porthole windows. The arch bricks use corner panels of two types to essentially accommodate an unusual building situation. When building the windows, it was necessary to have an upside-down arch brick, however, there is not a lot of room to make this happen. So the compromise is that if you can’t build it, can you at least accommodate it? In this case, the panels could do the latter. They are there to support the arch vertically while fitting around some studs that are kind of in the way. It does this by utilizing the panels’ negative space. It is important to note that these sections aren’t attached by any normal connection. They are simply built around and held in place by the geometry of the parts around it. 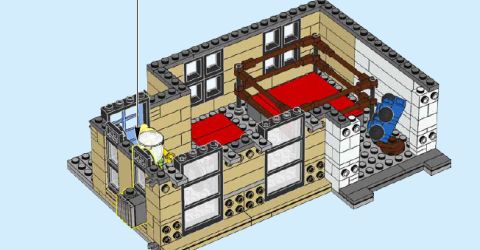 This brings me to the final example of using negative space, which can also be seen with the usage of the arches in this set. The inside of arch bricks is generally hollow, with enough space for just about one and a half plates, or the width of one stud. Although plates can stick inside the arches with a wiggle, the arches natural geometry works well to lock in the parts from falling out. Both the tall skinny windows of the left side of the tan building and the porthole windows use this technique in a very effective way.

Whenever you plan to design an intricately detailed building, it helps to have an overall style in mind. This helps to put your creation in the time and place you desire. Remember, anything that gives context to your builds will always be your friend on your path to becoming a master builder.

As for abstraction, I believe I mentioned it when we talked about the #21050 LEGO Architecture Studio set since it is one of the first things covered in the book that comes with it. The important takeaway here is that there is a difference between architectural technique and architectural style. The first usually tells us how to make something, while the latter is about how that thing should look. Another way to remember is that style is made up of many techniques. Abstraction is just one of those quasi techniques that border on style.

And, nothing says style like a good font. In fact, having a name attached to your building gives your model character. With that said, designing a font out of LEGO bricks is not easy. Many of your first attempts may result in finding out your letters don’t fit the space you have for them. So the best piece of advice I can give is to first figure out how much space you have to work with, and then see if you can build anything within that limitation.

Finally, understand that your building limitations are more of a case of whether or not something fits, rather than if there are reliable connection-points. If you learn nothing else from the LEGO Creator Downtown Diner, it should be that you can have many free-floating elements that make up your model. Sure, this doesn’t lead to the best stability, but it can open up a whole new world of possible designs with pieces you may already have in your collection. 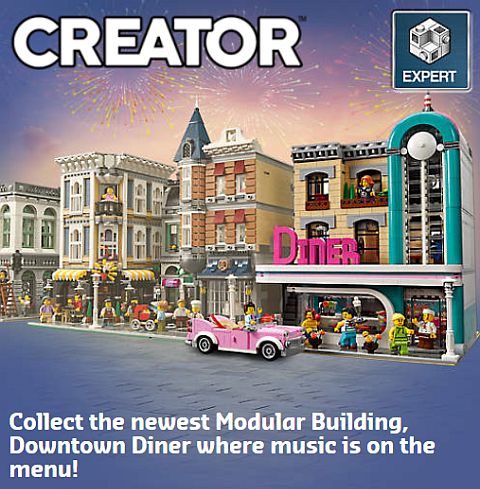 What do you think? How do you like the #10260 LEGO Creator Downtown Diner? Did you build it yet? And what do you think of the building techniques we discussed here? Are there any other interesting techniques you found in the set? Feel free to share your thoughts and own review in the comment section below! 😉