For April Fools’ Day this year, LEGO posted a photo of a “revolutionary brick sorting vacuum”, called VacuSort. This handsome little machine supposed to be able to sort LEGO pieces by shape and color, and even separate out dust. The VacuSort was meant to be a funny joke in response to parents always complaining about stepping on LEGO bricks, and the constant challenge of sorting and organizing LEGO pieces (something that’s an issue not just for kids and parents, but also older LEGO fans and even professional LEGO designers). 🙂 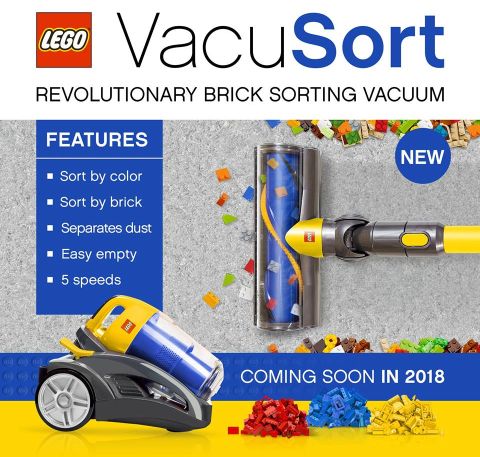 The VacuSort was shared over 43,000 times on Facebook, with 72,000 likes, and close to 10,000 comments. It obviously resonated with people not just as a fun joke, but also something that they really want and need. In fact, most of the responses are requesting LEGO to make the VacuSort for real. LEGO got a similar enthusiastic response on Twitter.

LEGO fans have been experimenting with all kinds of LEGO sorting machines. They are usually elaborate and large assembly-line type structures, made of LEGO Technic elements and LEGO Mindstorms robotics. They are able to separate pieces by shape, size, and color, based on how they were programmed. You will find a number of examples of such creations on YouTube, such as the one below.

A simpler, but still very large and complex example of a LEGO sorting machine comes in the #42055 LEGO Technic Bucket Wheel Excavator as the alternate B-model. The Mobile Aggregate Processing Plant (as it’s called) is able to separate larger LEGO pieces from smaller ones with a fairly good accuracy. This is a super impressive LEGO model in itself, however not very practical for actual sorting due to it’s limited abilities, large size, and very slow operation.

Perhaps one day, LEGO, or another company will make the VacuSort a reality. It was clear from the response to their April Fools’ post that the demand is very much there. Maybe they do have something in mind, and they were just testing to see how people would like it… we can dream…

What do you think? Would you like to have a VacuSort that can vacuum up and sort your LEGO bricks? Do you think it’s a possibility? How would it work, and what would it look like? Feel free to share your thoughts and own ideas in the comment section below! 😉