We have been discussing many of the recently released large sets, so I thought it would be a good idea to focus on a smaller set for a change. Just because a set is small, it doesn’t mean it can’t contain interesting building techniques we can learn from. I recently put together the #70918 LEGO Batman Movie Bat-Dune Buggy – a small set with only 198 pieces and a price of $19.99 – which is what we will talk about today. 🙂

The last LEGO dune buggy I built was back in the early 90s, so I was quite unprepared for the complexity of this newer set. This thing is built like a tank! There are reinforced beams, and plenty of elements that lock in the vertical as well as the horizontal. In my opinion, the vehicle is almost over designed. This is not necessarily a bad thing, as it provides a more rewarding building experience, and plenty of techniques to talk about. So let’s begin!

With the use of rubber bands, it’s pretty easy to make a resilient suspension for a LEGO vehicle. One of my favorite examples is in the #70906 LEGO Batman Movie The Joker Notorious Lowrider, which we discussed here. In our previous discussion we talked about the suspension extensively, so what I want to cover this time is the best way to deal with suspension in a vehicle that has tires on multiple levels. 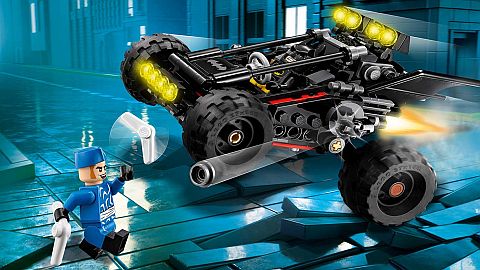 In the case of The LEGO Batman Movie Bat-Dune Buggy, the back wheels are set much further out and higher up than the wheels at the front. When you have a situation like this, and want to add a bouncy suspension, it is best to ignore the front wheels (unless they are the ones higher) and focus on the back. The reason for this has to do with the functionality of the suspension. A normal suspension’s job is to absorb impact and not have the body of the vehicle scrape against the ground. In the case of a multi-level wheel setup, you have the most room to work with on the wheels farthest from the body. 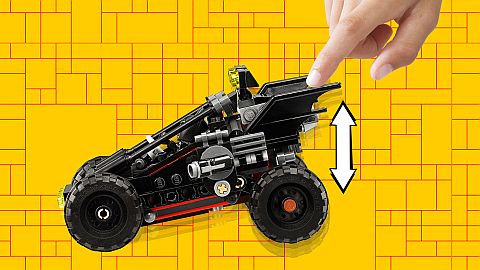 Another trick used in this set is that the back wheels are connected with a single axle. This doesn’t actually do anything directly for the suspension and the wheels could have been easily independent of one another. What it does, however, is that this way the rubber bands share the strain of holding up the back end of the vehicle. The end result is that the rubber bands will last longer compared to using them separately. 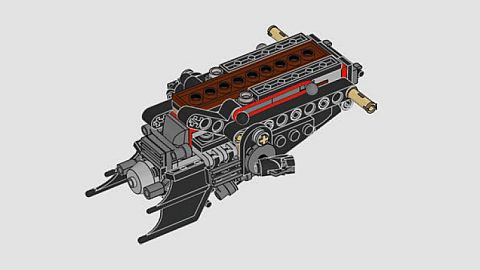 One other thing to note is that multi-level suspension is usually used when the tires are the same size, and not when larger wheels are combined with smaller ones. This is by no means a hard rule that must be followed, rather it is most likely done to judge the math better. For example, different sized wheels may bring the suspension lower than you intended or in some cases not low enough. By reducing this variable, you can more reliably build a suspension that acts the way you want.

When we discussed the #76105 LEGO Super Heroes Hulkbuster: Ultron Edition (see here), I mentioned a decorative technique called wrapping. This is where you take relatively small elements and wrap their hinge-like connections around an object to give it a slick design. The Batman Movie Bat-Dune Buggy uses this technique in two places, but with larger elements. 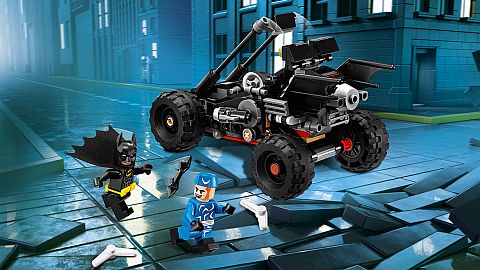 One of the examples is the bat fins at the back of the buggy. They are first connected into pin holes and then simply left to their own devices. The second example is the long bars to the right and left of the driver. They are connected at the front and then tilted back until they rest against the back of the vehicle.

The essential ingredient of this technique is that not only do you need a connection strong enough to hold a large piece in place, but you also have to device rest points for your element to tilt to. In the case of the fins, there are a couple of plates with bars underneath that prevent the fins from dropping too low. And soon after you attach the fins, you also add a 2×2 plate with two bars which subtly lock the fins in place. 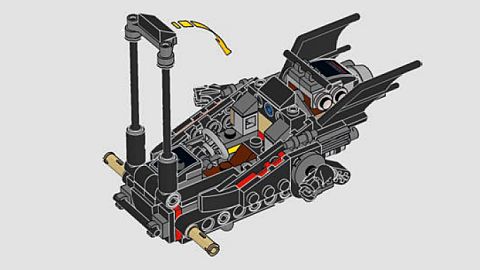 In the case of the front bars, there is an empty space for the modified plate that connects the two bars together to fit inside. And, thanks to some clever slopes on this modified plate, everything looks complete when the bars are fully tilted. Then we add some lights at the top, which actually locks the bars in place. This additional step of locking in place is the only difference from the much smaller wrapping technique. All in all, this is a great way to build roofs and add dramatic angles to any of your creations.

Keep in mind that multi-level suspensions don’t always need to be on rolling vehicles. This technique can be applied to anything you want to have a resilient springy quality to. For instance, if you create a large spider and want the legs to spring up, letting the spider jump, this might be the technique for you. This is also a good technique for when you want something to reset its original position. Spice them into your own models and create something dynamic.

As for upscaling wrapping into tilting, I recommend trying out any of the techniques we talk about in this Brick Breakdown series at different scales. Tilting is just what happens when the pieces you use to wrap are just too large to hug the surface of whatever you are bending it over. Playing with a technique at different scales can give you interesting new options, and you will also quickly discover further abilities and/or shortcomings of the technique. 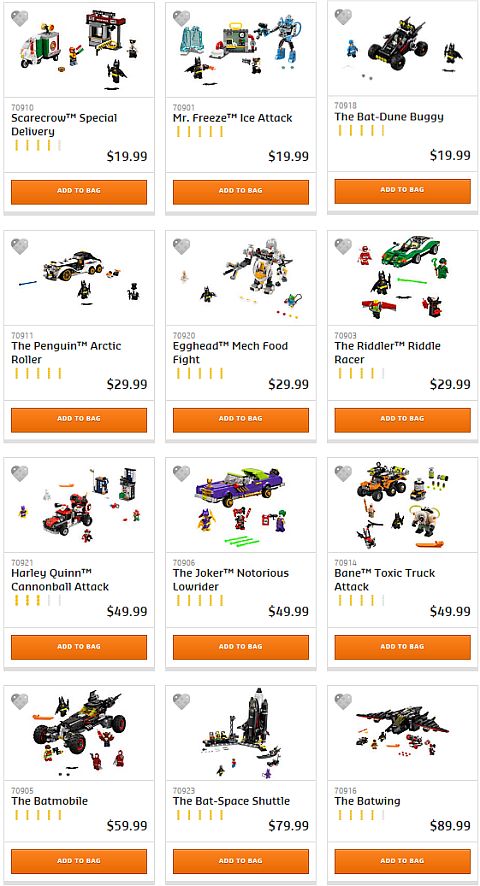 What do you think? Do you pay attention to interesting building techniques in smaller LEGO sets? What discoveries have you made that you found useful in your own creations? Feel free to share your thoughts and discuss in the comment section below! 😉