I thought it would be a good idea to do a little bit of round-up on LEGO ideas projects. We are still awaiting news on which LEGO Ideas project (if any) will be approved from the last batch. This includes three other houses from RobenAnne in the same style as the #21310 LEGO Ideas Old Fishing Store that was released last year. Other projects currently under review are the Pop-Up Book by JKBrickworks, the Jaguar E-Type Roadster by Ozzyeatingbats, the Christmas Story House by twrt0es, and the RuPaul’s Brick Race by SeeMarkGeek. You can see them all at the In Review section of the LEGO Ideas platform. 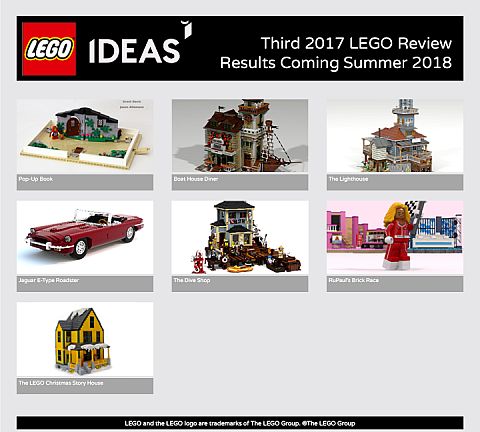 Waiting for the next review period, a large number of projects already achieved the required 10,000 votes. This includes the Modular Arcade by Astronaut Avila, the Treehouse by KevinTreeHouse, the SR-71A The Final Flight by JustOneMoreBrick, The Flintstones by AndrewClark2, Stitch by Legohaulic, Embraer A-29 Super Tucano by Alex Paschoaletto, the Mystery Science Theatre by JMaster, the Acclamator Class Assault Ship by Lucero, and the Amelia Earhart project by Alatariel. You can see them all at the Achieved Support section of the LEGO Ideas platform. 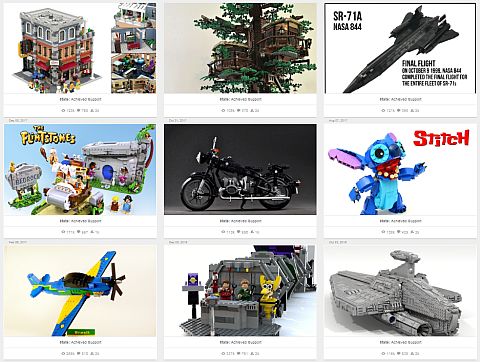 There are also some great projects very close to 10k votes. Some of my favorites are the Fiat 500 F by saabfan, the Dinosaur Fossil Skeletons collection by Mukkinn, the Chemical Plant by Ymarilego, the Food Stand Diners by FrostBricks, and the Big Steam Tractor by Mr_Kleinstein. There are other projects close to 10k votes as well, so make sure you check them out at the Gathering Support section of the LEGO Ideas platform. Please note that these projects still need support, so if you like any of them, don’t forget to cast your vote. 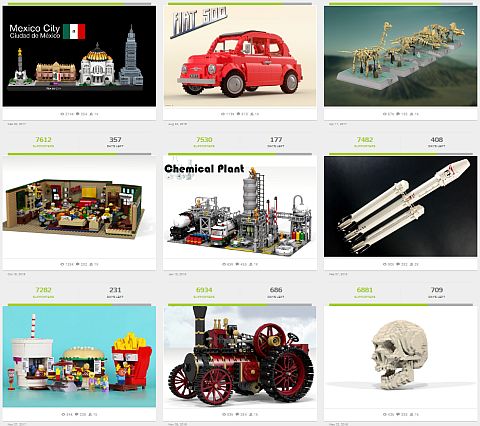 A new project that was recently posted by JKBrickworks and already gathered quite a bit of support is titled the Pursuit of Flight. This small kinetic sculpture is designed to celebrate the wonder of flight. The two planes tilt as they move from side to side, giving the illusion of flying gracefully through the air. Jason from JKBrickworks writes: “For a while now, I’ve been thinking of building smaller LEGO sculptures that still exhibit interesting and unique movement, and one theme I wanted to explore was flight. This model features a micro scaled Sopwith Camel and Fokker Dr.1 moving from side to side, tilting as they do. I think it gives a pretty good impression of the planes soaring over the countryside below, with the one in the back chasing the one in the front” The model is only around 400 pieces, and can be easily customized to feature different planes, birds or even space ships flying over different environments.” You can see it in action in the video below, along with explanation of the mechanism that controls it. If you like this project, you can vote for it at this LEGO Ideas page.

Another recent project that is quickly gathering support is the Clockwork Aquarium by msjmiley. This is an ingenious little aquarium with fish that “swim” around the perimeter of the tank, a crab that jumps, and a starfish that spins as the fish pass by. This all happens by turning a crank which operates a smooth and robust mechanism built into the cabinet. And just like with the previous project, the various elements can be switched out to change the theme to, for example, SpongeBob or Nemo. You can learn more about this project and give your vote at its LEGO Ideas page.

LEGO Ideas is an excellent platform for LEGO fans to submit their own ideas for possible future LEGO sets. In addition to listing your own projects, you can also support the projects that you really like by other LEGO fans. Creativity, innovation, cooperation, and networking are all integral part of bringing great LEGO Ideas projects to life, so make sure you visit the platform and participate. It only takes a little bit of your time to support projects, give some feedback, and encourage others to vote as well. To see the currently available LEGO sets that were originally submitted by LEGO fans, visit the LEGO Ideas section of the Online LEGO Shop. 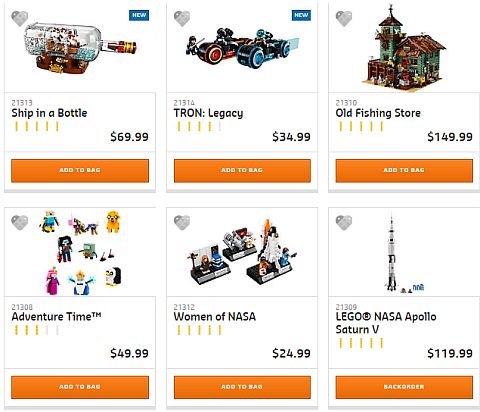 What do you think? Which LEGO Ideas projects would you like to see become official LEGO sets? Are there any projects we didn’t mention here that you would like to see getting more votes? Feel free to share your own favorite picks in the comment section below! 😉

Next post: LEGO contests for every interest and style!