When we talked about the 2018 LEGO Friends collection that was released earlier this year (see: 2018 LEGO Friends Sets with Clashing Colors), we discussed how some LEGO fans felt that the designs and color combinations of several of the new sets were a bit too garish – even for LEGO Friends. While this made some people shy away from the sets, others embraced the gaudy designs and colors enthusiastically and even took them to new levels. One of the best 2018 LEGO Friends set modification I have seen is by LEGO fan Suzanne Eaton, who turned the #41340 LEGO Friends Friendship House into an awesome space rocket! 🙂 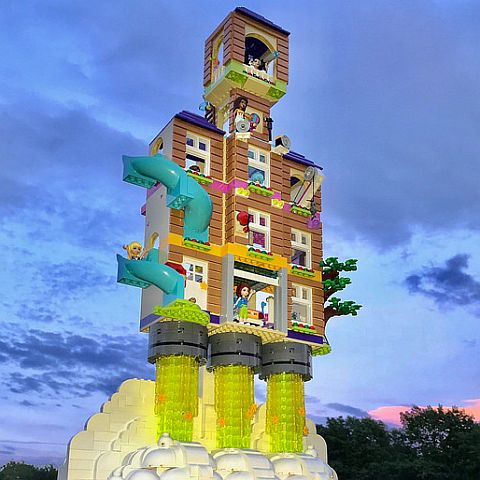 The #41340 LEGO Friends Friendship House was originally imagined by LEGO designers to be an old 4-story fire station that the girls turned into their headquarters. The building itself has a pretty simple design and muted colors, but lots of interesting multi-level space. The girls redecorated the whole building with their own colors and ideas, and also kept some of the original features like the fireman’s pole and working pulley system. There is a garage, kitchen, living area, bedroom, roof terrace, performance terrace, side balcony with barbecue, a slide, plus a friendship tree with swing and a bicycle with trailer. Very fun set overall, and a great hangout place for the five friends and their guests! 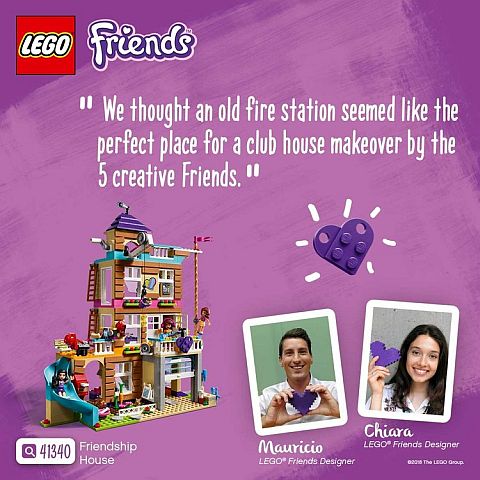 Suzanne shares that after watching the test launch of SpaceX’s Falcon Heavy earlier this year, she got inspired to rebuild the #41340 LEGO Friends Friendship House in the shape of the Falcon Heavy. She writes on her flickr page that for the concept of the model she channeled the LEGO Friends character, Olivia. Olivia is known for being into science, and building robots, rockets, and other interesting projects. So, it made sense that she would be the one that would think about turning the old fire station turned friendship house into a rocket ship! Suzanne writes “I like to think this whole model is happening inside Olivia’s imagination…”

Suzanne writes that she started by sketching out how the Friendship House may be reconfigured to mimic the Falcon Heavy’s triple booster design. Initially, she added an elaborate heart-shaped rainbow to mount behind the central tower, but she later scrapped this idea due to the design being too distracting and fragile. 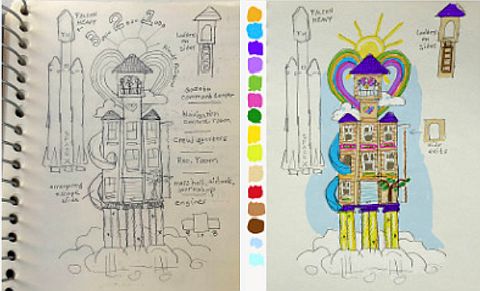 The interior is kept pretty much as close to the original as possible, with only a hot tub and swing missing. Some of the features got expanded (such as the slide, which is now triple length), and the living spaces got slightly reconfigured to accommodate whatever the girls needed for launching into space and intergalactic travel. 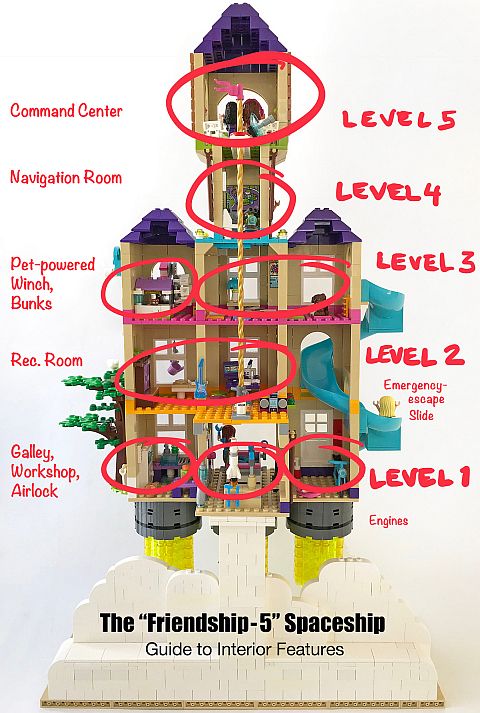 The front door opens into a two-story atrium, which Suzanne imagines to be the airlock in the spaceship, where the girls can take off their space helmets and other gear. The crew can move around between floors using the fireman’s pole from the original set. The crew’s quarters are on the third floor, and the navigation room is on the fourth floor, with Olivia’s robot Zobo plotting their next course. The running hamster wheel from the original set was moved upstairs and connected to the winch. This way, Rumble the hamster can help power the lifting of payloads. 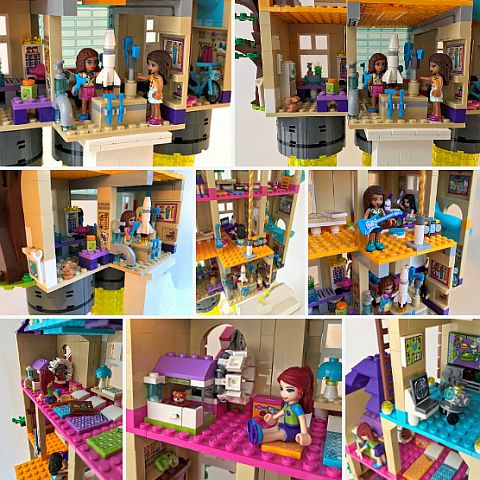 To build the Friendship 5 rocket, Suzanne combined parts from three copies of the #41340 LEGO Friends Friendship House, as well as parts from her own collection (mostly for the smoke clouds, flames, and engine base). She initially wanted to make the clouds bigger, but it was getting too expensive to finish the project. After trying different solutions, she settled for a fairly simple design. I really like the sparks made with flowers pieces! 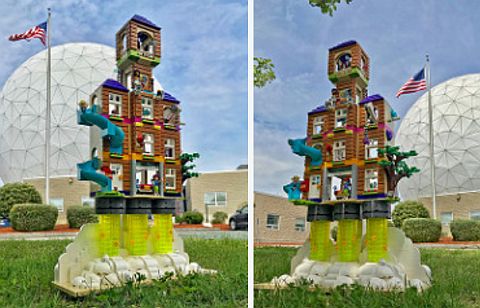 To give the Friendship 5 rocket a proper background, Suzanne took the whole model over to a radio telescope at MIT’s Haystack Observatory, just outside of Boston. If you would like to see more interior and exterior pictures of the project, check out Suzanne’s flickr gallery. And I also wanted to thank Susan from FriendsBricks.com for bringing this project to our attention. And, if you are inspired to build your own firehouse-clubhouse-rocket contraption, or other awesome LEGO Friends modifications, check out the LEGO Friends section of the Online LEGO Shop. 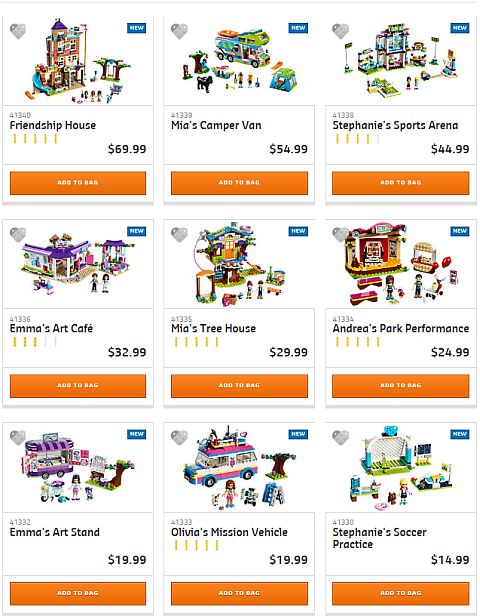 What do you think? How do you like the Friendship 5 rocket? And what do you think of the 2018 LEGO Friends sets? Do you have any of them already? Have you modified them? Feel free to share and discuss in the comment section below! 😉

Next post: LEGO Star Wars UCS Falcon back in stock!