One of the most interesting new sets this month is the #21042 LEGO Architecture Statue of Liberty. This is LEGO’s second attempt at a large brick-built version of the famous statue, the first one being the #3450 LEGO Statue of Liberty from the year 2000. The earlier statue was released as a large LEGO sculpture with 2,882 pieces and standing 33 inches tall – and that was just the statue itself with no included pedestal. It was the largest LEGO set in its time, and an amazing source of the super-rare sand-green bricks. The new set is more modest in size with 1,685 pieces, and standing 17 inches tall, including a large pedestal. It is released under the LEGO Architecture line, and is still large enough to look impressive as a display-piece on a desk or shelf. Let’s take a closer look. 🙂 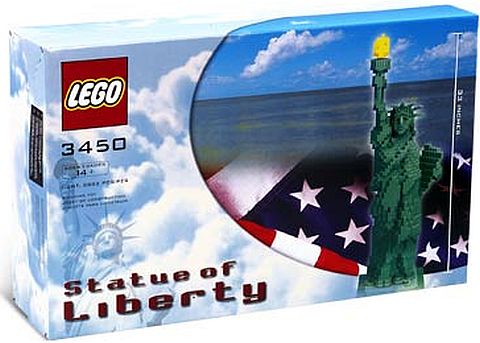 To begin, here is the official description of the set: Celebrate a monumental blend of architecture and sculpture with this #21042 LEGO Architecture The Statue of Liberty set. America’s iconic symbol of freedom stands more than 305 feet above Liberty Island in New York harbor, welcoming seafarers from around the globe. This impressive LEGO interpretation faithfully reproduces the monument’s harmonious blend of sculpture and architecture with its intricately detailed shield-lined pedestal, brick detailing and columned balconies. The beautifully crafted Lady Liberty statue features a flowing robe, broken shackles, 7-ray crown, iconic tablet and an upraised arm bearing a golden torch. Finished with an authentic sand-green and beige color scheme, and a decorative nameplate, this model delivers a highly satisfying building experience to all with an interest in architecture, travel, history and design, and makes a truly symbolic centerpiece for the home or office. Measures over 17” (44cm) high, 5” (14cm) wide and 5” (14cm) deep. 1,685 pieces. Price: 119.99 – BUY HERE 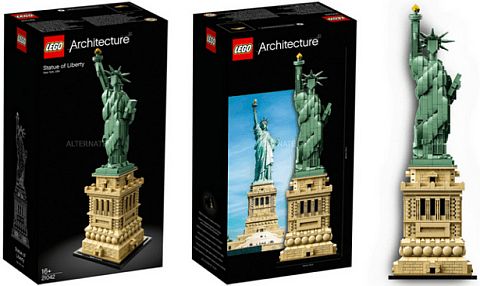 The two most outstanding features of the #21042 LEGO Architecture Statue of Liberty is the intricately detailed tan color pedestal, and the sculpting of the flowing robes using lots of curved LEGO elements in sand-green. There are a number of re-colored elements in this set, including the sand-green handcuffs (you use two in the set, and there is also an extra). 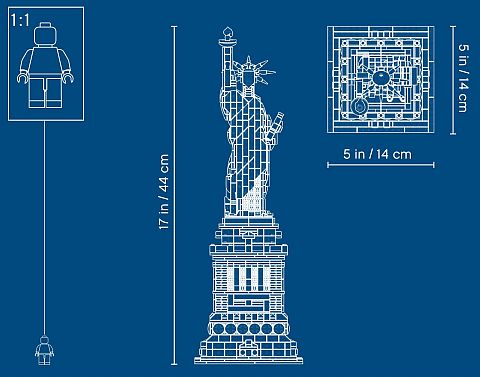 While most LEGO fans seem to agree that LEGO designers did an impressive job on both the pedestal and the shaping of the statue, there are differences of opinion on the use of a plain shield for the face. Some LEGO fans believe that the shield matches the style of the sculpture well, while others feel that it makes the statue look like she has been defaced. I do have to agree that the face (and neck) looks rather strange from certain angles, and I’m looking forward to see how LEGO fans will modify this feature.

In the video-review below, JANGBRiCKS will show you the set in more detail, including the internal core of the statue itself. LEGO designers have been heavily using the internal core building technique, as we have seen in many recent sets (the entire LEGO BrickHeadz line is an excellent example). Basically, they build a rough-looking but strong internal core using bricks with studs on the sides, then simply layer a shell over it. It is a very useful technique for models that require a lot of sculpting and detailing.

In summary, I would say that #21042 LEGO Architecture Statue of Liberty is a more appealing set than the previous model. The color-combination of tan and sand-green is very pleasing and true to the source-material. The addition of the pedestal was a good idea to make the model visually more interesting. Although the set is not as large as the previous one, it is just big enough to make an impressive display without taking up too much space. And the model is also an excellent example of sculpting with LEGO, and a great learning tool. If you want to check it out, it is available at the LEGO Architecture section of the Online LEGO Shop. 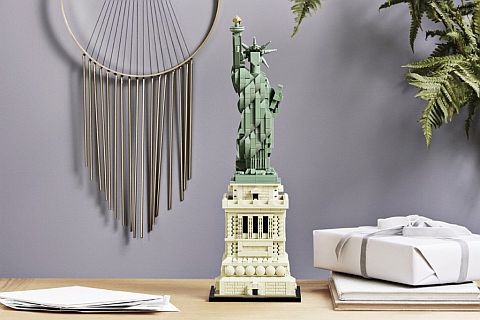 What do you think? How do you like the LEGO Architecture Statute of Liberty? Do you own the previous model, are you planning to get the new one? Or do you have it already? Feel free to share your thoughts and own reviews in the comment section below! 😉

Next post: The LEGO Movie 2: The Second Part trailer