The recently released #42083 LEGO Technic: Bugatti Chiron is the ultimate 1:8 scale replica of the real vehicle, with a wealth of luxurious features, including aerodynamic bodywork with an active rear wing, logoed spoked rims with low-profile tires, detailed brake discs, W16 engine with moving pistons, and more. We have talked about the set in detail here: LEGO Technic Bugatti Chiron Available Now! What I wanted to show you today are a couple of alternatives in case you find the LEGO Technic version of the Chiron a little too big and pricey for your taste. 🙂 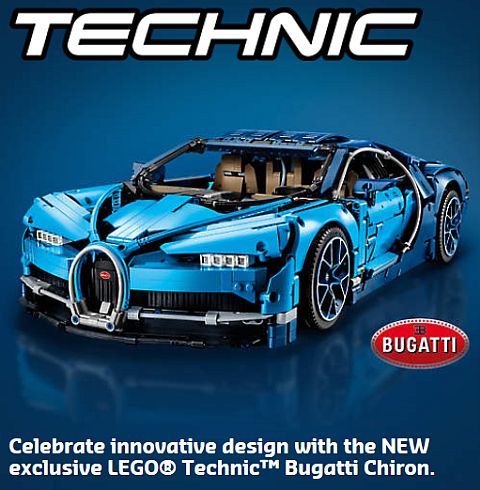 Don’t get me wrong, the #42083 LEGO Technic: Bugatti Chiron is an amazing LEGO set, and if you are into realistic car models, you should definitely consider getting it. LEGO Technic’s unique feature is that it focuses on recreating the mechanics of a vehicle, so you get a great experience in advanced building techniques. LEGO Technic is pretty much the pinnacle of advanced modeling with LEGO. In addition, LEGO Technic sets of recent years also look great on display with the help of specially designed LEGO Technic panels and other unique pieces. So, yes, it’s an awesome set, but it is also very big (3,599 pieces, and measures over 5” high, 22”long and 9” wide), and very expensive ($349.99). If you don’t have the display room and/or the funds to get this awesome set, but you would like to have a Bugatti Chiron in your collection, there are other choices. 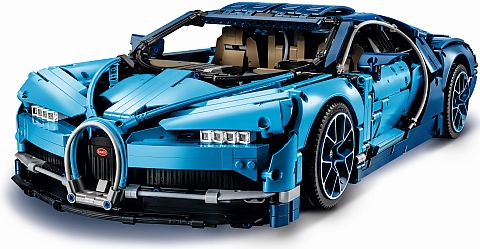 First of all, last year, LEGO released the #75878 LEGO Speed Champions Bugatti Chiron in the LEGO Speed Champions collection (see below). Although this is a small, minifig-scale car, it captures the shaping and colors of the Bugatti Chiron quite well with the help of some clever building techniques and stickers. As this model is minifig-scale it can fit perfectly in your LEGO city display right out of the box.

If you feel that the LEGO Speed Champions version is a little too simple and small for your taste, there is also a slightly larger and much more complex option, created by LEGO fan Gerald Cacas. Gerald is known for his small, but realistic LEGO vehicles; often beefed up versions of LEGO Speed Champions cars. Gerald’s Bugatti Chiron is seven studs wide, so just a bit wider than the LEGO Speed Champions version. However, it includes many of the features of the large LEGO Technic Bugatti Chiron. This includes the iconic curves around the windows/doors and the front of the hood (created with LEGO flex-tubes cut to size), opening doors, opening hood with a mini version of the Bugatti overnight bag inside, adjustable rear wing, tan interior with brick-built seats and other details, and more. Gerald was even able to replicate the splitting body feature of the large LEGO Speed Champions Bugatti Chiron with removable engine. Check out the video below to see all the details and functions.

Really cool, isn’t it? I very much like the splitting feature, the removable engine, and the nicely detailed interior. It’s too bad that some of the colors are not available in dark-azure, so Gerald had to use regular blue pieces instead, but it is quite possible that in the future LEGO will release those parts in dark-azure as well. If you would like to build your own mini Bugatti Chiron, Gerald shows many of the individual components in detail both in the video above and at his flickr gallery. And, you are unable to figure out some of the sections or building techniques, he is happy to answer questions. 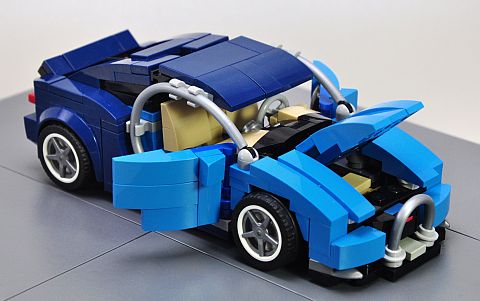 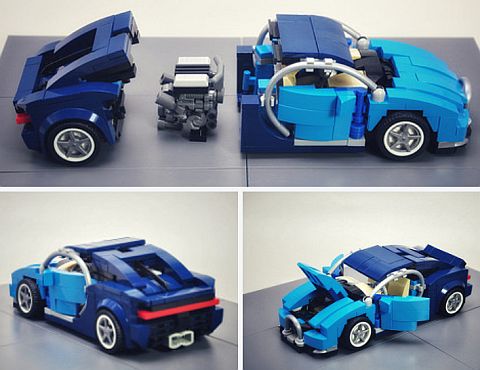 What do you think? How do you like the LEGO Technic Bugatti Chiron? Do you have it already? And what do you think of the custom mini version? Are you planning to build it? Feel free to share your thoughts in the comment section below! 😉