It’s not often I feel compelled to build the custom model of another LEGO fan, but when I saw Jason Allemann’s (JKBrickWorks) Sisyphus motorized kinetic sculpture, I had to give it a try. I first became aware of Jason’s work when I heard about his galloping LEGO horse model. At that time, I was completely awed and intimidated by how such a model could have been designed and built. The functionality was beyond anything I could have imagined building from LEGO. Even now, that I have a few years of building under my belt, it still feels completely beyond anything I could ever hope to design on my own. 🙂 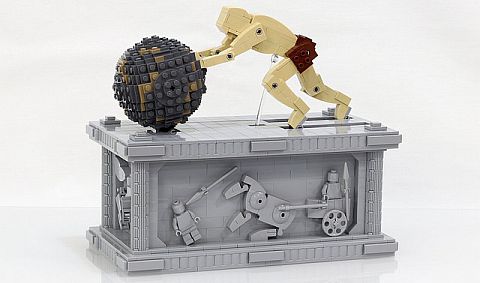 However, through those years, I did manage to amass a fair amount of LEGO parts, which meant I could potentially have many of the pieces needed to attempt one of Jason’s beautiful moving sculptures. I selected the updated version of the LEGO Sisyphus Automata (Jason had an earlier and later model as we discussed here), downloaded the instructions from Jason’s website, and began gathering the necessary pieces. Turns out I still needed about a hundred bucks worth of parts, but I felt that was not bad given the size and functionality of the model (if you have a larger collection than mine, or different parts selection, it may cost you more or less to build the model). I purchased the extra parts needed at the Online LEGO Shop, and after some hiccups, it took about two months to receive everything.

Once I got all the necessary parts, the model went together remarkably easily. The instructions are fairly well laid out, and I only had one small issue with stability while making the base that goes under Sisyphus. The instructions also don’t really tell you how to change the motorized version (which is what I built) to the hand-crank version, but it’s not too hard to figure out. Below, I will cover a few things I learned while building the set.

It may sound like an obvious statement, but a complex mechanism really benefits from having lots of accessibility. In this model, the two long sides of the base swing open like massive doors. This allows for a lot of room to get your hands on the inner workings of the set. 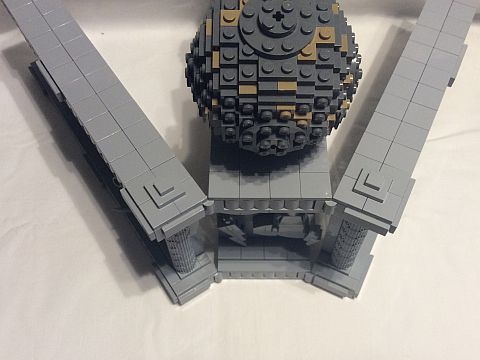 If this was an official LEGO model, chances are LEGO designers wouldn’t want fans to worry too much about how all the gears and other mechanical components come together and why. Official LEGO sets with functional components typically have a veil of mystique around them, as so much is compartmentalized in the building process. This means you typically forget how the first part worked, other than it fits into the second part, and now everything works like magic.

Jason’s model doesn’t shield you from the mechanical workings. For instance, the initial motor assembly gears down the speed of the motor three times, and that’s all it does. Then, when it comes to the moving parts, you essentially build three cranks – each with its own lift-arms – that limit and direct movement. It is clear from beginning to finish what you are building and why. The final mechanism may look just as busy as an official LEGO set, but the way Jason makes you build it and how everything is laid out is much more digestible – and thus duplicatable – if you decide to build your own automata. 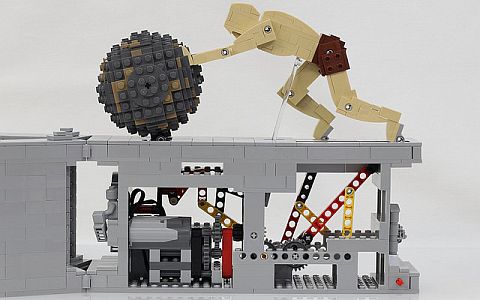 The added bonus of having access to all the working mechanisms is that it is easier to get to the battery-pack and disengage one of the gears when you want to switch to manual power. The only downside is when building the middle section, as the central supports are a bit flimsy when you first start working with them. However, the supports do make it easy to see parts being added in the instructions, and they eventually firm up as you get farther along the building process.

I typically don’t make LEGO models that move, which means I don’t have to worry about switching from motorized to manual version. Therefore, it was an interesting surprise to see a removable plug being used in this model. While building one of the long walls/doors of the pedestal, there was an odd hole. At first, my wife and I thought it might be some sort of strange window. Turns out, that’s where the crank goes when you want manual power. 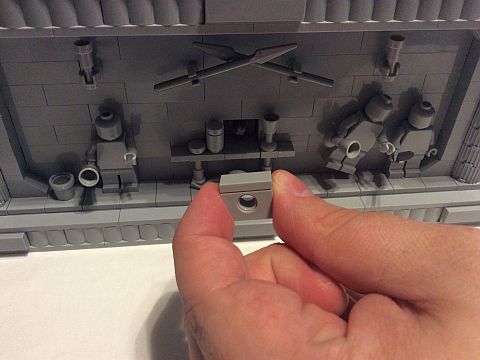 When you remove the crank to use the motorized version of the model, you are left with a weird square hole with a small axle sticking out. To solve this bit of ugliness, Jason added a plug that can be added when the motorized version is used. The plug is nothing more than a LEGO Technic brick with a tile on it. It is a very effective way to clean up the look of a model in motorized mode, while at the same time keeping the conversion super easy (just pop the plug in or out).

I’m still processing how I can incorporate this simple technique into my own LEGO creations. We often feel obligated to firmly attach and connect all the pieces. This is mostly because we tend to dislike things rattling around. However, if we challenge ourselves to create plugs, we might find ways to expand our knowledge of the geometry of LEGO pieces.

Normally, when I build something, I don’t think too hard about the artistic presentation of my model. Rather, I simply ask myself, what would the LEGO version of this subject look like? The LEGO Sisyphus Automata, however, fits comfortably in the realm of art. With this comes new ways to think about a LEGO creation. 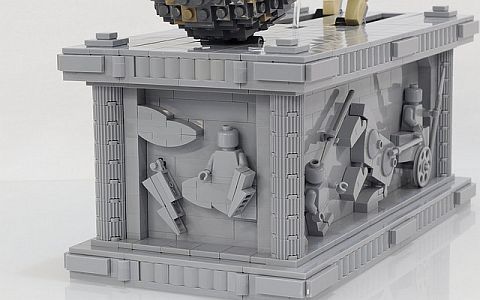 For instance, each side of the pedestal has a scene with minifigures, but if you look closely, all the minifigures are outward facing. This, in essence, gives us a feeling of history, as it has been quite some time since we had art where everyone looks like they are turned to face only one direction. We also see a simplification of certain elements like the horse and chariot. Again, this puts the model into historical perspective, as the ancient Greeks often used horses and chariots in their artwork, and depicted them in a similar way. 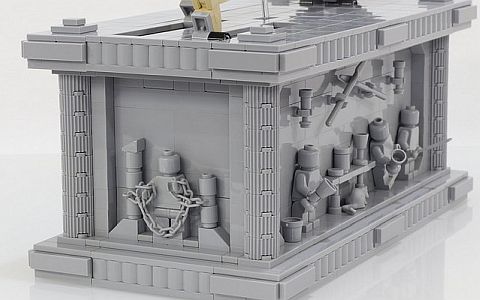 Additionally, although the designs on the pedestal are detailed, they are kept purposely less realistic to let the main feature of the model (the boulder and Sisyphus) stand out. The boulder has a fantastic design in the form of a simple sphere, with added depth and highlights achieved by bits of color. Meanwhile, Sisyphus has so many articulating parts that his shape and movement almost looks real. From his skin color to the exact joints that needed to be emphasized, he really stands out as a great looking statue – but that’s an illusion. In reality, Sisyphus is a collection of some rather bland LEGO parts. It is the presentation that is masterfully done.

Let’s break this down a bit more to appreciate and learn from the techniques. Sisyphus and the boulder are in color, therefore they are more interesting to our eyes than the pedestal. The boulder has an exquisite design, and since Sisyphus is connected to the boulder, he also benefits from the close proximity. Sisyphus has some basic shapes to him, but they are within the styling of the pedestal, so we can disregard those limitations. Finally, Sisyphus features many moving elements compared to the boulder, which only rocks slightly, therefore our brain says Sisyphus is the most interesting thing here. This in no way is a dig or a slight to how Sisyphus looks. Rather, this is some of the highest praise I can offer. It is rare to see this level of artistic focus in a model, which stands as a shining example of what to aspire towards.

➡ FINAL THOUGHTS ON THE SISYPHUS MODEL

If you would like to build your own Sisyphus model, you can download the instructions at Jason’s website at JKBrickWorks.com. If you don’t have a large selection of pieces in your own collection to use for the model, and/or you don’t want to bother gathering the parts from the Online LEGO Shop and BrickLink, you can also buy a Sisyphus building kit that includes all the parts you need at Jason’s store at MOChub.com. There are two versions of the building kit; non-motorized (currently $290) and motorized (currently $330). While they might be out of most people’s price range, I feel you get your money’s worth. And, again, if you get most of the parts already, you can download the instructions for free. Whether you want an interesting conversation piece, a bit of art, or an interesting build, the LEGO Sisyphus Automata definitely delivers. 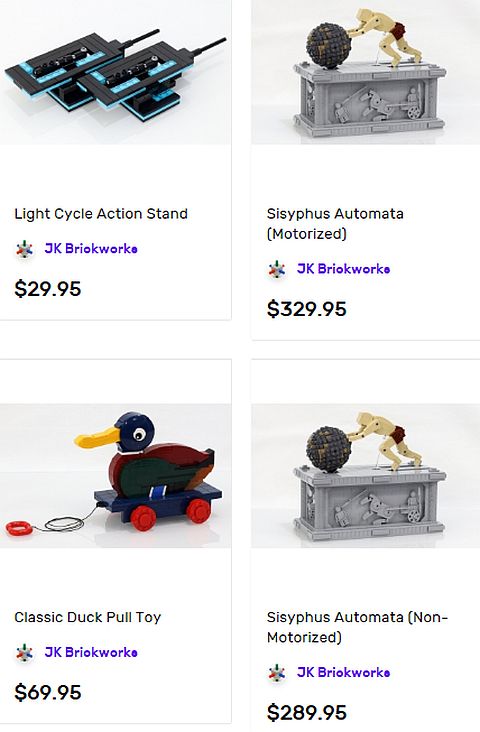 Personally, I feel this model opened my eyes up to a portion of building that bridges the gap between the functionality of LEGO Technic and the slick presentation of the standard LEGO building system. When I look at LEGO Technic sets, I usually turn them down because they are mostly skeletal looking vehicles. I like vehicles just fine, but I like them to look pretty, like the cars in the LEGO Creator Expert line. The LEGO Sisyphus Automata is something different and will most likely influence how I build in the future. It is remarkable when I can say a LEGO creation will change my approach to building.

If you feel that building the LEGO Sisyphus Automata is too rich for your budget, you may want to check out some of Jason’s smaller creations. He provides free instructions for most of them (and sometimes building kits) and having built one of his bigger models, I can definitely say it is worth the effort! And you might also want to keep an eye on Jason’s LEGO Ideas Pop-Up Book project, which was recently approved to be the next LEGO Ideas set (scheduled for release in the second half of 2018). 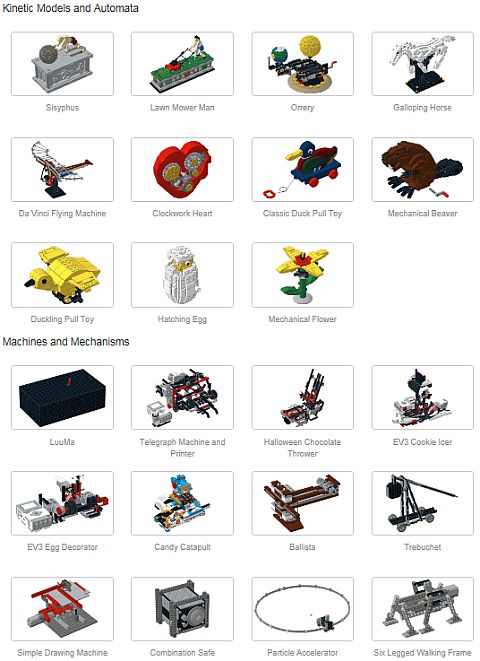 What do you think? How do you like the LEGO Sisyphus Automata model? Have you built it already? Or, are you planning to? And did you build any of the other models by Jason? Feel free to share your thoughts and own reviews in the comment section below! 😉