Earlier this year, LEGO released a series of five LEGO Elves sets (see: 2018 LEGO Elves Sets Are Still Full of Magic!), and this month two more sets were added to the collection. As usual with LEGO Elves, the sets are beautifully detailed with lots of interesting little accessories and lovely colors (with some dark tones added in to represent the villainess Noctura), and we also get more of the brick-built magical creatures called Guardians. Today, we will take a look at the last two sets in the collection. 🙂 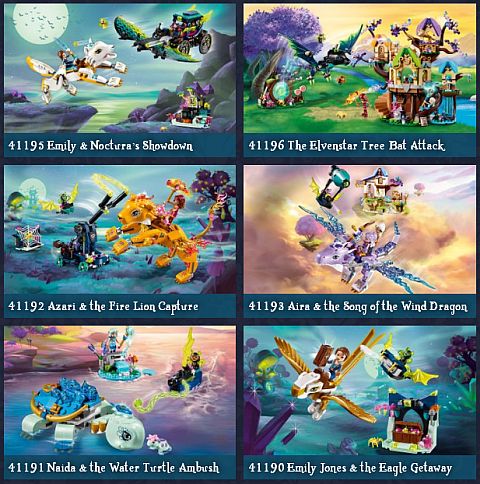 Lumia is one of the oldest elves in Elvendale and the Guardian of Light. She lives in the Elvenstar Tree and guards the portal to the Shadow World where she banished Noctura almost a thousand years ago. Lumia has the ability the shapeshift into an eagle or wolf, thus she has a mini-doll form in two of the sets (#41193 and #41196), an eagle form #41190, and a wolf form in #41195. Noctura, who used to be Lumia’s best friend, is also a shapeshifter who can turn into a bat and has a number of bat-minions to aid her in her villainous schemes. She comes in mini-doll form in the #41195 LEGO Elves Emily & Noctura’s Showdown, and bat form in the #41196 LEGO Elves The Elvenstar Tree Bat Attack. It’s interesting to note that Noctura is the first mini-doll with two differently colored arms.

The #41195 LEGO Elves Emily & Noctura’s Showdown set features three separate builds. The first one is a laboratory building with a fireplace and magic cauldron that Noctura uses to make bats appear. This section of the set is full of interesting decorative pieces and colors. The second build is Noctura’s carriage, which was given to her by the bats for her one-thousandths birthday. The carriage is operated by one of the bats, and features flapping batwings for flying mode. The third build is Lumia in wolf form, with Emily Jones on her back wielding the Sword of Light. An interesting feature of this set is that the bat laboratory can be connected to the tower in the #41194 LEGO Elves Noctura’s Tower & the Earth Fox Rescue. The set includes 2 mini-doll figures: Emily Jones and Noctura, plus Phyll and Myzo bat figures, and a spider. 650 pieces. Price: $49.99 – BUY HERE 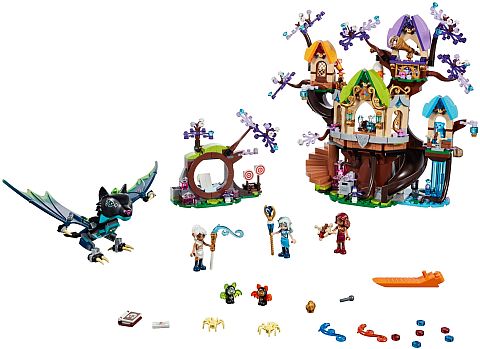 The #41196 LEGO Elves The Elvenstar Tree Bat Attack also includes three separate builds. The main feature is a magical tree house with three levels, a hidden staircase, a slide, a waterfall tower, and lots of hidden features and functions. The second build is a portal through which the bats appear. There are a couple of targets next to the portal so the elves can practice their shooting skills with the bat shooter of the Elvenstar Tree. The third build is Noctura in bat form. She is actually much smaller and friendlier looking than I expected from an evil bat. As usual in LEGO Elves sets, there are tons of little accessories in all kinds of interesting shapes and colors. The set includes 3 mini-doll figures: Lumia, Naida and Azari, plus Hippo and Crase bat figures, Blubeary the bear figure, and two spiders. 883 pieces. Price: $79.99 – BUY HERE

LEGO Elves sets are absolutely beautiful, and I would highly recommend all of them. From this most recent collection, my favorites are the #41193 LEGO Elves Aira & The Song of the Wind Dragon and the#41196 LEGO Elves The Elvenstar Tree Bat Attack, because of the cute tree houses, but all the other sets are lovely too. I hope that one day LEGO will release an ultimate LEGO Elves sets with a large tree house and lots of elves and magical features. LEGO Elves sets are also fairly priced, and the amount of interesting pieces and colors are staggering. In addition, the decorations on the mini-dolls and other characters are some of the finest and most artistic printing LEGO has ever done. If you want to check them out, the most recent sets and some of the earlier releases are available at the LEGO Elves section of the Online LEGO Shop. 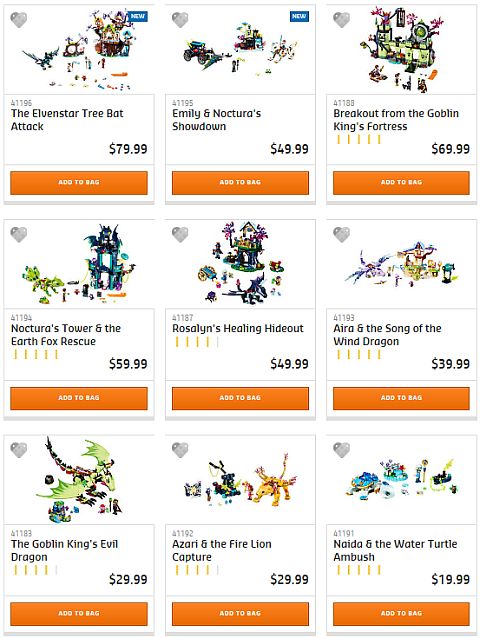 What do you think? How do you like the LEGO Elves sets released this year? Do you have any of them already? Which ones are your favorite characters and brick-built creatures? Feel free to share your thoughts and own reviews in the comment section below! 😉