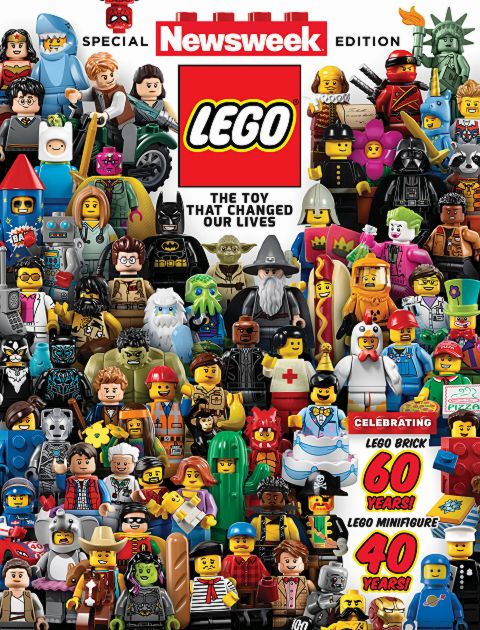 The most recent collaboration to recount LEGO’s history has been between the LEGO Group and Newsweek Magazine. For the upcoming Newsweek Special Edition: LEGO – The Toy That Changed Our Lives, Newsweek journalists worked very closely with the LEGO Group, and received exclusive interviews with LEGO designers and workers in the Billund factory, plus exclusive behind-the-scenes photos of the LEGO creation process and of the sets themselves – from classic sets like the #928 LEGO Galaxy Explorer, to the latest branded ones such as Jurassic World and Harry Potter.

In this almost 100-page publication, Newsweek tells the story of the LEGO company from its earliest days making wooden toys to its current place as the world’s most beloved building material. The total of fifteen articles are peppered with interesting facts, insights, interviews, and lots of pictures. The first article, The Story of LEGO, is organized as a timeline, highlighting some of the key points in LEGO’s history. In the second article, How the Brick is Made, Henrik Østergaard Nielsen, Qualifying & Support Director at the LEGO Group, talks about how LEGO moulds and LEGO pieces are designed and moulded at the LEGO factory. 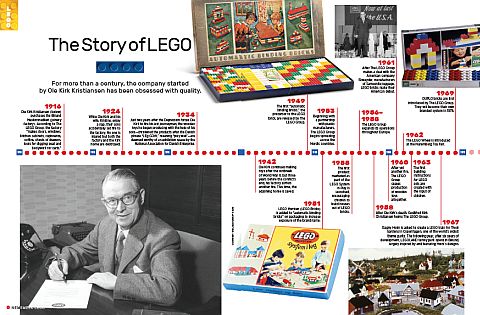 Since its inception, the LEGO system of play has been all about building elaborate worlds that people can explore, but it wasn’t until the 1970s the LEGO Group designers realized their sets were missing a key item; people. Many Faces of the Minifigure is one of the longest articles in the series, covering the history of LEGO minifigures from generic little plastic civilians with smiley faces, to highly detailed and individualized characters that are sought-after by collectors. Matthew James Ashton, Vice President of Design at the LEGO Group, shares some interesting insights about the current popularity of minifigures, and also talk about the design process each minifigure goes through.

Nathan Sawaya opened the door to LEGO bricks being taken seriously as a sculpting medium. Artist of the Brick, is an interview with Nathan about his art and what the LEGO brick means to him. While this is not the first time Nathan has been interviewed, I always appreciate his thoughtful and playful tidbits. The article also includes pictures of some of Nathan’s latest sculptures. The Brick Barons section highlights some fun facts about LEGO, that we often see in LEGO infographics; the number of LEGO minifigures currently around the world, the tallest LEGO tower, the number of tires LEGO produces each year, etc. LEGOstalgia features nice pictures of some of the most iconic LEGO sets, along with a little bit of their history. 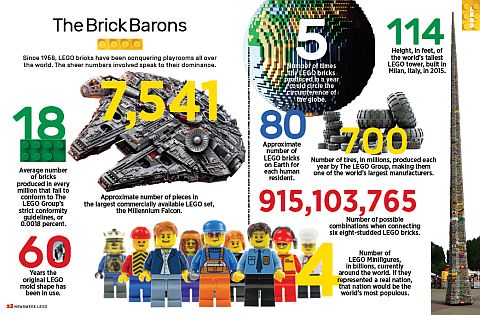 The next article covers the LEGO Ideas platform, and the sets that came out of the collaboration between the LEGO Group and adult LEGO fans. In LEGO Brick Learning, Sarah Bouchie, Head of Learning Through Play in Early Childhood at The LEGO Foundation, and Rob Lowe, Senior Director of Kids Engagement at the LEGO Group, discuss the work of The LEGO Foundation, incorporating LEGO bricks into as many educational models as possible.

A couple of short articles mention the LEGO idea books released from the 1960s to the 1990, and the history of LEGOLAND parks. There are some nice old pictures here from various ads, brochures, and other publications. The next article, Everything is Awesome, is an interesting interview with Jill Wilfert, a LEGO executive who helped bring The LEGO Movie to the screen, and is now working on ushering in the sequel.

Rok Kobe and his team at the LEGO Group are responsible for the LEGO Architecture sets. In Real World LEGO Builds, he talks about some of the most recent LEGO Architecture sets and the challenges LEGO designers faced. Then, we are back in the LEGO factory in Billund, Denmark, discussing the exclusive LEGO Inside Tour experience in the section titled Inside a LEGO Factory. 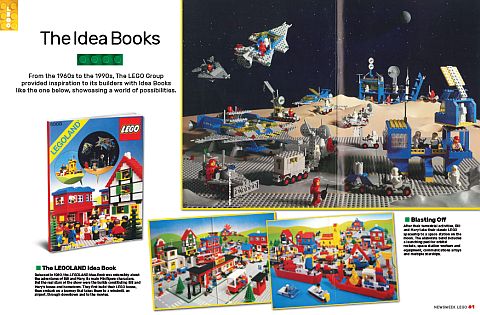 One of the LEGO Group’s most important partnerships has been with the Star Wars franchise, which gets its own section with lots of fun facts, plus an interview with Jens K. Frekeriksen who has been involved with LEGO Star Wars since the very beginning. Finally, in The Many Worlds of the LEGO Brick section, other LEGO licenses are mentioned with fun facts, like LEGO Harry Potter, LEGO Ghostbusters, LEGO The Simpsons, LEGO Indiana Jones, LEGO Minecraft, LEGO Jurassic World, LEGO Lord of the Rings, LEGO Super Heroes, and more.

Even though this entire Newsweek Special Edition is dedicated to LEGO, the whole publication is an easy read, because of the mixing of interviews, infographics, bits of interesting facts, and lots of pictures with captions. Although long-time LEGO fans would be already familiar with most of the information shared here, I think the publication is still valuable and a good summary. I would also recommend it to those who are new to the LEGO hobby, or even kids old enough to show interest in LEGO’s history. 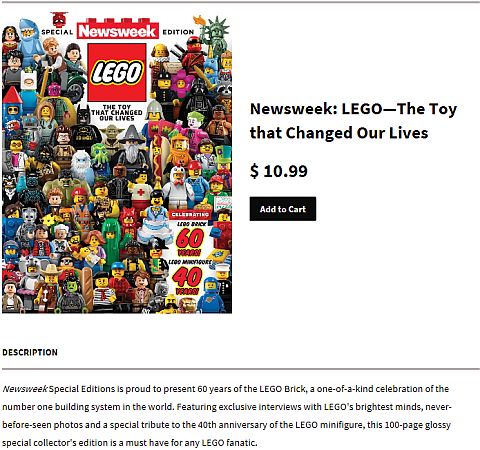 If you are interested to pick up a copy of the magazine, the Newsweek Special Edition: LEGO – The Toy That Changed Our Lives, will be available on July 17th wherever magazines are sold and at OnNewsStandsNow.com. And you might also be interested in the following related posts:

Previous post: Building a LEGO ship in a real bottle