➡ #70650 LEGO NINJAGO DESTINY’S WING: The main attraction of this set is a small jet for Kai in the usual red/black/gold color-scheme appropriate for the fire ninja. The jet is pretty basic, featuring an opening cockpit and two sets of shooters (spring-loaded shooters and stud-shooters). I always liked small jets like this, as they are very swooshable, and could be easily repurposed for virtually any theme or story. It’s interesting how much forward the wings are placed, giving the jet an unusual silhouette. The villain’s name is Jet Jack, and she is after the ornate Dragonbone Blade (part of the collectible Dragon Armor), which sits on a small pedestal. Nothing really stands out in this small set, so it may not be worth picking it up, especially since the price is quite high. 181 pieces. Price: $19.99 – BUY HERE 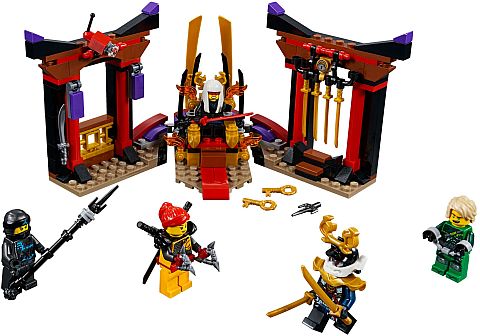 ➡ #70651 LEGO NINJAGO THRONE ROOM SHOWDOWN: This is also a small set, but with a much better value than the previous one. You get five highly-detailed minifigures: Harumi, Lloyd, Nya, Skylor, and Samurai X with very nice accessories (Skylor gets Batman’s utility belt in red!). The setting is a throne room with a nicely designed throne (with lots of gold pieces, six detachable weapons, and a secret compartment). On the two sides of the throne are a couple of movable wall sections; one featuring a very rudimentary jail cell, and the other a weapons’ display. While this set may be small, the five minifigures, large selection of weapons and other accessories, and pleasing design make this a good set for your money. 221 pieces. Price: $19.99 – BUY HERE 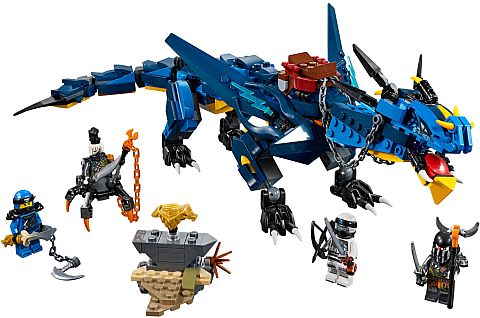 ➡ #70652 LEGO NINJAGO STORMBRINGER: The main attraction of this set is Stormbringer, the Lightning Dragon. While I always liked LEGO Ninjago dragons, the head/neck section of this one looks very awkward. The main reason for this is that the neck hides two long spring-loaded shooters that shoot out of the mouth of the dragon. If you don’t care for the shooters, it might be a good idea to redesign the neck. The rest of the dragon looks fine with nice shaping, colors, and high posability, so don’t give up on it just because it got an ugly head/neck. It’s also worth mentioning that the eyes are printed! Another interesting feature of the dragon is that it can be combined with the #17101 LEGO BOOST Creative Toolbox. You download the app, combine the parts from the two sets according to the instructions, and code the dragon to fire the shooters, create a color-sensing ejector seat, and much more, using the intuitive programming blocks. I haven’t seen anyone review this feature of the set yet, but hopefully, further information will be coming soon. Besides the dragon, there is just a small pedestal to hold the second collectible Dragon Armor piece; the ornate Dragon Chestplate. The four minifigures are Jay, Zane, Daddy No Legs, and Muzzle. Check out the video review below to see all the details and functions of the set. Stormbringer measures over 4” (12cm) high, 19” (49cm) long and 5” (14cm) wide. 493 pieces. Price: $39.99 – BUY HERE 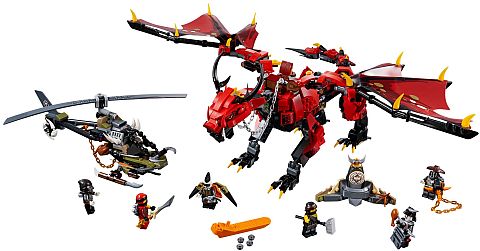 ➡ #70653 LEGO NINJAGO FIRSTBOURNE: The red dragon (Firstbourne) has a much nicer shaping for the head than Jay’s blue dragon (and the eyes are printed, just like in the previous set). It has proper dragon wings that can flap via a trigger at the back, and because of the flexible material, they can also fold. The posability is great, especially the swiping tail. On the baddies side, we the Dragon Hunters’ HunterCopter with stud-shooters and other accessories. The small pedestal holds two collectible Dragon Armor pieces; the Dragon Helmet and Dragon Chestplate. The six minifigures are Kai, Cole, Heavy Metal, Jet Jack, Chew Toy, and Muzzle (lots of baddies here!). Notice that Kai has two new short blades called tantos. Firstbourne measures over 7” (19cm) high, 20” (53cm) long and 18” (48cm) wide. HunterCopter measures over 4” (11cm) high, 9” (25cm) long and 2” (6cm) wide. 882 pieces. Price: $69.99 – BUY HERE 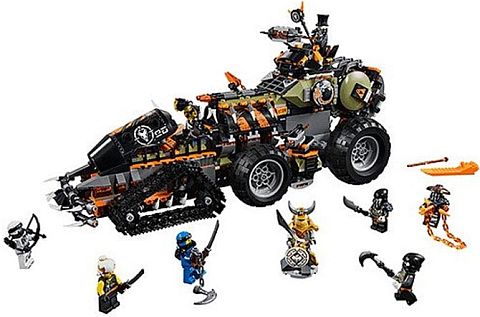 ➡ #70654 LEGO NINJAGO DIESELNAUT: This is the big vehicle for the badguys this season, full of spikes, chains, claws, shooters, monster wheels, and more! I have been liking this set ever since it was first revealed. It has such an awesome post-apocalyptic vibe, and the color-scheme is great too! Play-features include rotating turrets with spring-loaded shooters, an opening minifigure cockpit, minifigure platform with fully opening roof, crane function, jail, and hidden rear compartment with removable and foldable weapon rack. There is also a statue with four Dragon Armor pieces; the Dragon Helmet, Dragon Chestplate, Dragonbone Blade and Dragon Shield. Make sure you check out the video-review below, so you can see all the features and play-functions. The seven minifigures included are Teen Wu, Jay, Zane, Iron Baron, Heavy Metal, Muzzle, and Skullbreaker. Dieselnaut measures over 7” (18cm) high, 19” (49cm) long and 9” (23cm) wide. 1179 pieces. Price: $109.99 – BUY HERE 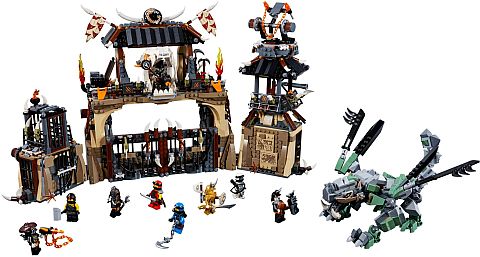 ➡ #70655 LEGO NINJAGO DRAGON PIT: LEGO Ninjago buildings tend to be both beautiful and impressive, and the Dragon Pit is no exception. It features three detachable sections; a main gate with mechanically opening gates and a viewing gallery above, a tall watchtower, and a prison tower. The viewing gallery includes a throne for Iron Baron, a weapon rack, and a gate-opening function to let the included Earth Dragon into the pit. The watchtower comes with a dual missile-shooter and a telescope, and there is a blacksmith’s workshop on the bottom floor. The jail has an opening dragonbone door and a trapdoor function to drop minifigures into the dragon pit. While we don’t know the story as the episodes haven’t aired yet, it appears that this is a gladiator-style battle arena where dragons and minifigs are forced to fight for the pleasure of the Iron Baron. Speaking of dragons, the Earth Dragon is the smallest in the 2018 collection, but it comes with a really nice earthy color-scheme and full posability. Just like in the previous large set, four Dragon Armor pieces are included; the Dragon Helmet, Dragon Chestplate, Dragonbone Blade and Dragon Shield. The nine minifigures are the Dragon Master, Jay, Zane, Cole, Kai, Iron Baron, Arkade, Heavy Metal, and Chew Toy. Dragon Pit measures over 10” (27cm) high, 20” (51cm) wide and 7” (20cm) deep. Dragon measures over 3” (9cm) high, 9” (25cm) long and 11” (28cm) wide. 1660 pieces. Price: 129.99 – BUY HERE 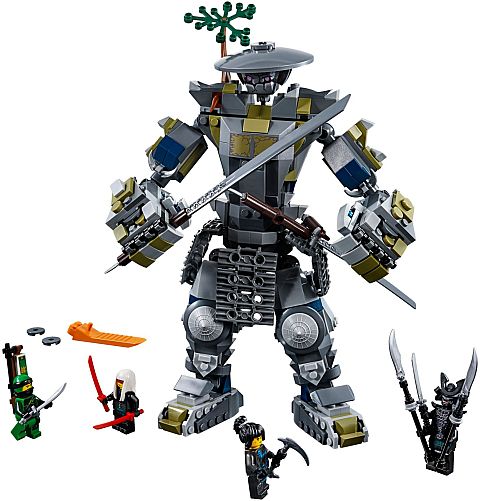 ➡ #70658 LEGO NINJAGO ONI TITAN: LEGO has been releasing a lot of mechs in the past couple of years, and they seem to be getting better and more refined with each model. While technically the Oni Titan is not a mech, but a stone giant created by Lord Garmadon at the end of the previous season, it is built very much like a mech. Rather then mechanical details, here we get subdued colors, earthy decorations, and the overall shape of a samurai. As an adult LEGO fan, I do appreciate the subtle shapes and colors, but I’m not sure if kids will like it. Children tend to prefer brighter colors and more flashy details. The Titan is sturdy and has decent posability, so it may still work well as a play-set with younger LEGO fans. The four included minifigures are Lloyd, Nya, Lord Garmadon, and Harumi. Oni Titan measures over 9” (25cm) high, 2” (7cm) long and 7” (18cm) wide. 522 pieces. Price: $49.99 – BUY HERE 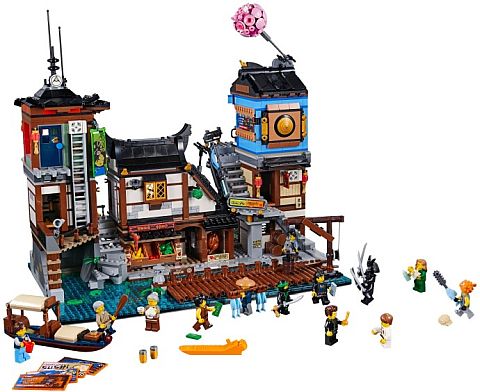 ➡ #70657 LEGO NINJAGO CITY DOCKS: This is technically a LEGO Ninjago Movie set, but it can also be considered a generic LEGO Ninjago location. It was designed to connect with the #70620 LEGO Ninjago Movie Ninjago City, but it can also be displayed by itself, and/or with the beautiful #70618 LEGO Ninjago Movie Destiny’s Bounty. I do not have the LEGO Ninjago City Docks yet (although I plan to get it), so we will have to rely on JANGBRiCKS to show us all the details in the video-review below. According to the official description, this highly detailed set features a harbor with a functioning crane and boat, and two levels of Old World locations including a grocery store with tipping food display and rotating rotisserie, house with map room and kitchen/bedroom, sculptor’s workshop, plus a dojo. There is also a tearoom and an arcade with interchangeable billboards, buildable arcade games, functioning vending machine and a buildable pig ‘balloon’ attached to the roof. The thirteen minifigures included are Lloyd, Cole (in casual outfit), Garmadon, Private Puffer, Runje, Chan Kong-Sang, Runme, Runde, Dareth, Lil’ Nelson, Mystake, Chad, and Betsy (with a baby figure). Measures over 14” (37cm) high, 14” (38cm) wide and 9” (25cm) deep. 3553 pieces. Price: $229.99 – BUY HERE

I would say that overall, the LEGO Ninjago Season 9 selection offers a good variety of sets that all stand on their own. The minifigs, weapons, and accessories are spread out evenly between the sets, so there is no real pressure to collect them all. You can pick the set(s) you like without feeling as if you are missing out on anything. Personally, I very much like the #70654 LEGO Ninjago Dieselnaut, and the #70655 LEGO Ninjago Dragon Pit. The #70652 LEGO Ninjago Stormbringer is also an interesting set because it can connect to LEGO BOOST, and the #70658 Oni Titan is a great example of a large brick-built figure/mech with subtle features. Amongst all of the new sets, the #70657 LEGO Ninjago Movie Ninjago City Docks stands out due to its enormous size, advanced building techniques, and beautiful details. It’s more of a display set for older teen and adult builders who like Asian-style architecture, but it has plenty of fun play-features too. If you would like to check out any of the new sets, they are listed at the LEGO Ninjago section of the Online LEGO Shop. 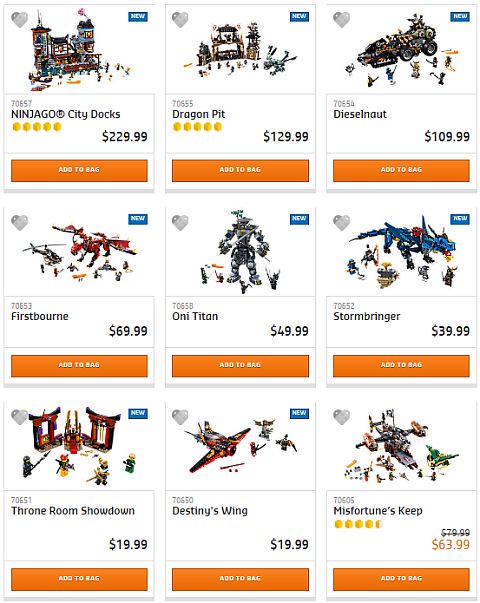 What do you think? How do you like the LEGO Ninjago Season 9 sets? Do you have a favorite? Have you gotten any of them already? Feel free to share your thoughts and own reviews in the comment section below! 😉

Next post: The Build a LEGO Lab contest is back!