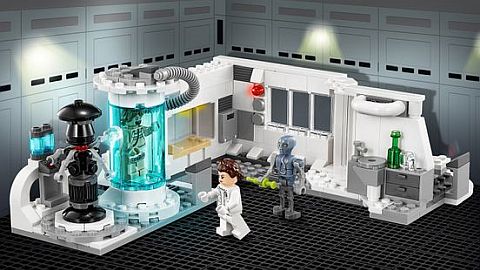 ➡ #75203 LEGO STAR WARS HOTH MEDICAL CHAMBER: This is not the first time we have gotten this scene in a set, but it’s nice to see updated features, building techniques, and minifigs. The opening of the bacta tank cleverly done, and rotating examination chair, bed, wash station, and other details all look great. Even the outside of the model is nicely built up, so there is no camera-unfriendly side of this display. The minifigs are updated slightly from their previous versions, and in the video-review below, JANGBRiCKS will show them side by side. A good set overall, if you don’t own the previous version. Medical chamber (opened out) measures over 3” (10cm) high, 8” (21cm) wide and 7” (18cm) deep. 255 pieces. Price: $29.99 – BUY HERE 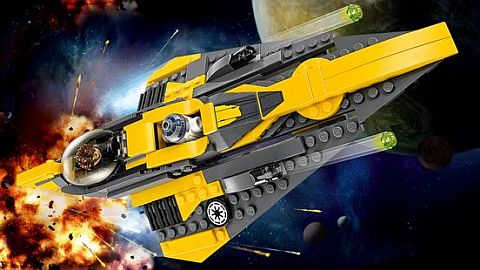 ➡ #75214 LEGO STAR WARS ANAKIN’S JEDI STARFIGHTER: This set was also done before, but the shaping of the starfighter has been updated significantly. Some of the features include retractable landing gear, an opening cockpit for Anakin, a clip underneath for his Lightsaber, a hidden compartment for extra ammo, space for R2-D2 and wing-mounted stud shooters. This is a simple set, just with the essentials, but it is well done and has a very reasonable price. Measures over 3” (8cm) high, 10” (27cm) long and 5” (13cm) wide. 247 pieces. Price: $19.99 – BUY HERE 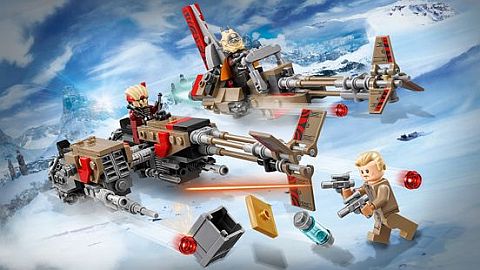 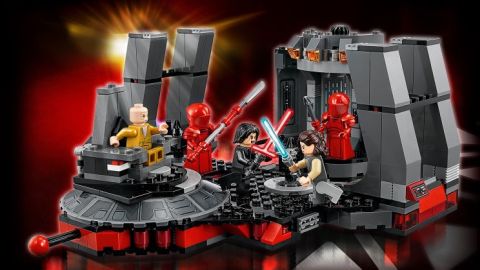 ➡ #75216 LEGO STAR WARS SNOKE’S THRONE ROOM: This is another interesting new set with an important scene from Star Wars: The Last Jedi. There are a few simple play-features like the rotating throne, knob-activated turning doorway, moving floor panel, and hidden compartments to store Snoke’s treasures and weapons. The five minifigures includes are Rey, Kylo Ren, Supreme Leader Snoke and two Elite Praetorian Guards. It is these guards that really steal the show! They are so red and so awesome, with printing both the front and the back of their beautiful robes (the bottom of the robes is a new piece – much more appropriate than the generic slope previously used for robes). And, take a look at those gorgeously sculpted helmets! The price of this set is unusually high though, and for no obvious reason. It shouldn’t cost more than $50, so hopefully it will go on sale in the near future. Measures over 4” (11cm) high, 9” (24cm) wide and 10” (26cm) deep. 492 pieces. Price: $69.99 – BUY HERE 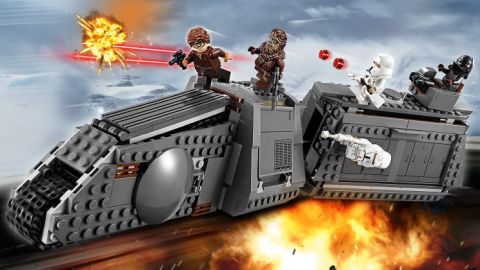 ➡ #75217 LEGO IMPERIAL CONVEYEX TRANSPORT: This is the second set from Solo: A Star Wars Story, depicting one of the most epic scenes from the movie with the Imperial Conveyex Transport snaking through the mountains. The armored locomotive features an engine section with a wraparound track, opening driver’s compartment, and weapon store. The detachable cargo wagon comes with opening sides, movable gun turret with stud shooters, space for the four included coaxium containers, and a ladder inside with an opening hatch on the roof. Sadly, LEGO only included one wagon, which makes it difficult the recreate the awesomeness of the scene. LEGO’s suggested solution is to hitch up multiple sets for a longer train, but the unusually high price doesn’t make this a very attractive solution. The five minifigures included are Han Solo, Chewbacca, an Imperial Gunner and two Range Troopers. Imperial Conveyex Transport with cargo wagon measures over 4” (12cm) high, 16” (43cm) long and 3” (9cm) wide. 622 pieces. Price: $89.99 – BUY HERE 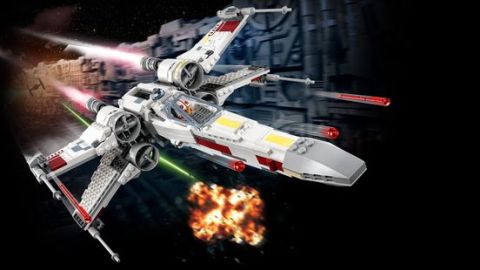 ➡ #75218 LEGO STAR WARS X-WING STARFIGHTER: While this looks like just another X-Wing, it is actually significantly updated from previous versions. The most impressive upgrade is the mechanism to transition the wings between cruise and attack modes. Make sure you check out the video-review below to see how it works. Another unusual feature is that the set comes with extra stickers and tiles to transform the X-Wing from Luke Skywalker’s Red Five into Biggs Darklighter’s Red Three. The helmets for Luke Skywalker and Biggs Darklighter are completely redesigned this year. Nice set, good price, and great upgrades. If you don’t own any of the previous X-Wings, this is a good choice. X-wing in attack mode measures over 4” (11cm) high, 13” (34cm) long and 11” (30cm) wide. 730 pieces. Price: $79.99 – BUY HERE 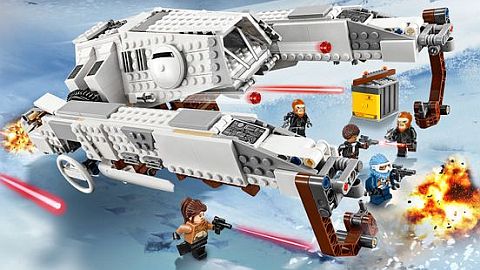 ➡ #75219 LEGO STAR WARS IMPERIAL AT-HAULER: This set is also from Solo: A Star Wars Story, and is meant to work with the #75215 LEGO Star Wars Cloud-Rider Swoop Bikes, and especially the #75217 LEGO Star Wars Imperial Conveyex Transport. It’s basically a crane/hauler for transporting anything from wagons to AT-STs. It’s not meant to be pretty, but it gets the job done. The vehicle features an opening minifigure cockpit, platform underneath, rotating lifter arms for flight and landing modes, and movable hooks on the end for latching onto the included buildable cargo container. The five minifigs included are Qi’ra, Val, Rio Durant (with four arms!) and two of Dryden’s guards. The price of this set is fine, but unless you are getting the other two Solo sets, it doesn’t make much sense by itself. And for $100 you can probably get something that is more versatile and iconic. Imperial AT-Hauler measures over 4” (12cm) high, 12” (32cm) long and 4” (21cm) wide. 829 pieces. Price: $99.99 – BUY HERE 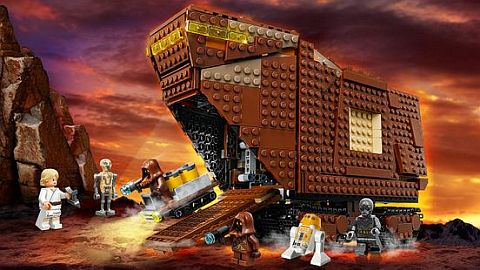 ➡ #75220 LEGO STAR WARS SANDCRAWLER: This is one great little sandcrawler! In fact, in some ways it is even better than the previously released larger versions. This rolling home of the Jawas features an opening cockpit, very cleverly built steering tracks, and removable panels that reveal a droid prison and articulated crane for loading droids aboard. The front ramp also flips down for offloading cargo and the buildable transport vehicle. This is a great play-set for kids and nice display set for adults that doesn’t take up enormous amount of space. And the price is right too! Measures over 7” (18cm) high, 12” (31cm) long and 4” (11cm) wide. 1239 pieces. Price: $139.99 – BUY HERE 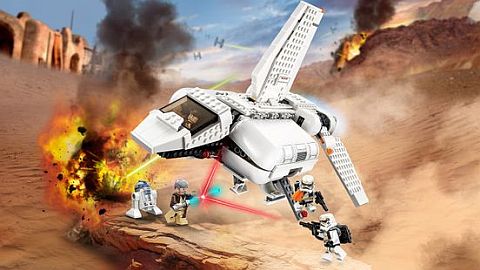 ➡ #75221 LEGO STAR WARS IMPERIAL LANDING CRAFT: This model is from Star Wars: A New Hope, meant to carry imperial troops. It has a nice shape, folding wings for flight/landing modes, stud shooters, landing gear, an opening cockpit, and opening top panels with a slide-out access ramp. Unfortunately, it can’t hold a whole lot of troops, and only a Sandtrooper and a Sandtrooper Squad Leader are included. Two other minifigs are Obi-Wan Kenobi, and an Imperial Shuttle Pilot. Measures over 9” (23cm) high, 12” (32cm) long and 6” (17cm) wide. 636 pieces. Price: $89.99 – BUY HERE

As you can see, the new LEGO Star Wars collection includes a great variety of sets from across the Star Wars universe. Some of them are re-releases with improvements, while others are fresh new designs. If you are interested in any of the sets, I recommend that you watch the video-review on it in the player above by JANGBRiCKS, as it will likely give you additional insights. Just use the drop-down menu in the upper left corner of the player to select the review you would like to watch. And you can find the whole selection at the LEGO Star Wars section of the Online LEGO Shop. 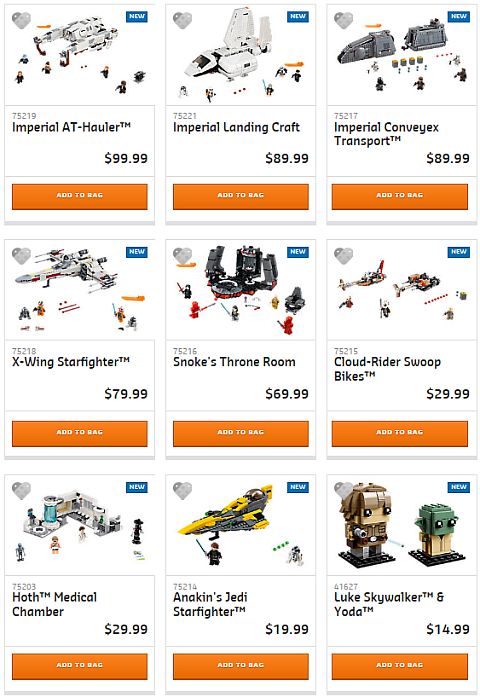 What do you think? How do you like the recently released LEGO Star Wars sets? Do you have a favorite? Are you planning to get any of them? Or do you have some of them already? Feel free to share your thoughts and discuss in the comment section below! 😉