While LEGO is a private, family-owned company, they still share their financial reports publicly, which is always insightful both for LEGO fans and those in the toy industry. The financial report for the first half of 2018 is an especially interesting read because of the challenges the entire toy industry felt due to the closure of Toys’R’Us in major markets. In addition, LEGO also made some pretty big changes last year, the results of which are just now starting to become apparent. Below, I have included LEGO’s half-year financial report for 2018, so we can discuss. 🙂 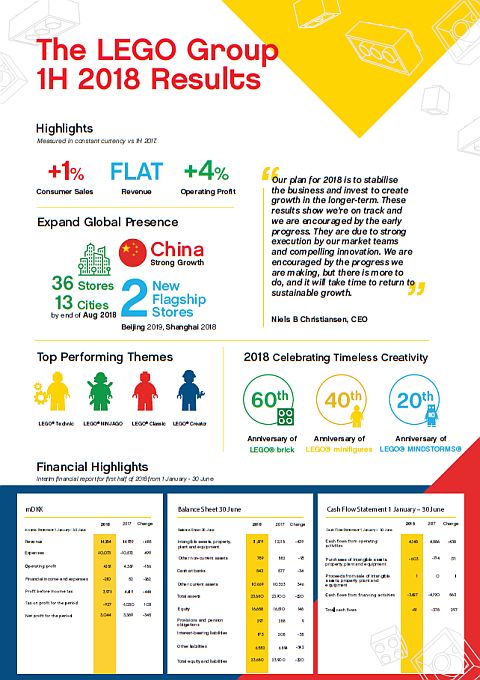 Here is a summary of the developments in the first half of 2018, and the detailed report starts in the next paragraph: Global consumer sales grew 1% in the six months to June 2018. Revenue has stabilized and growth is flat while operating profit is up 4 percent in constant exchange rates compared with the same period in 2017. In DKK terms, revenue was 14.3 billion, a decline of 5 percent compared with 14.9 billion in the first half of 2017. Operating profit declined 4 percent to DKK 4.2 billion. Net profit was DKK 3.0 billion, down 10 percent. Cash flow from operating activities was DKK 4.1 billion, compared with DKK 4.6 billion in 2017. These declines were driven mainly by the weakening of the US Dollar. (You can find a full-size version of the above image at the LEGO newsroom).

In constant currency, consumer sales grew 1 percent, largely in line with revenue growth, reflecting the fact that the Group entered 2018 with healthy inventory levels. Revenue for the period was flat compared with the same period in 2017, and operating profit grew 4 percent.

The LEGO Group CEO, Niels B Christiansen said: “Our plan for 2018 is to stabilize the business and invest to create growth in the longer-term. These results show we’re on track and we are encouraged by the early progress. They are due to strong execution by our market teams and compelling innovation, including the successful launches of new products such as the LEGO Creator Roller Coaster, the Jurassic World range and the LEGO Technic Bugatti Chiron. While we are encouraged by the progress we are making, there is more to do, and it will take time to return to sustainable growth.”

“We are especially satisfied with our performance given the challenges of the changing retail landscape, including the closure of Toys’R’Us in the US, UK, and Australia. We are well positioned to capitalize on new opportunities to delight consumers and shoppers across all channels and are particularly encouraged by growth from activities across digital and e-commerce platforms. We will continue to work closely with our retail partners and in LEGO-branded retail channels to create great experiences for consumers whenever and wherever they want to shop or play.”

Performance in established markets was stable compared with the same period in 2017. In constant currency, revenue in Western Europe grew low single digits, while revenue in North America declined slightly, in part due to the changes in the retail landscape. China continues to perform strongly, with revenue growing double-digits in the first six months of the year.

Operating profit in DKK terms was 4.2 billion compared with 4.4 billion in 2017, a decline of 4 percent, driven by the impact of the weaker US Dollar. The LEGO Group continues to build a strong foundation for longer-term growth, reinvesting savings from organization adjustments to product and experience innovation and channel development. The company also continues to expand in strategic markets and will open two flagship stores in China in the coming year; one in Shanghai in September 2018 and a second in Beijing in early 2019. It will also continue to develop its partnership with Tencent, one of China’s largest internet service companies, and follow the successful launch of its video channel in May, with a games product in the second half of 2018.

During the first half of the year, the top-performing themes were LEGO Technic, LEGO Ninjago, LEGO Creator, and LEGO Classic. LEGO City and LEGO Star Wars also continue to be amongst the Group’s biggest themes. LEGO BOOST, which combines building, coding, and robotics for younger children, continues to do well. Meanwhile, LEGO Life, a safe digital platform where children can share their LEGO creations in a positive and supportive social media environment, continues to grow and currently has more than four million users in nearly 30 countries.

Christiansen said: “LEGO play is about the endless possibilities of the brick, and that will always be our focus. But, we also see exciting potential to bring to life in new ways through blending digital and physical play. For example, we recently launched LEGO DUPLO trains and a LEGO Batmobile which use an app to create new, fun ways to build and play.”

The LEGO Group also remains committed to its ambition of reaching more children around the world. Christiansen said: “We appreciate the great contribution all our colleagues made to stabilize our business. After a challenging 2017, they have shown incredible dedication to deliver on what we set out to achieve and fulfill our ambition of bringing LEGO play to many more children around the world. We believe in the benefits of LEGO play to help children develop critical life-long skills, such as collaboration, creativity, critical thinking and problem-solving. Children today will create a future we are only just imagining, so we believe it’s important that they are equipped with skills to help them achieve their potential. That is why our mission, to inspire and develop the builders of tomorrow, drives us every day.”

As you can see, there are some plusses and minuses mentioned in this report, but it seems like LEGO is moving in a direction they are happy with and they continue to be vigilant, calculating and cautiously optimistic. The demise of Toys’R’Us severely affected the toy market, and the 2018 Christmas season will be the first where Toys’R’Us is not a major player. It has been recently reported in major news channels that Wal-Mart is planning to significantly increase their toy inventory both in stores and online before the holiday season, and we can expect other retailers to follow suit as well. And, of course, there is Amazon for online shoppers. (As a side note, it’s interesting that Mattel just closed down their online store, and they are planning to sell through retailers only.)

I also found it curious that LEGO’s financial report mentions LEGO Technic as one of the top-performing themes. While LEGO Technic is appreciated by more mechanically inclined LEGO fans, I have never heard it being referred to as one of the most popular LEGO themes. Also, it’s unusual not to see LEGO Friends mentioned amongst the top performers. We will have to wait until after the end of the year to get a full picture of how 2018 turned out for the LEGO Group and other toy manufacturers, but nonetheless, this half-year report gives us a glimpse of what happened so far, and what we can expect for the rest of the year. These are uncertain times for the toy industry, and whoever can navigate the stormy waters carefully will only get stronger and more experienced. Hopefully, LEGO will be one of the successful ones.

What do you think? Did anything interesting stand out for your from LEGO’s financial report? How do you think they will do for the rest of the year? Feel free to share and discuss in the comment section below! 😉

Next post: The story of the LEGO minifigure – Part 2