by Thita (admin) on September 5, 2018
in Featured LEGO Creations

Earlier this year, LEGO released the #42083 LEGO Technic Bugatti Chiron, a 1:8 scale replica model of the real luxury sports car, and managed to cram in some of the original features like the aerodynamic bodywork with an active rear wing, spoked rims with low-profile tires, detailed brake discs, W16 engine with moving pistons, 8-speed gearbox with movable paddle gearshift, steering wheel bearing the Bugatti emblem, storage compartment with a stylish Bugatti overnight bag, and more. (You can read more about the set here: LEGO Technic Bugatti Chiron Available Now!) Since then, LEGO built a real, working 1:1 scale replica of the Bugatti Chiron, and even took it to a spin on the same German track where Bugatti does their testing. Below are some details and demonstration videos about this stunning model as well as how it was built. Watch and be amazed! 🙂

The idea to build a real-size 1:1 LEGO Technic version of the Bugatti Chiron originated within the LEGO Technic design team. Designer Aurelien Rouffiange and the team had just completed the 1:8 scale model of the Chiron and began to debate what the ultimate challenge for the LEGO Technic building system would be. A full-size, self-propelled vehicle seemed to provide the toughest test. 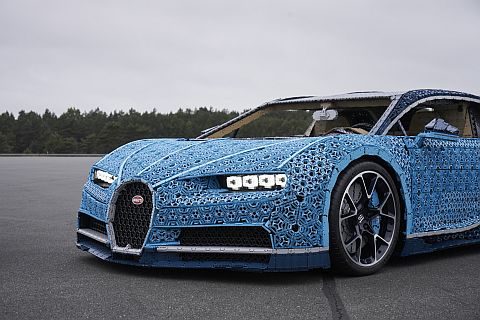 If you want to build large-scale models in LEGO elements, then the place to go is the LEGO facility in Kladno in the Czech Republic. These LEGO designers specialize in creating complex models for LEGO stores and LEGOLAND parks around the world. If anyone could make the idea of a full size LEGO Technic Bugatti Chiron a reality, it was them. They quickly put together a core team of 16 specialists, including design, mechanical and electrical experts, and used over 13,000 man-hours creating the car piece by piece. 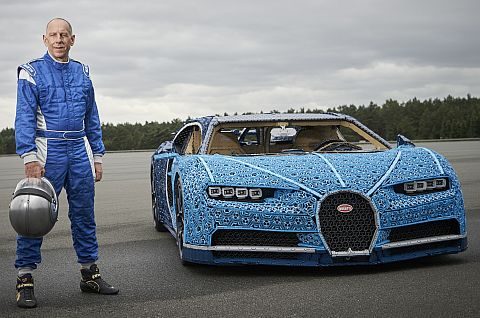 It’s one thing to dream of creating a 1:1 drivable Bugatti Chiron in LEGO Technic, it’s another to make it actually happen. Months of development and testing came to a head in June on the Ehra Lessien test track outside Wolfsburg, Germany – the same track where the original Bugatti Chiron was tested – when we found out if the car would actually drive. We were even more excited when Bugatti’s official test driver and former Le Mans winner, Andy Wallace, agreed to test-drive the Technic version of the Chiron on its first drive.

To get the full story behind the creation of this amazing real-size LEGO Technic version of the Bugatti Chiron, LEGO released a second video, where you can learn how the engineers and the designers overcame challenge after challenge to recreate the real Chiron – and make it drive using only LEGO Power Function motors!

What I like the most about the life-size LEGO Technic Bugatti Chiron is the beautiful honeycomb style skin. The flexible design doesn’t just allow to recreate all the subtle curves of the Bugatti, but it is also stunningly beautiful and artistic. And look at all those LEGO Power Functions motors, gears, and translucent LEGO Technic pieces! This is like a LEGO Technic builder’s dream! 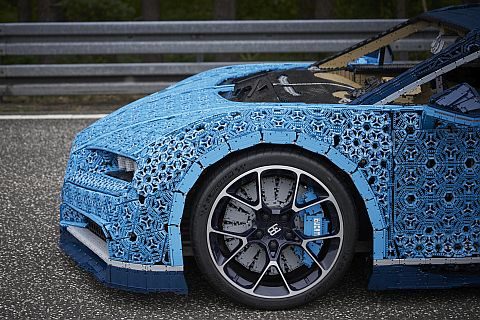 I don’t know what LEGO is planning to do with the Chiron now that it is built, but it would be wonderful if they would take the car on a world tour and show it off at different locations. This is a model that many LEGO fans would love to spend time checking out personally. As a second best option, you can also take a look at the #42083 LEGO Technic Bugatti Chiron at the LEGO Technic section of the Online LEGO Shop. 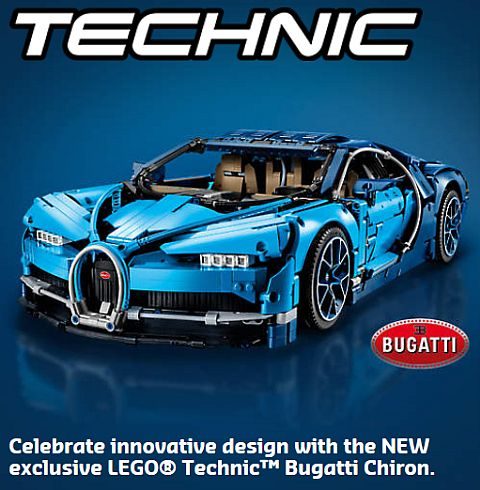 What do you think? How do you like the life-size LEGO Technic Bugatti Chiron? Are there any interesting details that you noticed from the videos? Feel free to share and discuss in the comment section below! 😉