Three new LEGO sets were released for Minecraft fans that we haven’t talked about yet, and there is also a LEGO Minecraft BrickFanz pack with a very cute Steve and even cuter Creeper. LEGO Minecraft is a very popular theme both with Minecraft fans and those who are looking for basic building bricks in nice earth-toned colors. So, let’s take a closer look at the latest new sets. 🙂 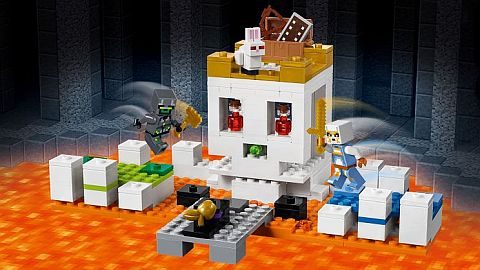 ➡ #21145 LEGO MINECRAFT THE SKULL ARENA: This is the smallest of the new sets, that mostly works well as an add-on to some of the other LEGO Minecraft sets. It features a large skull-shaped structure as the main attraction in the middle of a lava arena, with a green and blue player podium at the sides. Players suppose to dodge the slime shooter and defeat their opponent to claim the golden apple, and battle the killer bunny to get the healing potions and a chest containing a shield and bow. The three characters included are two minifigs with unique Minecraft skins, and a brick-built killer bunny. Measures over 4” (11cm) high, 9” (24cm) wide and 6” (16cm) deep. 198 pieces. Price: $19.99 – BUY HERE 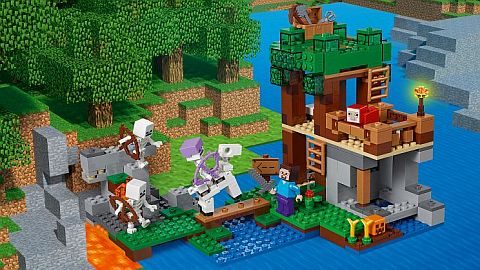 ➡ #21146 LEGO MINECRAFT THE SKELETON ATTACK: This set works much better as a stand-alone than the previous one, and of course, if can also be added to other LEGO Minecraft sets. It features a buildable 3-level shelter with a crafting table, bed, furnace, chest, flames, fence, crops, 2 ladders and an opening trapdoor. You can shear the red sheep to yield a red wool block, craft a stone sword and prepare for battle, look out for the skeleton horseman, and activate the trapdoor function to sink the skeleton invaders. And, like with most of the LEGO Minecraft sets, you can easily swap building sections to redesign the layout. As far as characters, you get Steve, a skeleton horseman, two additional skeletons, and a red sheep. Measures over 6” (16cm) high, 10” (26cm) wide and 7” (19cm) deep. 457 pieces. Price: $39.99 – BUY HERE 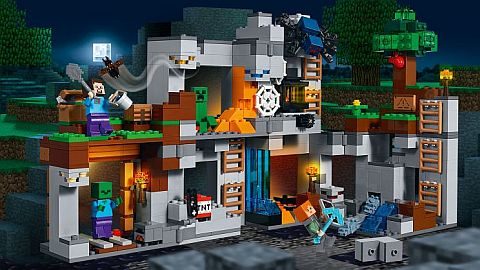 ➡ #21147 LEGO MINECRAFT THE BEDROCK ADVENTURES: This is the largest of the new LEGO Minecraft sets, featuring the depths of the Minecraft Overworld. The different mine and bedrock levels are connected by a series of ladders, and there are also water and lavafalls. Here also, you can easily swap the modular sections to redesign the layout in a number of configurations. Your character can activate the TNT function to mine obsidian and 7 types of ore, and venture through caves while trying to avoid an array of hostile mobs, including a cave spider, zombie, Creeper and silverfish that spawn when you mine the rock face. Check out the video-review below by JANGBRiCKS to see all the play-features in action. It’s also worth noting that the silverfish is a very interesting new design and is unique to this set. Included characters are Alex and Steve, plus a Creeper, cave spider, zombie, bat and two silverfish. The Bedrock Adventures set measures over 7” (20cm) high, 13” (35cm) wide and 5” (14cm) deep. 644 pieces. Price: $89.99 – BUY HERE 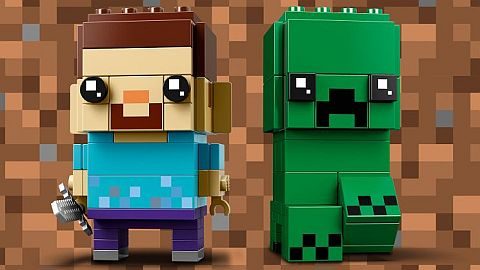 ➡ #41612 LEGO BRICKHEADZ MINECRAFT STEVE & CREEPER: From all the new BrickHeadz characters these little guys are some of my favorites. The BrickHeadz style matches the Minecraft style really well, ending up with two adorable characters. All the decorations are printed, and Steve comes with a standard LEGO Minecraft diamond sword. There is not much playability with BrickHeadz characters, but they are fun to build and look great on display. LEGO also suggests to “mash up your LEGO BrickHeadz construction characters to create supercool hybrids or your own amazing characters”. I haven’t seen anyone do this yet, but I suppose it could be fun. 160 pieces. Price: $19.99 – BUY HERE 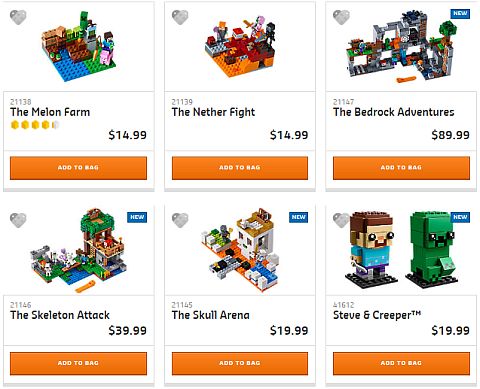