LEGO stop-motion animators BrickBrosProductions have been releasing a series of videos that became very popular titled LEGO In Real Life. In the videos, the brothers replace real world object with LEGO-built versions. While the videos are great entertainment and enjoyable to watch, they are especially interesting for brickfilmers. It’s rare to see LEGO animation where real life object and LEGO objects interact in a back-and-forth fashion. Most animators will choose to either depict everything with LEGO bricks, or use some non-LEGO objects as props and backgrounds for their brickfilms. The constant switching between real world and LEGO objects gives these videos a surreal feel while still remaining fun. 🙂 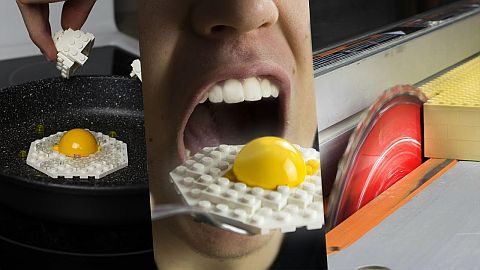 The first video was produced about a year ago, depicting one of the brothers making breakfast, replacing all the food items with LEGO-built versions. The interaction and smooth switching between LEGO and real world objects is fascinating to watch. Also, notice the subtle but very convincing use of sound effects, produced by the brothers themselves. The second video takes the simple story of making breakfast to the next level, but this time the human player becomes conscious of the switch-up, driving him almost mad. The recently published third video takes the back-and-forth teasing up yet another notch; now real life objects are used (wood, tools, paint, etc.), which turn into LEGO versions of the same objects, to make a LEGO object that is actually made of wood and then comes to life! Confused? Don’t be! Both the idea and the execution are brilliant! In the video-player below, you can watch all three films, as well as a combined version.

For LEGO fans, one of the most interesting parts of brick-films is to see how they were made, and maybe even pick up some tips and tricks along the way. BrickBrosProductions shares two behind-the-scenes videos, where they reveal some of the techniques, tools, equipment, props, and software used for making the videos. They also share that the first video took three days of filming and 1,500 pictures, and the last video took one week of filming and 2,710 pictures (all three videos use 15 frames per second). Animation for the third film took another week with approximately three and a half hours of work per day.

The wooden LEGO duck depicted in the third video is a brick-built version of one of the first toys LEGO released back in 1935. The brick-built version was designed by LEGO fan Jason Allemann. Instructions are available at his website at JKBrickWorks.com. If you are interested in LEGO animation and would like to try it yourself, or if you are already a budding animator but would like to pick up some advanced skills, I highly recommend The LEGO Animation Book by David Pagano and David Picket. You can read my review on this book here, and purchase it on Amazon. 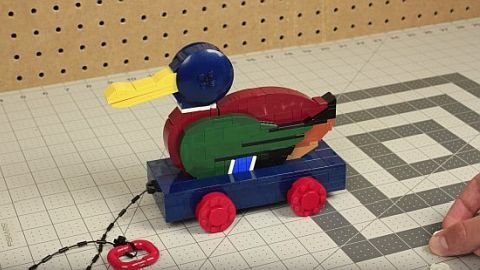 What do you think? How did you like these LEGO stop-motion videos? Did you notice any interesting techniques that you haven’t seen before or you would like to try? Feel free to share your thoughts and discuss in the comment section below! 😉