For those who don’t know me, I’m a big fan of LEGO-brand building bricks. Several years ago, I put together a “brochure” that describes my make-believe miniature town called “Legoland” A few years later, I revised it, adding more details about this place that I’ve created in my home, built out of thousands of little plastic bricks (images from 1970s LEGO catalogs). 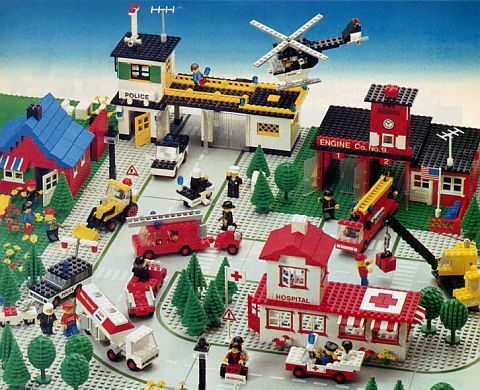 As a child, I did not know of LEGO, but I had plenty of other toys! In the construction category, I had Tinker Toys, wooden Lincoln Logs, and when I was a little older, an Erector set. But my main childhood toy, which stayed with me a lot longer than with other kids, was toy soldiers. Unlike other kids, who mainly view their army in battle, my army was very peaceful. At one time half my bedroom was set up as an army fort, Fort Yafa, named after my sister, Yafa. The buildings were made almost exclusively from tissue boxes simply placed on their sides.

My fort had a fire department, a quartermaster unit, a military police unit with a jail, and other standard units of a modern military base. There was also a construction unit and a communications squad. Eventually, I even added a navy and small air force. One summer in camp, I built and painted a wooden dock structure on a piece of plywood during shop class. That provided dock space for three small naval vessels. Scale was of no great concern, although I remember regularly rejecting toy soldiers that were much smaller and cheaper. The soldiers couldn’t actually fit in most of the tanks, and my air force men certainly towered over the model (Revell/Monogram) plastic planes that made up my air force. (Buying and building small airplane models became a small sub-hobby.) 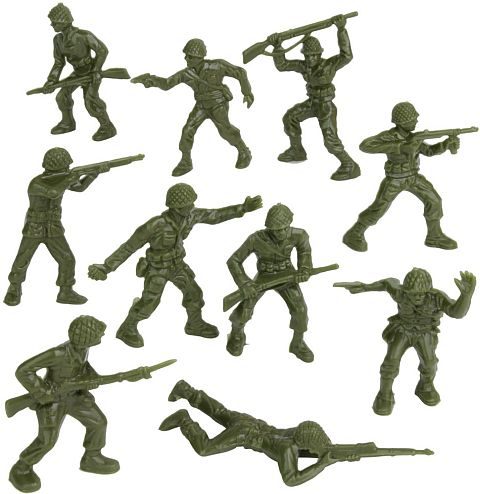 There were jeeps, some pulling cannon, armored personnel carriers, tanks, and several amphibious vehicles. There were also troop carrier trucks and even an auto/tank carrier vehicle. The vehicles came from different sources, but most of the soldiers came from Processed Plastics and Tim Mee Toys (see image above). There was a large variety: riflemen that were prone, crawling or kneeling, minesweepers, radio operators, and others. A different company provided troops with hands like LEGO minifigures to which you attached provided guns. Those soldiers came with hats and armored jackets that they needed to be dressed in.

Fort Yafa also had a small rubber fire truck with several firemen, a big metal bulldozer (that, not knowing it was for me, the storekeeper warned me was not for little kids), and several dump trucks. In one corner, there was a separate missile base, with treaded mobile armored missile carriers, as well as stationary launchers. Another corner had an old Marx toy metal garage that served as the basis of my motor pool. To some extent, I was playing “urban developer” – no different then what kids and adults do today with LEGO. My soldiers had parades and lineups – but no real wars. There were never any ‘bad guys’. Whenever the opportunity (and money) presented itself, I purchased toy soldiers and their vehicles. It was a real obsession. I spent hours alone in my room, playing with toy soldiers. Some of them are still stored away in my basement.

Like for many recently married young couples, we lived in an apartment and money was tight. Once my daughter was born, my wife returned to work only part-time – her mom watching the baby one day and me the other. I was in graduate school and trying to make a living teaching part time in several colleges. 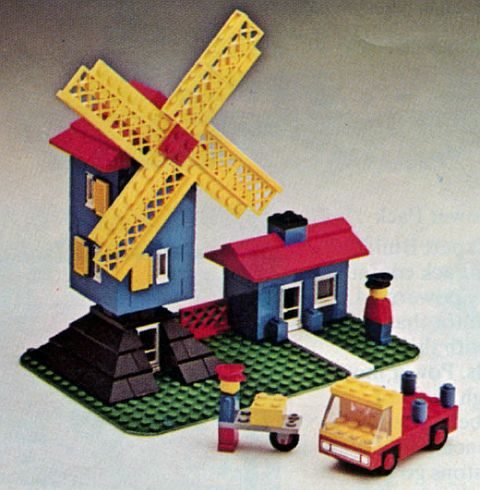 In March 1979, soon after my son Jeremy was born, we purchased a nearby house. In the attic were two nice sized rooms, one for my study and the other earmarked as a playroom for the kids. The playroom was an L-shaped room with an ancient (unconnected) gas heater near the door, and a sloped ceiling on two sides. My brother-in-law painted one sloping wall with large Sesame Street figures. The other walls we painted orange – a perfect playroom. We even had two little kids’ wooden chairs, which were painted orange. 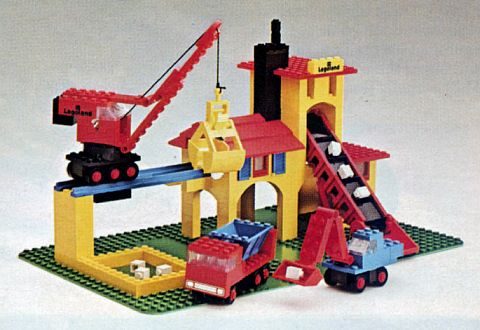 Anyway, in addition to the original LEGO birthday present, I soon purchased another LEGO set for my daughter that we played with together. Then there was another one. And another. Among the early sets I purchased (from a large now defunct Brooklyn toy store on Nostrand Avenue called Thrift Town) were the #570 LEGO Fire House, the #550 LEGO Windmill, and the #580 LEGO Brick Yard (these were originally called LEGOLAND Enviro Models), a few cars and trucks, as well as several more LEGO Universal Building Sets. A few of the bigger sets had the earliest versions of minifigures with outlines of legs and arms that didn’t move. A small, but growing corner of the kids’ bedroom became a place for LEGO. My son remembers sneaking out of bed to play with LEGO at night, and of my wife getting upset when she stepped on LEGO as she came to check on the kids in the darkened bedroom. 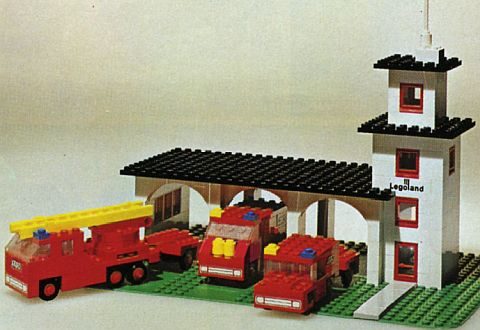 We soon moved the brick collection up to the attic. In one corner we set up the relatively few LEGO sets we had – at first very slowly adding to the collection, building and rebuilding the different sets. At one point, I took some brown wrapping paper and drew roads with a black marker. That was our first LEGO city!

I hope you enjoyed this story. Next time, I will tell you more about building up our city, Legoland. Your comments, questions, and feedback are welcome. Thanks for reading! 🙂