The month of October is bringing us new LEGO sets and promotions, and we are also getting a number of holiday sets for Halloween, Thanksgiving and Christmas. Below, we will take a look at all the new sets for this month, as well as the special promotional offers you can take advantage of. 🙂 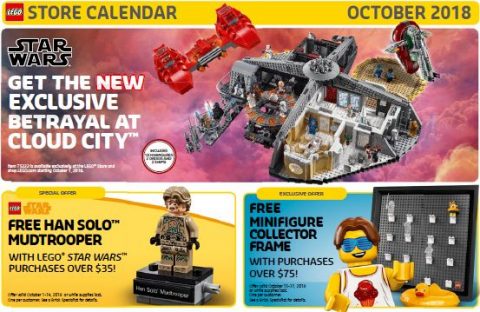 ➡ FREE LEGO STAR WARS HAN SOLO MUDTROOPER: During the first part of the month (October 1-14), you will get a free #40300 LEGO Star Wars Han Solo Mudtrooper with LEGO Star Wars purchases of $35 or more. This is a fantastic offer with a unique minifigure, and a perfect freebie to go along with any of the new LEGO Star Wars sets. To check out the full selection, visit the LEGO Star Wars section of the Online LEGO Shop. 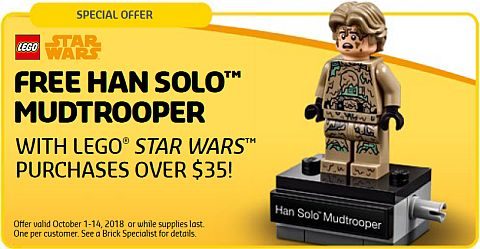 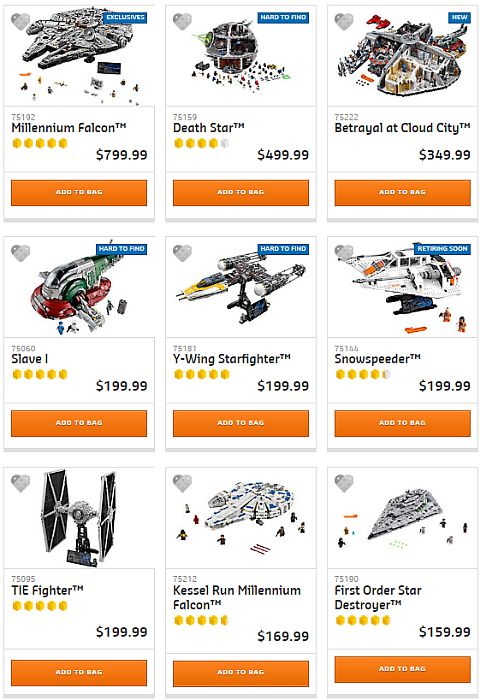 ➡ FREE LEGO MINIFIGURE COLLECTOR FRAME: During the second part of the month (October 15-31) you will get free LEGO Minifigure Collector Frame with purchases of $75 or more. LEGO has been releasing frames like this for some time now, but if you don’t have one yet, this is a good way to get one for free and try it out. This offer is valid on all purchases at official LEGO stores and the Online LEGO Shop. 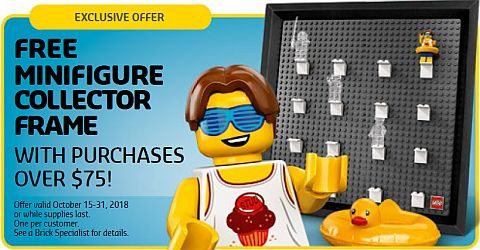 ➡ DOUBLE VIP POINTS: LEGO is offering Double VIP Points on select sets for a couple of days next week (October 8-9). Which sets will be offered with Double VIP Points is not yet known, but we will keep you updated. You can also check at the homepage of the Online LEGO Shop.

➡ LEGO STAR WARS BETRAYAL AT CLOUD CITY: The #75222 LEGO Star Wars Betrayal at Cloud City set is available now for everyone, not just LEGO VIP members. This 2,812-piece set is the first in the LEGO Star Wars Master Builder Series with a focus on playability and lots of great details. For more information see links at the end of this post to the press-release and full review of the set. If you are ready o purchase, visit the LEGO Star Wars section of the Online LEGO Shop. 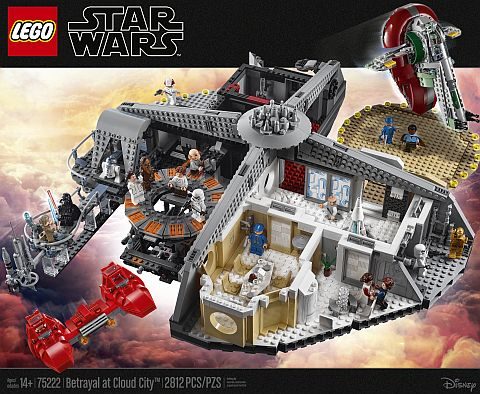 ➡ LEGO STAR WARS PORG: A set that just sort of showed up all by itself this month is the #75230 LEGO Star Wars Porg sculpture. Here is the official description: Own an unmistakable character from Star Wars: The Last Jedi! This faithfully detailed Star Wars toy includes intricate feather detailing, authentic colors and an opening mouth and flapping wings when you press the tail. The set also comes with a display stand with decorative fact plaque and extra porg mini build, to form the perfect centerpiece for your LEGO collection. Porg without stand stands over 7” (19cm) high. Display stand measures approx. 2” (6cm) high and 1” (3cm) deep, and over 4” (11cm) wide. 811 pieces. Price: $69.99. Available at the LEGO Star Wars section of the Online LEGO Shop. 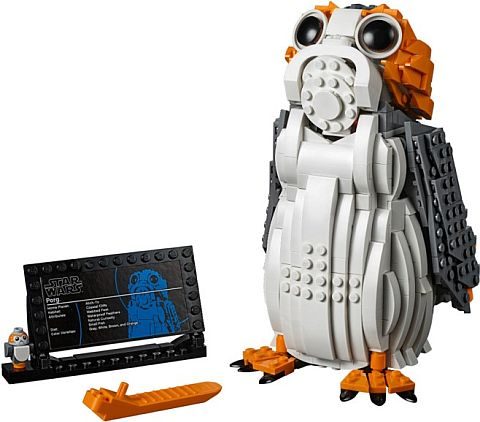 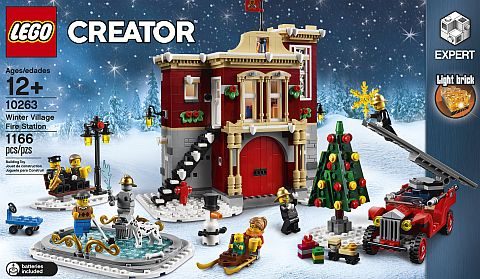 ➡ LEGO CHRISTMAS ADVENT CALENDARS: The three new LEGO Advent Calendars became available last month, but I thought to mention them again as we are getting closer to the holiday season. LEGO traditionally releases three advent calendar sets for Christmas; one in the LEGO City theme, one in the LEGO Friends theme, and one for LEGO Star Wars fans. The sets are packaged in special boxes with opening windows for each day of December counting down to Christmas. Behind each window there is a small LEGO build, minifig, or accessory that kids can enjoy while also building up the anticipation for Christmas. This year, the three sets are the #60201 LEGO City Advent Calendar, the #41353 LEGO Friends Advent Calendar, and the #75213 LEGO Star Wars Advent Calendar. All three of them are now available at the Online LEGO Shop.

➡ LEGO HOLIDAY ORNAMENTS: There are a couple of brick-built Christmas ornaments for this year; the #853796 LEGO Penguin Holiday Ornament and the #852815 LEGO Gift Holiday Ornament. Both little builds can be placed in the included transparent plastic bauble, and hang it up with a red ribbon (also included) to make a perfect Christmas decoration. They are available at the seasonal items section of the Online LEGO Shop. 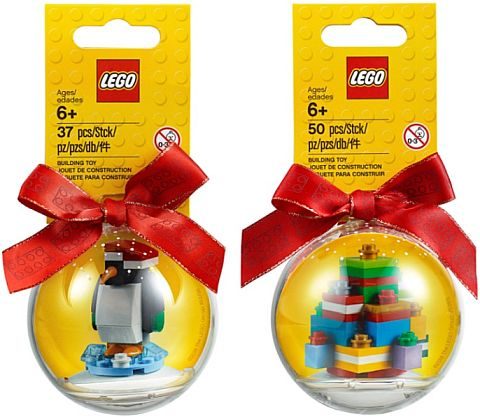 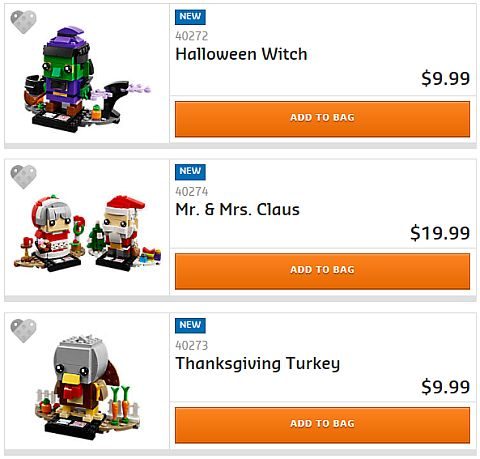 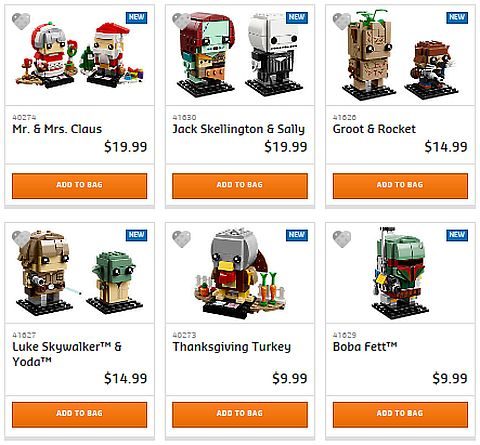 ➡ LEGO-XTRA PLAYMATS & ACCESSORY PACKS: There is a new line of LEGO accessory packs called LEGO-xtra, which currently include three playmats, and several small parts-packs. The #853840 LEGO-xtra Road Playmat, the #853841 LEGO-xtra Sea Playmat, and the #853842 LEGO-xtra Park Playmat feature two 10 inch (25cm) square laminated, double-sides playmats with printed graphics, buildable connectors, and some starter elements for $7.99 each. And the LEGO-xtra accessory packs come with additional pieces to use with the playmats, or just to build up your loose parts inventory. The packs include the #40309 LEGO-xtra Food Accessories, the #40310 LEGO-xtra Botanical Accessories, the #40311 LEGO-xtra Traffic Lights , and the #40313 LEGO-xtra Bicycles. They are $3.99 each. Both the playmats and the accessory packs are available at the LEGO X-tra section of the Online LEGO Shop. 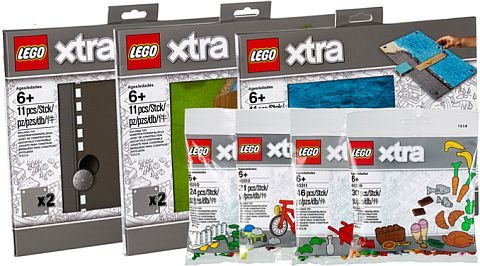 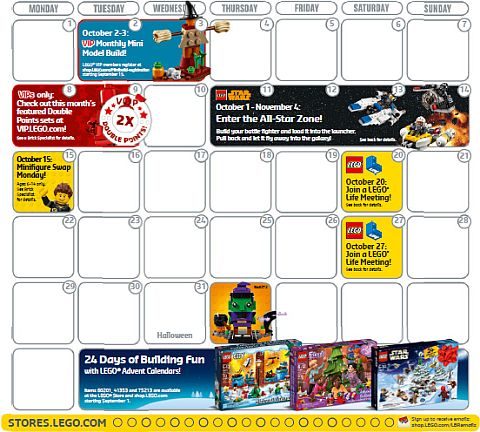 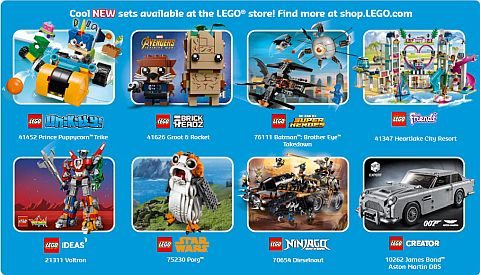