by Thita (admin) on November 5, 2018
in Community Articles

Today, I will continue sharing with you more of my own personal story in the LEGO hobby. Last time, we left off with the humble beginnings of our LEGO city, called “Legoland”. This time, I will talk more about the growth and expansion of the city as we added more LEGO sets and our own creations. I was also able to dig up some old pictures from 1992-1996, which I’m including just below and towards the end of this article. If you would like to read the first part of this series, you can find it here: My LEGO City: A Personal Story – Part 1. Now, let’s continue… 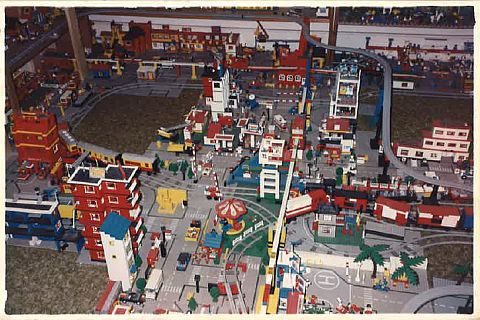 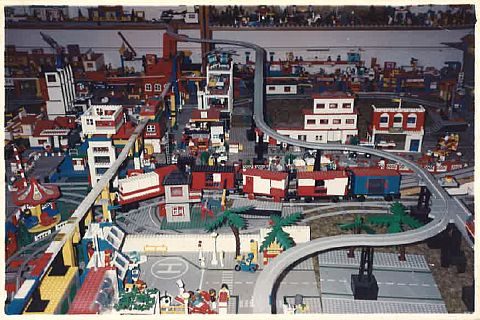 We regularly added LEGO, but it was a lot easier to afford (or sneak in) a police car than an entire police station. But, there were plenty of town buildings purchased and built, even during the earlier years. There was the #6363 LEGO Town Auto Repair Shop, the #6364 LEGO Town Paramedic Unit (basically a doctor’s office), the #361 LEGO Town Garage, the #379 LEGO Town Bus Station, and the #6362 LEGO Town Post Office (the latter three I believe we imported from Europe). There were also several townhouses with hinges that allowed them to be folded, like the #560 LEGO Classic Townhouse. Bigger sets followed, including the #6383 LEGO Town Public Works Center and the #6375 LEGO Town Exxon Gas Station. That was later supplemented by the #6371 LEGO Town Shell Station, and eventually the #6548 LEGO Town Octan Gas Station. Then there was the slightly oversized #780 LEGO Road Construction set (I purchased two), the #456 LEGO Spirit of St. Louis plane, the tiny #430 LEGO Biplane, and I can’t remember how many trucks of different vintages and uses. (Images from old LEGO catalogs and Brickset, links are to the Brickset database). 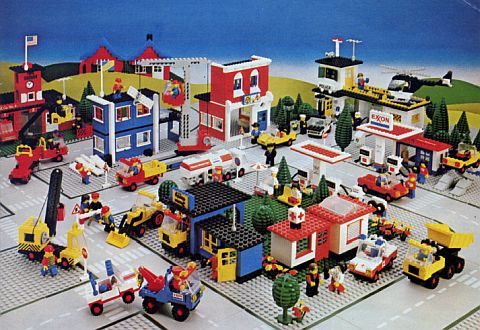 Over time, the playroom had ever more LEGO and fewer other toys. Soon there were two more children, Robin and Ira, joining in the fun. I built some shelves along the sloping wall to add space for more buildings. Eventually the brown wrapping paper gave way to official road plates (#551 LEGO Junction Roadplates, #552 LEGO Curved Roadplates, #553 LEGO Straight Roadplates). 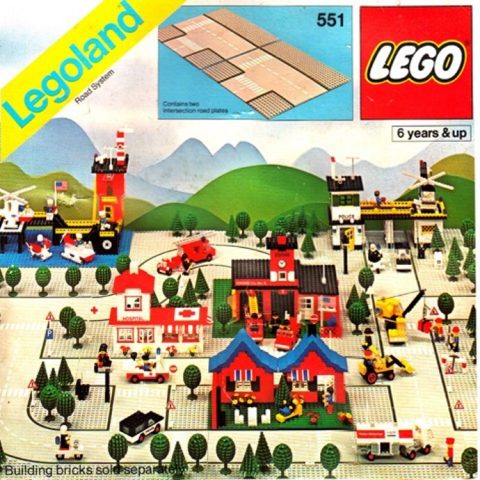 There were also more than several additional LEGO Universal/LEGO Basic Building Sets that were added over the years; the #720 LEGO Basic Building Set is one that comes to mind. Some of them had parts (like odd corner panels) that made for interesting buildings. Remember, we’re talking about a period of about twenty years and a family with four kids, so the number of sets kept growing. There are some sets that I can see clearly in the few pictures I have of our early layout, and there are others that I might see in a catalog and I’m not sure if I owned them or only dreamed of having them. 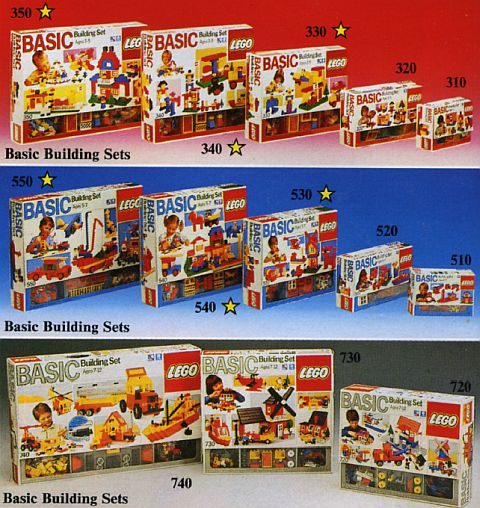 In the meantime, my education and career were advancing. I got hired for a full-time position at a local college. My wife swears that I could never have finished my doctoral dissertation, if I didn’t have LEGO to take a break and relax with. 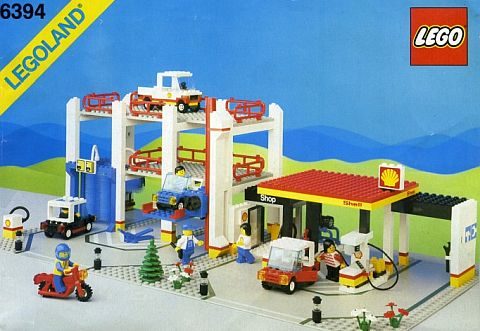 Soon there was a homemade non-powered monorail that went across town, mostly built on support beams. I purchased a number of tiny #455 LEGO Learjet sets that must have been on clearance or just very cheap. They were too small for minifigures, but were built of mainly 2xX white plates. Dozens of the plates, interconnected and topped with white tiles, were the basis for the monorail track. The incline ramp was simply made of 2×3 low-sloped roof pieces. Several open-air but covered passenger platforms served as boarding areas. There were other buildings as well. The #6383 LEGO Town Public Works Center, the #6394 LEGO Town Metro Park & Service Tower, and the #6393 LEGO Town Big Rig Truck Stop topped the list. I purchased four #6380 LEGO Town Emergency Treatment Center sets; one to be used as a hospital, and three as sources of parts – especially big red windows. (A set like that was under $30 back in 1988. Today’s hospital is close to $100.) 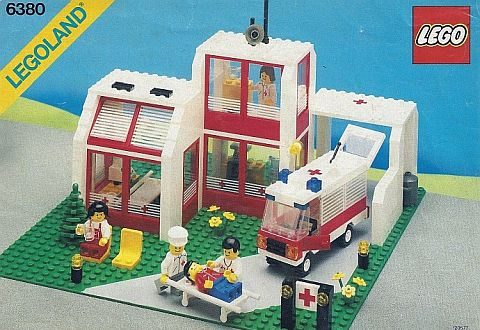 A part of a top shelf was dedicated to an airport. A corner of the playroom became the water area with the #6540 LEGO Town Pier Police and #6387 LEGO Town Coastal Rescue Base to patrol the waterfront. I purchased two large ships (#4020 LEGO Fire Fighter, and #4030 LEGO Cargo Carrier), and several smaller boats. 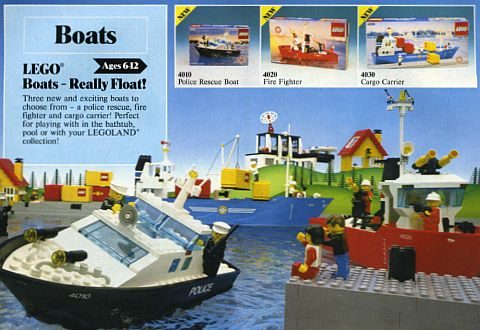 I freelanced several buildings including a school, some stores, and several private homes. Buildings from idea booklets and eventually the internet were sources of inspiration. While I was buying mainly town sets, an occasional small LEGO Pirate or LEGO Castle set would sneak in. The ones that could be repositioned as town sets were especially welcome. My older son complains that LEGO Pirate and LEGO Castle sets that he received as birthday presents soon had their hats exchanged for LEGO city hats, so that they could better fit in on the layout. More generally, he believes that the presents he received were based more on the sets that I wanted than what I thought he would actually enjoy. That’s probably still a complaint against me today, when the grandsons get LEGO City sets while they would prefer LEGO Legends of Chima or LEGO Ninjago.

When I saw a really good deal, I developed the habit of buying two, or even three of the same set, building one and putting the other two away in a closet. Sometimes I’d even buy a set that I didn’t need at all – if I thought I was getting a great deal. So I ended up with a few more knight sets including the #6040 LEGO Castle Blacksmith Shop, the #6048 LEGO Castle Majisto’s Magical Workshop, the #6043 LEGO Castle Dragon Defender, and the #6054 LEGO Castle Forestmen’s Hideout. Most of those sets are long gone, but the forestmen still serve as park rangers on my current layout. 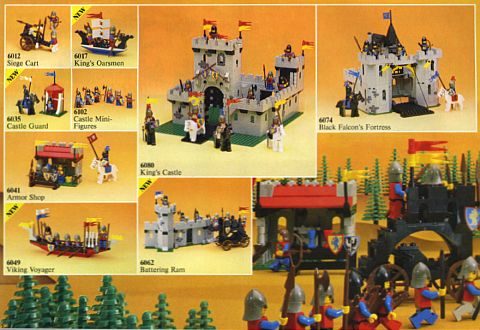 There were also a couple of original space vehicles, like the #6894 LEGO Space Blacktron Invader, the #6844 LEGO Space Sismobile, and the #6827 LEGO Space Strata Scooter to name a few, some LEGO Johnny Thunder sets, and, much later, a few LEGO Harry Potter sets, and even a some LEGO Star Wars sets. 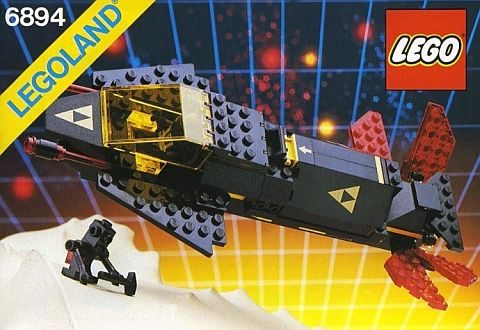 My son (or I) became interested in the LEGO Pirates theme. Sets acquired included the #6270 LEGO Pirates Forbidden Island, the #6265 LEGO Pirates Sabre Island, and the #6256 LEGO Pirates Islander Catamaran. I visualized a pirate-themed amusement park, but it never happened. The highlight was the #6285 LEGO Pirates Black Seas Barracuda ship which is still on display on a living room shelf. Several small LEGO Fabuland animal figure sets went over big with my two younger children. I also tried buying spare pieces packages when they were introduced. It seemed like I could never have enough windows and doors, not to mention fences. 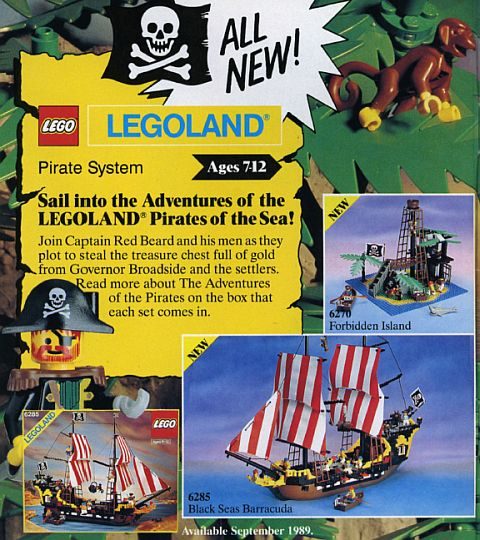 Eventually, I discovered the early LEGO trains, most of which were sold only in Europe. But I purchased a battery-operated four car freight train with grey tracks (I never the blue tracks). I wasn’t going to re-do the layout, so the tracks were lodged between buildings, in a rather random loop that went through the town. I added a non-powered passenger train with short blue and yellow cars (I think it was the #7710 LEGO Push-Along Passenger Steam Train). Then came the #7824 LEGO Railway Station, and a few more grey tracks. I slowly added miscellaneous train cars including the #7813 LEGO Shell Tanker Wagon, the #4537 LEGO Octan Twin Tank Transporter, and the #7817 LEGO Crain Wagon. I also purchased by mail the several of the #489 LEGO Train Signal Post packs, the long #1144 Train Baseplate packs, train wheels, and train magnets to build my own train cars.

As I ran out of space, the town expanded. The dresser surface in the corner became another place to build, so did the door-less closet on the other side of the room. Parks became buildings, buildings were squeezed closer together and there was no more playroom – just a LEGO town. Eventually, a train track ran out of the door and into the hallway, where I added another home-built train station. The #6390 LEGO Town Main Street set, airport shuttle, and LEGO Fabuland merry-go-round all found homes together with my own creations. There were basically four quadrangles with space for kids to sit in the middle of each and play – an urban planner’s worse nightmare! (I do have a few pictures from those days that I will try to find.) It was a real chance for me to get down on the floor and play with my kids. But, like every model railroader or LEGO builder knows, there is never enough room for your layout.

1990 seems to have been a turning point in my town building, or at least that’s where my old inventory list starts a new category. By that time, my youngest son was eight years old, and fully involved with his siblings in my LEGO building. I also became fascinated by LEGO Paradisa (the LEGO Friends equivalent of that era.) There was the #6416 LEGO Paradisa Poolside Paradise, the #6405 LEGO Paradisa Sunset Stables, the #6411 LEGO Parasida Sand Dollar Café, and lots of smaller sets.

The water was always a big theme for me. My big purchases were the #6542 LEGO Town Launch and Load Seaport, and the #6543 LEGO Town Sail N’ Fly Marina. There was also the #6552 LEGO Town Rocky River Retreat with its unique water baseplate, the #6490 LEGO Town Amazon Crossing, and the #6595 LEGO Town Surf Shack. These were besides the usual police, fire, and gas stations and their supplementary trucks. 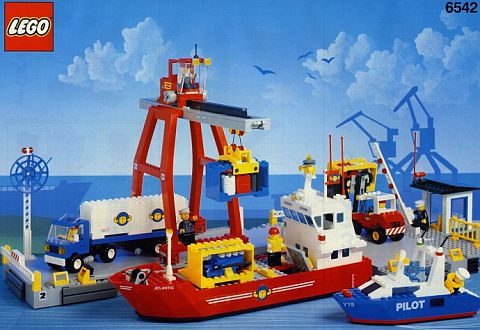 Moreover, what’s a town without people? Besides the minifigures that come with various sets, there were four sets of #6314 LEGO City People spread though town. There were also four and a half sets of #1063 LEGO Dacta Community Workers (one set was shared with a LEGO building nephew). Then there were assorted promotional and holiday sets. We ended up with a half dozen #1625 LEGO Snowmen, a dozen small #1627 LEGO Santas, and four #1628 LEGO Santa with Reindeer and Sleigh sets. 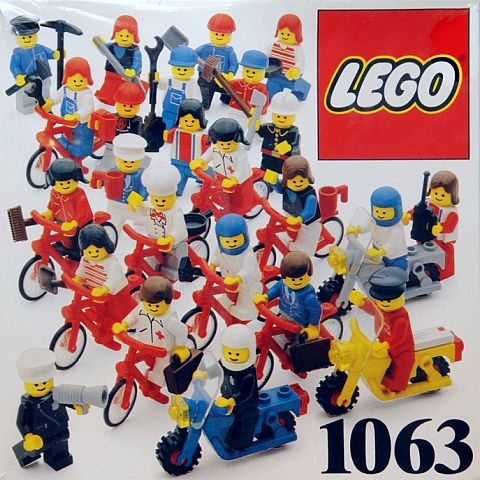 Then there were the endless baseplates; at least a dozen #813 LEGO Green Baseplates, many road baseplates and more. The LEGO Universal Sets became LEGO Basic Sets and then LEGO Freestyle sets. In 1998, there was the 25th anniversary #3027 LEGO Limited Edition Silver Freestyle Bucket with 400+ pieces. I purchased seven – not at one time. There was also another basic brick set of 400+ pieces that came in a purple bucket (#3760 LEGO Anniversary Bucket). I bought ten of those! Then there were the small introductory sets – I must have purchased dozens of those. Here are some more picture of the layout from those days. 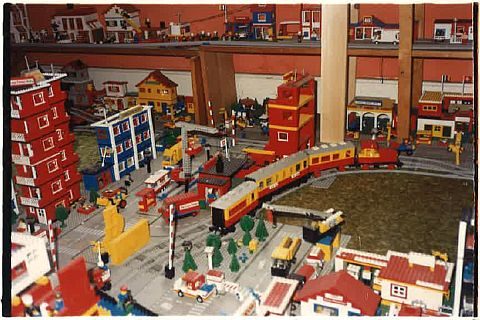 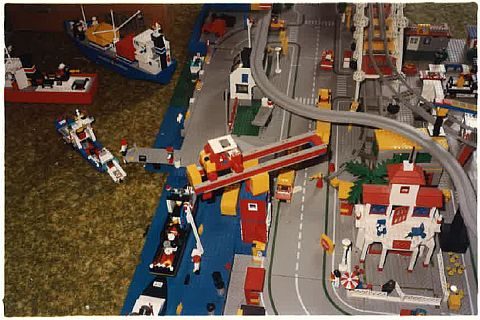 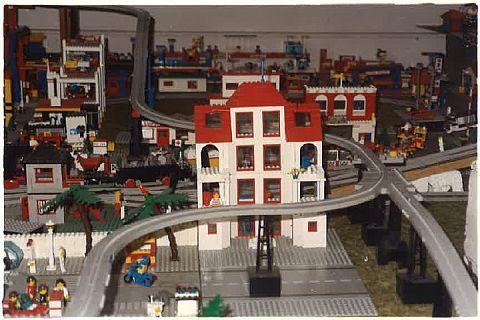 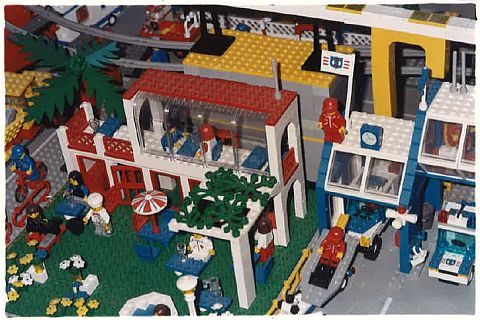 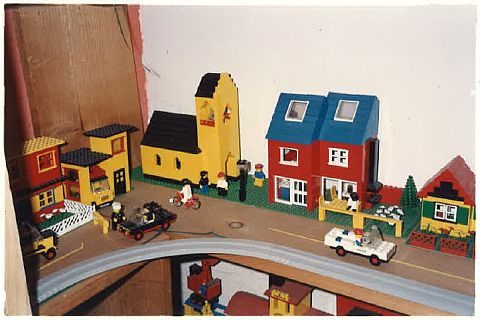 I hope you enjoyed this story. Next time, I will tell you about a major setback, and a new beginning. Your comments, questions, and feedback are welcome. Thanks for reading! 🙂