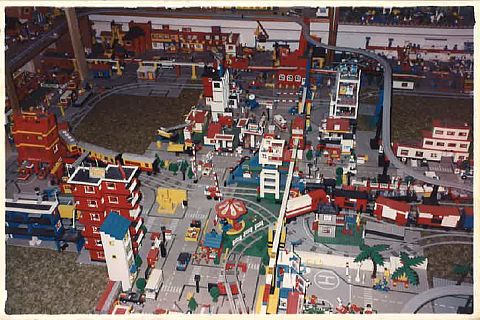 ➡ A MAJOR SETBACK AND A NEW BEGINNING…

In February of 1999, disaster struck our family. The upper part of our house went up in flames. Thank God, nobody was in the house and nobody got hurt. But Legoland (see picture above) took the brunt of the fire. There is nothing more disgusting than burned up and melted LEGO, mixed with the rubble of collapsed ceilings and walls. Remember, most of the layout had been built on the floor. Firefighters in heavy boots stepping on everything and pouring water on the flames didn’t help the situation. 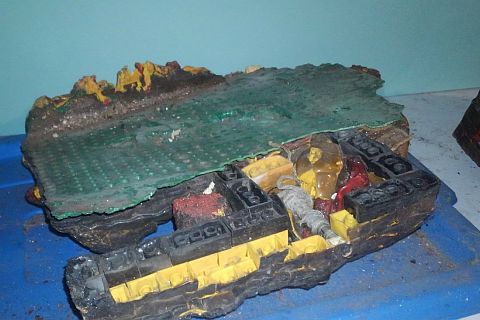 A colleague of mine, Robert, decided against my objections to write a letter to the LEGO Company about what happened, with some pictures from before the fire. They wrote back to him a polite letter that they were sorry, but they were only able to help nonprofit institutions with LEGO. But a few weeks later, the #4217 LEGO Playdesk & Bricks Basic Building Set with 200+ pieces and a playtable/storage unit came in the mail. As I remember, there wasn’t even a cover letter with it. 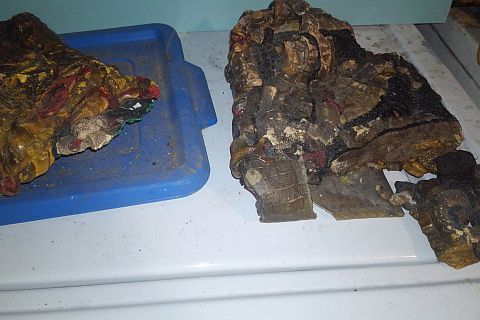 My son, Jeremy, spent hours at a time for months picking through the rubble of Legoland. He salvaged parts of buildings, broken trucks, even semi-intact train cars, and, most importantly, minifigures. He saved hundreds of minifigures’ lives; many still in good condition, and some with permanently melted together legs. Several large tubs of random bricks were also collected by Jeremy, as well as train tracks (some broken, some still usable). Eventually, we separated out the pieces from ash and dirt, sorted them by color, and started washing and drying them (white bricks were the worst, as many got badly stained). Baseplates that were placed flatly on shelves mostly survived. Those that extended past the shelves had their sides melt and fold. Most of the few unopened sets I had at the time were in cartons in the basement. They were quickly moved to a neighbor’s house to escape further water damage. 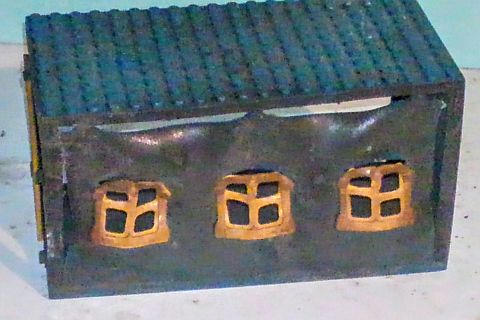 We found a temporary house around the corner to live in. LEGO was the least of our concerns at that time. There were endless issues with the insurance company (because of inflation, we didn’t have enough insurance), and later the contractor. We went looking to buy a new house in the neighborhood, but eventually decided to rebuild. We lived in a small rented house for about two years until we could move back in (December, 2000). Our almost all new house was extended in the front by about 15 feet, giving us an extra room on each level. It also had a full third floor with eight-foot ceilings rather than an attic. There was even a small crawl space above that, where I now store empty LEGO set boxes. My two oldest children had large bedrooms up there, and myself an office with a full wall of floor-to-ceiling bookcases. 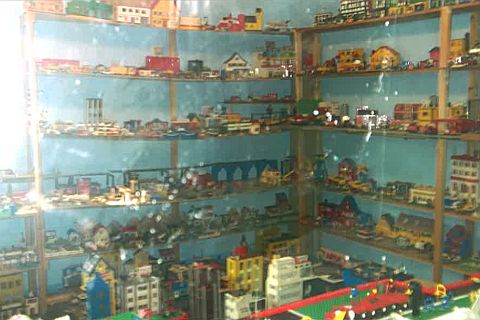 From the beginning, the center room on the upper floor was planned to be a LEGO room with a small picture window between the room and the hallway so people could see the town without actually walking in (see picture above taken through the window). Several electric outlets around the room were connected to a master switch near the light switch, so that I could turn on various plug-in devices from the doorway. The room measures about 13 feet by 15 feet, and, except for some filing cabinets and storage boxes in the corner, it is fully dedicated to LEGO. The walls were painted light-blue to match the sky, and a darker blue carpet covers the floor to use as “water”. Eventually, all of the children left for college and to live their own lives, and while they are always willing to help, the LEGO town became really only my project to plan and play with.

We started rebuilding on a bridge table, then added a six-foot table for town buildings. In some cases, I used old instruction booklets and random pieces to rebuild sets that had been destroyed. Twenty-five years ago, LEGO City sets seemed to have had much less specialized pieces. And, often, a different or more common piece was a reasonable substitute for any specialized ones. Thanks to the instructions, many of the sets lost in the fire have been replaced over the years – albeit in a modified versions. The agreement I had with my spouse was that all the miscellaneous boxes we had (most of which were mine) when we moved back in would go into the LEGO room until they were unpacked. This was a great motivation for me to get the boxes unpacked and stuff put away. Another feature of this room is a set of deep shelves along one wall. Unfortunately, someone had misadvised me, and I used one-quarter inch plywood for the shelves – a mistake I am still paying for. Even though there is only lightweight LEGO on the shelves, they still sag. 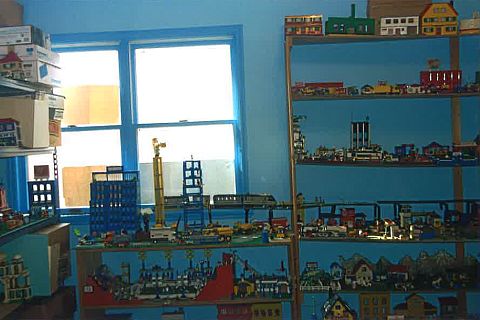 The tables disappeared fairly quickly, and the town got set up on the floor. Soon, another set of home-built shelves was added on one wall, then two deep shelves under the windows. Two plastic shelves placed on a hollow-core door under the picture window looking into the room came next.
About five years ago, when just about all the storage boxes were finally moved or disappeared, the far wall got two industrial shelving units, each with four shelves and about twenty inches deep. More room to build! Just like with the first version of the town before the fire, the layout first came up to the doorway and then out into the hallway (see picture below). For a short while, that section was raised on low box tops to distinguish “land” from “water”. But with little grandchildren visiting the guest bedroom down the hall, I felt that I was asking for trouble. I cleared both the hall and doorway, so the LEGO room door can now close (and lock). 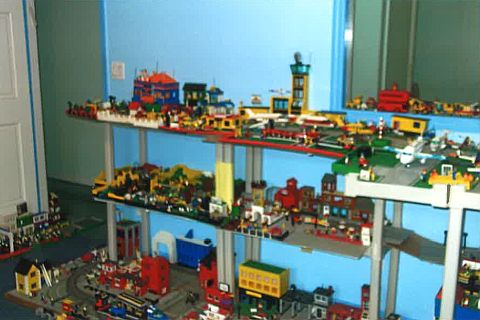 Referring to a large public model train exhibit in Florida, someone once wrote (Model Railroader Magazine, June 1988) “If one individual, working at home, were to build a railroad like this, by the time he got halfway through, the first part would have to be overhauled. It would take an entire lifetime to complete the project. If we (in Florida) had started out planning the project by putting diagrams on paper instead of just jumping in and doing it, it would have taken us longer to plan it than to do it.” 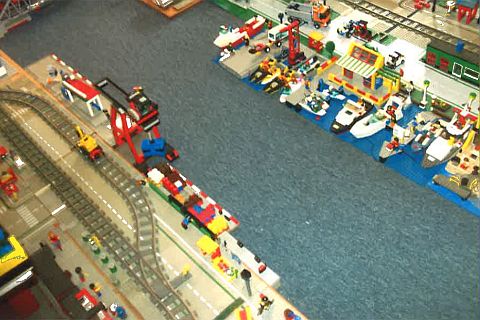 There are times I feel the same about my LEGO city. But that’s my own doing. It’s partly because much of the layout is on the floor, partly because I am sometimes a klutz (all thumbs), and partly because I allow ten-year-old grandchildren to play, build, and move things around. When I fix one thing, I knock over something else. Just trying to deal with the accumulating dust is a major challenge. 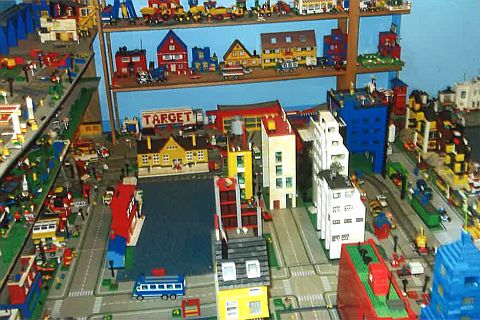 ➡ TYPES OF BUILDINGS IN THE LAYOUT…

The current layout consists of various types of buildings and vehicles, both from official sets and custom builds. Here is a breakdown of the type of buildings and other creations in the city.

If I count only the last three categories as MOCs, I have over 100 MOCs on my layout, which is certainly less than majority of the structures. I don’t claim to be especially good or creative with MOCs. Most of my buildings are modern, which means, almost by definition, no intricate brickwork. 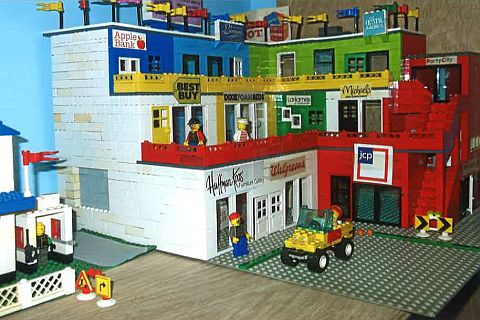 I hope you enjoyed this story. Next time, I will discuss the current layout, and what’s included in my LEGO city today. Your comments, questions, and feedback are welcome. Thanks for reading! 🙂