The last couple of months of the year are always exciting for LEGO fans; there are new LEGO sets, special holiday sets, promotional items, sales, and other interesting opportunities to catch the holiday spirit. Below, we will go through what we know is available for LEGO fans during the month of November, and we will also share updates as we get closer to Thanksgiving and the beginning of the Christmas shopping season. 🙂 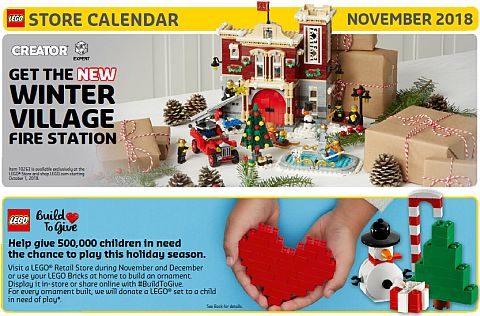 Interestingly, the LEGO Store Calendar for November doesn’t show us much about upcoming promotion. This was also a case last month, when the Double VIP Points period wasn’t announced in the LEGO Store Calendar, but only via email to LEGO VIP members and through the homepage of the Online LEGO Shop. I hope this is not going to be a trend, as it will be much harder to prepare for LEGO purchases. 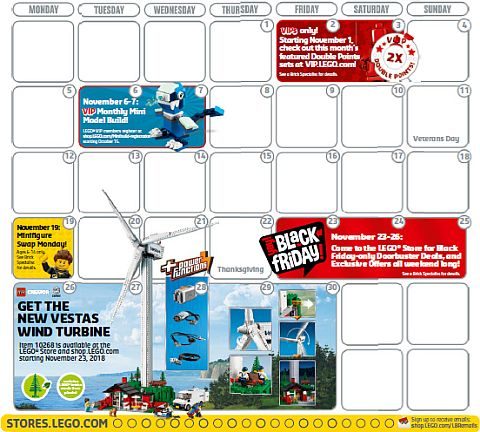 The LEGO Store Calendar is only promoting the #10263 the LEGO Creator Winter Village Fire Station, and also mentions the Build to Give campaign. Visit an official LEGO store during November and December, or use your own LEGO bricks at home to build a holiday ornament. Display your creation in-store or share online with the hashtag #BuildToGive. For every ornament built, LEGO will donate a LEGO set to a child in need. The calendar also hints that there are going to be Double VIP Points offers on select sets throughout the month. You can find these offers at the homepage of the Online LEGO Shop. 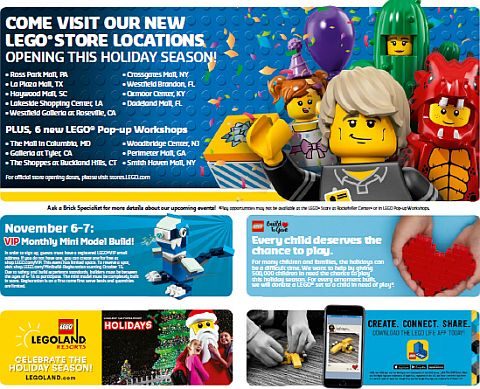 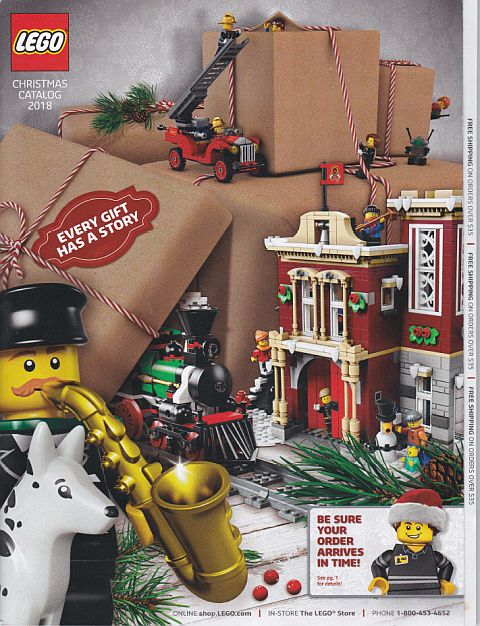 ➡ LEGO CHRISTMAS CATALOG: Those of you who use the Online LEGO Shop should have also received the 2018 LEGO Christmas Shopping Catalog by now (I got mine just a couple of days ago). As usual, it is organized nicely to help kids (and kids-at-heart) select sets from different categories and make up their wish lists. The first couple of pages have a very nice display, featuring all the currently available LEGO Winter Village sets (#10254 LEGO Winter Holiday Train, #10259 LEGO Winter Village Train Station, and #10263 LEGO Winter Village Fire Station). Then, the LEGO Advent Calendars and other small holiday sets are mentioned, followed by featured sets from various themes. Particularly noteworthy is a two-page spread towards the middle of the catalog, featuring “Great sets for your wish list, many retiring soon!” It includes sets like the #10247 LEGO Creator Ferris Wheel, the #10246 LEGO Creator Detective’s Office, the #75060 LEGO Star Wars Slave I, the #75202 LEGO Star Wars Mos Eisley Cantina, , the #42056 LEGO Technic Porsche 911GT3 RS, and some smaller LEGO City, LEGO Creator, LEGO Disney, LEGO Friends, LEGO Ideas, and LEGO Minecraft sets. It’s worth taking a look at these older sets and get the ones you like before they get retired at the Online LEGO Shop. 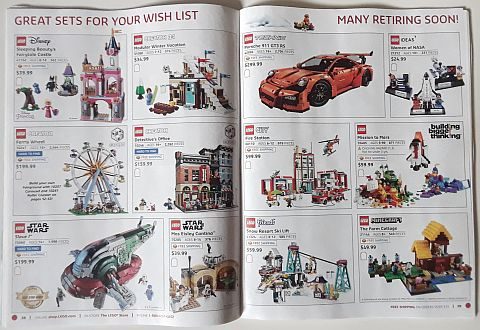 It is interesting (and worrisome?) that the 2018 LEGO Christmas Catalog does not mention any holiday specials or promotions either. However, we do know that there are at least a couple of exclusive limited edition Christmas sets, including the #40292 LEGO Christmas Gift Box, and the #40293 LEGO Christmas Carousel. At this point, it is not clear however how, when, and where these will be available. We will keep an eye on them though, as both are really sweet, and should be available at some point via official LEGO stores and the Online LEGO Shop. 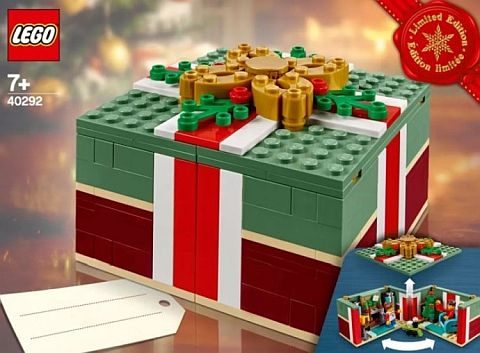 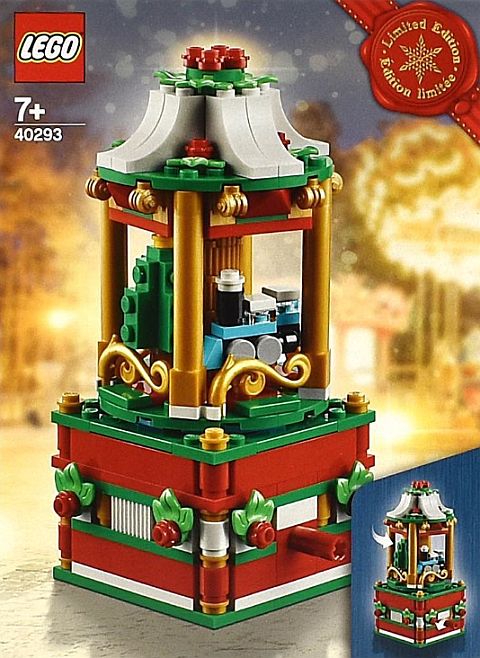 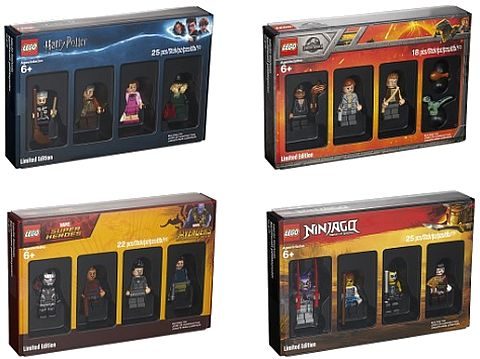 ➡ LEGO BLACK FRIDAY PROMOTIONS: November 23-26 we can look forward to the Black Friday promotions at both official LEGO stores and the Online LEGO Shop. The details of the offers available on these days will be announced later.

➡ LEGO IDEAS POP-UP BOOK AVAILABLE: The beautiful #21315 LEGO Ideas Pop-Up Book is now available! We have talked about this set extensively (see: LEGO Ideas Pop Up Book Coming Soon!), and here is the official description: Build, play and display the classic fairy tales Little Red Riding Hood and Jack and the Beanstalk with the #21315 LEGO Ideas Pop-up Book! This first-ever buildable pop-up book made from LEGO bricks opens to reveal the famous scene of grandmother’s forest cottage featuring opening door, bed and kitchen area. Recreate the scene when Little Red Riding Hood meets the wolf, or swap out grandmother’s cottage for the scene of the giant’s castle in the clouds. This collectible toy features enough bricks to build both scenes, or you can even build a scene of your own and makes a perfect creative gift. This LEGO set includes a booklet with a short history of pop-up books, a condensed history of each fairy tale in the set, as well as information about its fan designers and LEGO designers. Includes 4 new-for-November-2018 LEGO minifigures: Little Red Riding Hood, Grandmother, the Wolf, and the Giant. Also includes 1 new-for-November-2018 microfigure: Jack. Pop-up book measures over 7” (20cm) long and 5” (13cm) wide when closed, and over 11” (28cm) wide when open. 859 pieces. Price: $69.99 – BUY HERE 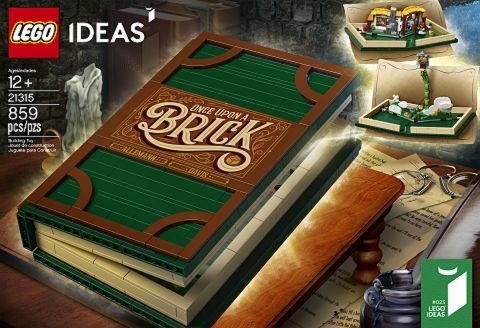 ➡ LEGO CREATOR VESTAS WIND TURBINE: The #10268 LEGO Creator Vestas Wind Turbine is a re-release of an older, limited distribution set we talked about here, and will be available on November 23rd. Here is the official description: Celebrate green energy innovation with the #10268 LEGO Creator Expert Vestas Wind Turbine. Developed in partnership with Vestas, this detailed, motorized LEGO model captures the elegance and graceful movement of a traditional wind turbine and features a new-for-January 2019 spruce tree, manufactured from sustainably sourced plant-based plastic. At approximately 39” (1m) high, the structure towers above a wooded hill and a house with furnished patio, mailbox, flowers and a white picket fence. Turn the nacelle left or right and switch on the included Power Functions motor to rotate the adjustable wind turbine blades and illuminate the cottage’s porch light. This collectible model has been designed to provide a challenging and rewarding building experience with a touch of nostalgia and makes a great display piece for the home or office. This big LEGO set also includes a Vestas service vehicle and 3 minifigures: 2 Vestas service technicians kitted out with safety helmets and a woman, plus a dog figure. Measures approximately 39” (100 cm) high, 24” (62cm) wide and 12” (31cm) deep. 826 pieces. Price: $199.99 – BUY HERE 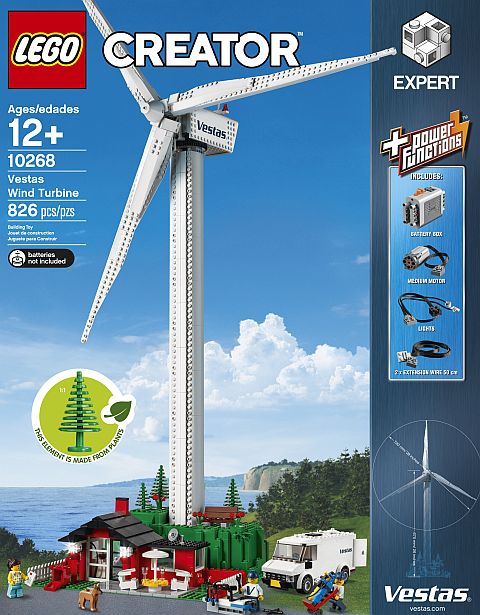 ➡ OTHER LEGO HOLIDAY SETS: Other than the LEGO Winter Village sets, and the LEGO Holiday Advent Calendars, there are a couple of brick-built Christmas ornaments for this year; the #853796 LEGO Penguin Holiday Ornament and the #852815 LEGO Gift Holiday Ornament. Both little builds can be placed in the included transparent plastic bauble, and hang it up with a red ribbon (also included) to make a perfect Christmas decoration. In addition, there is also the #40274 LEGO BrickHeadz Mr. & Mrs. Claus set. They are all available at the seasonal items section of the Online LEGO Shop. 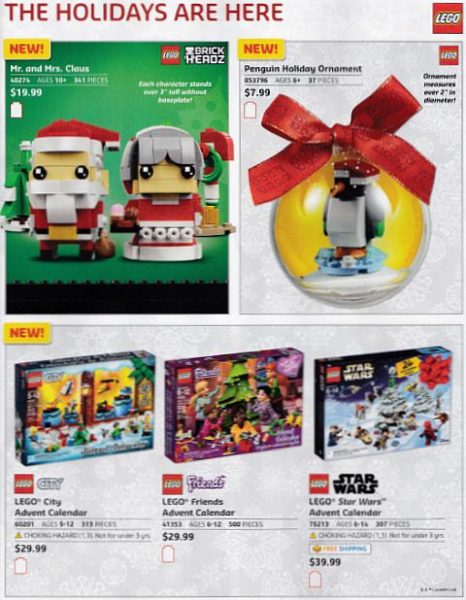 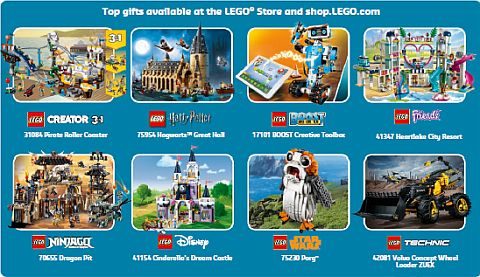 As we discussed yesterday, the LEGO Holiday Gift Shop is now open, which is a great place to find everything from small stocking stuffers and holiday-themed sets, to some of the most popular and sought after exclusives. Sets are organized into various categories, so it’s easy to find gifts for LEGO fans with different building styles and interests. You can access the LEGO Holiday Gift Shop through the homepage of the Online LEGO Shop.