by Thita (admin) on December 25, 2018
in Featured LEGO Creations

Merry Christmas and Happy Holidays! Hope your family has a cozy and peaceful holiday season with lots of fun, and – since we are LEGO fans here – lots of LEGO building! To celebrate the season, one of our favorite LEGO builders, Jason Allemann created a fun little mechanical LEGO scene with Santa flying over the landscape in a hurry to make sure all presents are delivered on time. 🙂 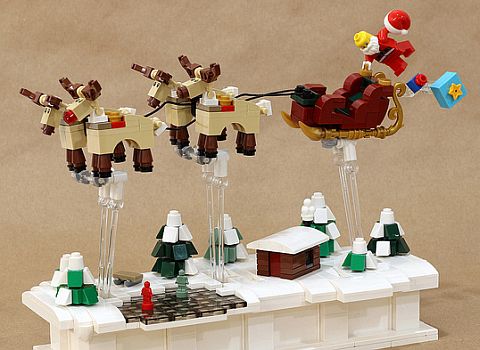 For this LEGO creation, Jason used the reindeer from the #10245 LEGO Winter Village Santa’s Workshop set that was released in 2014. Jason modified the sleigh to make a smaller version, as the original one is too big and heavy for the flying action. Watch the video below to see how it all works!

As Jason mentioned in the video, the mechanism to make the sleigh fly is the same as in the LEGO Pursuit of Flight project Jason posted on LEGO Ideas earlier this year and we talked about some time back (see: LEGO Ideas Updates & Great Projects). As a side-note, if you would like the project to have a chance to become an official LEGO set, it is still gathering support, so remember to vote. In the video below, Jason demonstrates how the mechanism works, so you can build it yourself, and fly your own planes, spaceships, birds, or even Santa with his reindeer!

Another feature worthy of note in both projects is the use of forced-perspective techniques to make it appear that the flying objects are high up in the air. This is achieved by using micro-scale for the landscape, and a larger scale for whatever is flying over the landscape. This is an especially useful technique when you don’t have much space to separate the objects that are meant to be at great distance from each other. 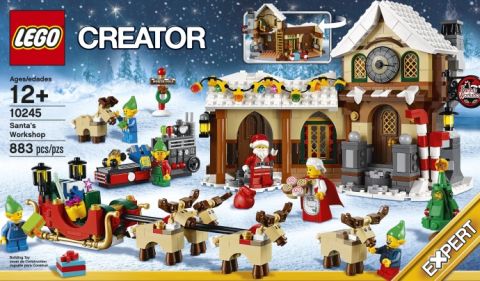 While Jason designed the flying Santa and reindeer as a standalone Christmas display, it could also be incorporated in a LEGO Winter Village scene with some modification. You will just need to hide the box with the mechanism in the landscape, or one of the buildings. It could be a fun Christmas project for LEGO fans and families.

What do you think? How do you like the flying Santa and reindeer? Are you planning to build it, or build something similar with other flying contraptions? Feel free to share your own LEGO Christmas projects and decorations in the comment section below! 😉